This ‘smart’ monitor also lets you watch streaming content at up to Ultra-HD resolution. 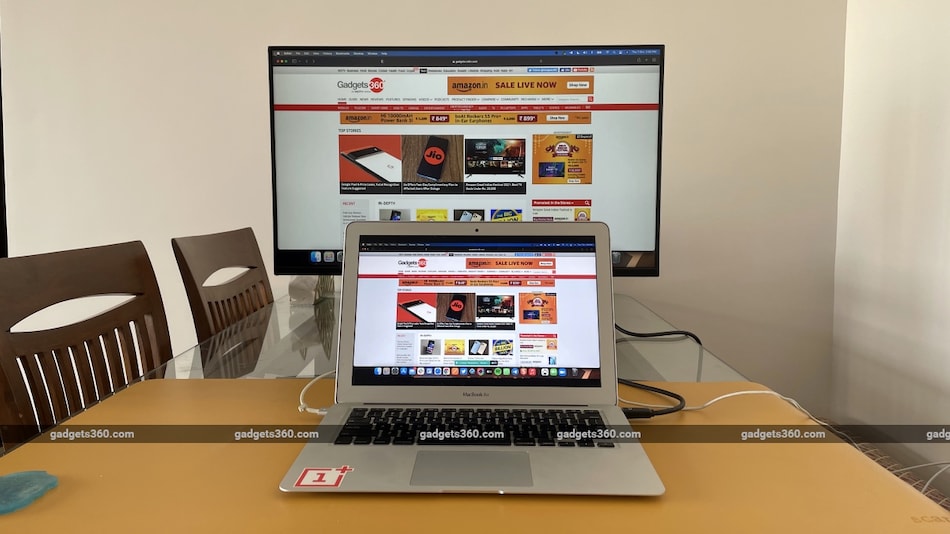 Televisions and monitors are often used interchangeably because of their similar hardware, but it isn't often that you come across a product that can serve for both productivity and entertainment with equal competence. The design and core specifications of monitors are often focused on productivity, with bright, sharp, and high-resolution, but modestly sized panels. However, Samsung's new ‘smart' monitor appears to be equally at ease if you want to watch some Netflix after your work is done for the day.

Priced officially at Rs. 33,499 in India, the Samsung 32-inch Ultra-HD Smart Monitor M7 is touted by the company as a ‘do-it-all' screen. As the name suggests, it's a 32-inch productivity-focused monitor for work, with an Ultra-HD (3840x2160-pixel) LED HDR panel, plus smart functionality that means you can also use it as a television. This could be right for anyone with very limited space, who wants a single unit that can work comfortably as a monitor as well as a smart TV. Is this the most versatile 32-inch monitor you can buy right now? Find out in this review.

The Samsung Smart Monitor M7 has a 32-inch Ultra-HD screen with a 16:9 aspect ratio

Although there are plenty of Ultra-HD monitors around the 32-inch screen size, TVs of this size with this resolution are extremely uncommon. Naturally, this is because of the need for sharpness and precision with a monitor that you'd sit much closer to than a TV. The Samsung 32-inch M7 monitor is meant to be used primarily with a computer, but its features and specifications make it well suited to serving as a television, too.

The Samsung 32-inch M7 monitor has an Ultra-HD (3840x2160-pixel) Vertical Alignment (VA) LED-backlit LCD screen, with the 16:9 ratio that is seen on practically every modern television. The screen has a typical brightness level of around 250 nits, a maximum refresh rate of 60Hz, a response time of 8ms, and support for high dynamic range content up to the HDR10 format. These specifications aren't typically suited for enthusiast-level gaming; the monitor is best used for everyday productivity, as a large screen to replace or supplement the smaller one on your laptop. Of course, the resolution and HDR support also makes it suitable for occasional TV use.

When it comes to design, the Samsung 32-inch M7 monitor is simple and discreet, keeping the focus on the screen. It has thin borders all around, a small Samsung logo at the bottom, a slim profile, and just a few ports and inputs at the back. For connectivity, the Samsung M7 monitor has Wi-Fi 5 and Bluetooth 4.2. There are two HDMI 2.0 inputs (one supports ARC); a built-in USB 2.0 hub with two Type-A ports (and one more for service functions); one USB Type-C port; and a power inlet for the included power cable.

USB Type-C connectivity is particularly interesting and versatile here, since it allows for power up to 65W, data, and a display signal. You can use the monitor to power a laptop or smartphone using the port, with the right cable. The USB Type-A ports can be used to power devices, and also to play content on the TV from a storage device.

A remote is included with the Samsung M7 monitor, which is needed to control the smart interface and other functions

The sales package includes a centre-mounted stand that raises the screen of the Samsung M7 monitor by around 10cm. Although the monitor stays firmly in place with the stand, I did notice that it swayed a bit because of my ceiling fan. This wasn't bothersome for me, but the constant slight movements might be an issue for many. You can also wall-mount the monitor, if you prefer, but a wall-mount kit isn't included in the box.

The Samsung M7 smart monitor weighs 6.5kg with the stand attached. A 1.5m power cable, an HDMI cable, and a remote are included in the box. Since this is also meant to be used as a TV, the Samsung M7 monitor has speakers built in, although the output isn't mentioned and no major audio formats are supported by the UI directly.

As the name suggests, the Samsung 32-inch Ultra-HD Smart Monitor M7 is a ‘smart' screen, with its own software interface and access to apps. The monitor runs on Samsung's Tizen operating system, which gives access to a number of apps and games, including major streaming services such as Netflix, Amazon Prime Video, Disney+ Hotstar, Apple TV, and various others focused on Indian language content. When not in use as a screen for your computer, the monitor can therefore double up as a capable smart TV.

You can, of course, just stream media and content from a connected computer, but the smart connectivity adds versatility and ease of use; simply kick back at the end of the work day and use it with a remote, like you would a television.

Other key features include mobile connectivity options such as Apple AirPlay 2, Samsung's Wireless DeX for use with its smartphones and tablets, and Office 365 apps when used with an active subscription. If you only use Office apps, cloud storage, and a Web browser, you don't even need to connect a PC to the Samsung M7 monitor; this can be used as a terminal for your work. That said, such use cases would be limited and niche, since you'd likely have your computer at hand as well.

Most popular streaming services have apps available for the Samsung M7 monitor, including Netflix and Amazon Prime Video

The monitor has Bixby and Google Assistant support. There is also auto source switching, which changes to a newly connected device when it's plugged in. Google Assistant worked well on the monitor, with the same functionality I've seen on most smart TVs.

AirPlay was particularly useful for me on the Samsung M7 monitor, as I was able to use it both to wirelessly mirror my MacBook Air's screen, and to quickly watch content on the M7 monitor while using my iPhone 12 mini (Review) as a controller. The feature worked well for me, activating within seconds and with no drop-offs or instability in the connection.

Usefully, the Samsung M7 monitor includes a remote, with which you can control every aspect of the device. The remote has a d-pad for navigation, a microphone button to invoke the voice assistant, navigation and playback buttons, volume and channel controls, and hotkeys for Netflix, Amazon Prime Video, and the Web browser. All apps natively support up to Ultra-HD HDR10 content, and support for AirPlay 2 means that you can wirelessly connect to Apple devices.

Most monitors use HDMI for connectivity to source devices, and you could really use any monitor as a television simply by plugging in a streaming device or set-top box. However, thanks to its embedded operating system and ability to function as a standalone device with independent Internet connectivity, the Samsung M7 is perfectly suited for use as a 32-inch television after work hours.

I had the Samsung M7 set up at my home work desk, primarily to be used as a computer monitor for this review. It was positioned around 1m away from me, and directly behind my MacBook Air. For connectivity, I used an HDMI-to-Mini DisplayPort cable most of the time, but I also occasionally used AirPlay.

I had the display optimised for use as a monitor; I got a full-HD (1920x1080-pixel) signal on the monitor in both cases, due to the limitations of both AirPlay 1 and the Mini DisplayPort cable. To test the Ultra-HD capabilities of the Samsung M7, I relied on content from Netflix, Amazon Prime Video, and Apple TV+.

Indeed, the Samsung M7 functions best as a monitor for your laptop, and despite the fact that I was limited to full-HD, the monitor significantly enhanced my daily productivity. I found the picture to be sharp and clear from a viewing distance of around 1-1.25m, allowing me to clearly read text against backgrounds of all colours, and also view images clearly.

The Samsung M7 monitor runs on the Tizen operating system, which is also seen on Samsung smart TVs

I was able to use all the screen real estate optimally for writing, image editing, Web browsing, and the occasional watching of videos. Colours were accurately portrayed, motion was clean and artefact-free, and the size of the screen itself made all the difference in improving my work and productivity.

Switching to the smart UI, it was a unique experience for me to watch typical streaming television shows and movies on a 32-inch screen in Ultra-HD resolution. Although Ultra-HD content is best enjoyed on larger screens at typical TV viewing distances, I watched streaming content on the M7 monitor at the same distance as I used it for work while sitting at my desk.

Watching episodes of Somebody Feed Phil in Ultra-HD, and Parks and Recreation in full-HD on the Samsung M7 monitor was an interesting experience; since I was watching from much closer than I'd have typically placed a 32-inch television, the screen didn't seem too small, and it didn't put too much strain on my eyes either. Colours with standard dynamic range content seemed a bit dull, but HDR content looked better despite the low peak brightness, and the sharpness of Ultra-HD content was prominent and easy to distinguish.

Sound quality on the Samsung Smart Monitor M7 isn't particularly special, or even anything more than ordinary. However, I found it very useful to have a built-in speaker system on the monitor, and it was considerably louder than the speakers on my laptop. At moderate-to-high volumes, the sound is more than capable of handling regular computer functions, although you might want to use good headphones if you're listening to music. For TV viewing at around 1-1.5m from the screen, the sound was just about adequate.

Televisions and monitors are typically considered separate product categories, but the Samsung Smart Monitor M7 is a great example of how these can merge into one. Although positioned and functioning best as a monitor, the Samsung M7 works well as a television for occasional viewing. It's also a rare example of a 32-inch Ultra-HD screen that can directly and capably stream from sources such as Netflix, Amazon Prime Video, Disney+ Hotstar, and Apple TV.

Priced at Rs. 33,499 in India, the Samsung M7 monitor is a bit expensive for what's on offer, and sound quality is ordinary at best for TV viewing. However, these are small drawbacks on a device that is otherwise excellent at what it does; if you're looking for a productivity and entertainment focused monitor, or even a 32-inch Ultra-HD TV, the Samsung M7 is worth considering, and could particularly come in handy in small spaces where you want to combine both functions into a single device.