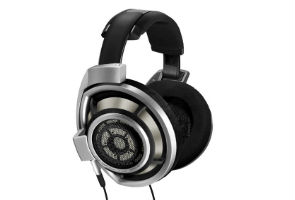 Highlights
Sennheiser has always been the go-to brand for high-end audio. Their HD series of headphones have long been popular amongst audiophiles with the HD 800 being the flagship of the series. Released in 2010, the HD 800 was the successor to the HD 650, which was a highly popular monitoring headphone. Let see if the HD 800 pushes the envelope further.

Design
As the Sennheiser's flagship headphones, the HD 800 takes over from the HD 650 and comparisons are inevitable. While the HD 650 was sublime in its own right, a design flaw meant the ear cups were not the most comfortable ones and it had a tendency to crush one's ear cartilages. With the HD 800 these problems have been resolved. In fact, almost nothing from the HD 650 has been carried over including the price - Sennheiser is charging a bomb for the HD 800 in comparison to the relatively affordable HD 650.

So how does all this work? For starters, Sennheiser provides massive ear cups which would sit well with any person, maybe even Mr Spock's large and pointy ears.

The HD 800 is designed for comfort. It's just so comfortable, that if one puts these on for even a couple of hours there's no switching back to any other headphones. The fabric which layers the insides of the ear cups is made of a mesh like micro-fiber which is immensely plush. Our ears were literally blanketed in a sea of velvet and it was indisputably very cozy.

Sennheiser makes no bones about the HD headphones' size and, in fact, they believe it to be an advantage. According to them, the HD 800 boasts of the largest transistor ever used in a pair of headphones and while we cannot verify this claim we can confirm that it is certainly amongst the biggest ones.

In fact, the wheel like transistor, which is 56 mm thick, is so large that we can see it from the outer grill, which covers the outer half of the ear cup.

Another interesting facet is in the driver assembly for which Sennheiser has devised a special plastic mount on which the drivers sit.

Needless to say, Sennheiser has left no stone unturned with HD 800. They have even managed to provide replaceable drivers, which are perfectly tuned.

Even the Y-cable (one for each ear cup) is made of special cloth like material and is oxygen free and silver-plated. These wires can be replaced but they use a proprietary connector.

As these are studio monitors for all intents and purposes, we get a 6.3 mm cable instead of a 3.5 mm cable. Unfortunately, Sennheiser does not provide a 6.3mm to 3.5 adaptor but these puppies are almost certainly destined for studio use so not many buyers will be bugged about this problem.

Overall the construction quality is immensely high-end, which is only as it should be for a set of headphones which cost almost Rs 80,000.


Sound Quality
When one talks about studio monitoring headphones, the first question the sound engineer will ask you is "how flat is the frequency response?" But with the HD 800 it's just not about the flatness of the frequency response. It covers a sonic spectrum ranging from 5Khz to 5100Hz, which is pretty damn impressive.

But what really defines the HD 800 is the open richness of the sound. Frankly, its in a league of its own. We don't even have a clear reference point - the closest is the iconic AKG K-1000, now discontinued.

We would go as far as to say that these headphones behave more like loudspeakers. The resonance of sound, the resolution and the punch is more akin to a high grade loudspeaker which is generally more detailed than a headphone. While this is true, it still cannot compete with a studio monitor but it is the closest thing one will find in a headphone-like form-factor.

The HD 800 gave us a sense of being cocooned by sound, with the sound hitting us from the front rather than left or right. The experience is that of being in a sound proof recording studio. This is because of the uniquely designed driver diaphragm which is angled in a particular way so that the sound approaches from the front rather than the sides.

We must also mention that these headphones come with 300 ohms impedance rather than the standard 600 ohms impedance, which means they may not adapt well with MP3 players, but newer iPods would be able to provide enough juice for a decent audio output.

As these are super high quality speakers, we strongly advise you against testing them via a regular laptop output or a MP3 player. These 'micro-studios' are best heard through an audiophile grade audio input with the ability to utilize the HD 800's sonic capabilities.

So, to test these headphones, we plugged in the M-Audio ProFire Firewire audio interface, which is normally used to record tracks through various digital audio workstations like Pro-Tools and Logic.

We picked our usual set of tracks for testing, but this time around they were encoded in the FLAC lossless format. We also picked tracks from some local Indian bands whose production values are not of the highest quality, and for the last bit of testing we tried our hand at recording and mastering a layer of over dubbed guitars and drums - which, ahem, we recorded on our own. Yes, we may be geeks but we can also strum a mean guitar.

As usual, top of the playlist was the Guns n Roses classic Sweet Child O' Mine and, boy, are we at loss for words to describe the experience. It was as if were in the studio itself. Formidable though Slash's guitar sounded, it never stole the limelight, which it does on other headphones. With the HD 800, we experienced the whole sonic structure of Sweet Child O' Mine in its glorious entirety with Duff Mckagan's bass thudding in the background and Steven Adler's crisp and textured cymbals. Even the famous Axl Rose wail was perfectly balanced - neither overly timid nor ear piercing.

Next up was John Petrucci's Glasgow Kiss. This is a purely guitar instrumental with no vocals, accompanied by only drums and a helluva lot of bass. At least, that's what we assumed as we had heard the song numerous times before. This time around the bass just felt balanced. It never once jarred and it let John's sublime lead guitar technique do the talking. For the first time we discovered how John had intended the song to sound. We have tested this song on numerous headphones and the sound was always colored, but with the HD 800 what we heard was a perfectly balanced and flat textured sound.

Song #3 was the Cream classic, Sunshine Of Your Love. Eric Clapton's iconic 'woman tone' was singing in full glory, but the most amazing facet of the sound was the detail of Clapton's vocal textures, the ambient feel of Ginger Baker's drums and the sheer presence of Jack Bruce bumbling away on his bass guitar. As audiophiles, this is how we envisioned the song and this rendition was pretty close to the subtle warmth of the vinyl version.

After playing some of the most iconic musicians in history we opted to listen to an Indian group who are relatively inexperienced. Enter Delhi based alternative rockers Them Clones and their very first single, The Bomb Song. The premise behind testing The Bomb Song was simple - if there were any mastering glitches, then HD 800 ought to detect them as Sennheiser claims they will, being the most advanced headphones on the planet and designed for mastering purposes.

We could not muster up a FLAC file for The Bomb Song so we made do with a 320 Kbps MP3 track. Frankly speaking, we did not find a lot wrong with the mix of The Bomb Song as most frequencies were adequately balanced and the song sounded very energetic. If pressed, we'd lock our corsairs on the solo as the lead guitar did not sound loud enough and the vocals tended to clip at times in the battle for headroom in the sonic mix. But that's about it. But the fact that we found these errors was pretty fantastic as our trusty Beyer Dynamic monitoring headphones didn't. Suffice it to say, the sound engineer was not using the HD 800 while mastering the tracks.


We again encountered a similar experience when we recorded our own tracks. We recorded multiple layers of guitars bass and drums. All the guitars were layered over each other. From crystal clean tones of a Stratocaster to the down right nasty distortion of the Les Paul, we had it all in one, where each track overlapped the other. It was a recipe for disaster as the mix would contain too many tracks, which would just not sound right even if the levels were moderately balanced. As expected, these tracks sounded like a hotchpotch as only the distorted parts would pop and the cleaner, mellower sections would get lost. Thankfully, heard through the HD 800, all tracks were audible enough which was a good thing and also let us know where the leveling was needed.

On the whole reviewing the Sennheiser HD 800 was a rewarding experience. For the first time, we got a clearer picture of how music was recorded and how the music of musicians was really meant to sound.

Verdict
The Sennheiser HD 800s are by far the most sonically advanced headphones in the world. Though they truly belong in the studio, audio connoisseurs would do well to invest in a pair to listen to songs the way the singers meant them to sound.

While all this is good, there are a few stumbling blocks like its ungainly massive size, poor MP3 player connectivity as it neither comes with a 6.3m too 3.5mm adaptor and its low impedance which makes prohibits its MP3 compatibility. But the biggest flaw in this breathtaking package is its gut wrenching price tag of Rs 78,000.