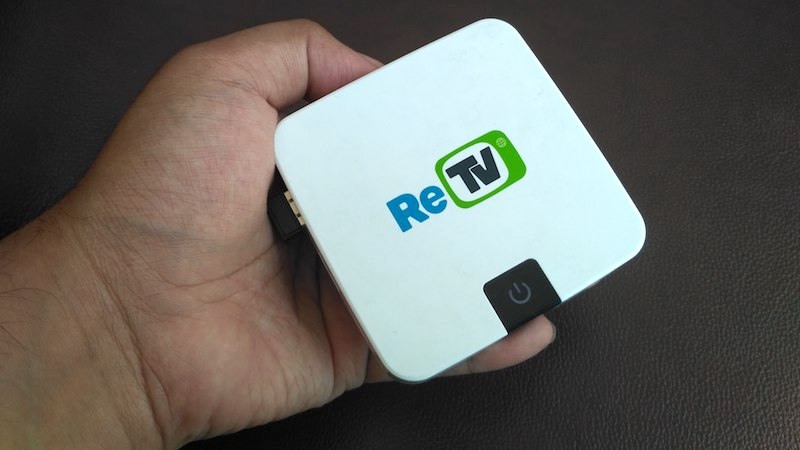 Over the years, we've looked at a good number of Android-based TV set-top boxes such as the Amkette EvoTV MC, the EvoTV 2 4K, the Amazon Fire TV, and also streaming dongles such as the Google Chromecast, and the Teewe and Teewe 2.

Today, we're looking at a new smart TV box called the ReTV X1. Its retail price is Rs. 4,999, but you can get it for Rs. 3,999 if you pre-order before February 10. The ReTV X1 runs Android like most other devices of its type but its interface is Kodi, formerly XBMC.

Kodi is one of our favourite video management services, and the way it's implemented here makes it pretty easy to find content from the Internet and play it at home, unlike many of other devices where the focus clearly on downloaded content. In fact, we'd go a step further and say that the ReTV X1 is the first Android set-top box we've used which makes access to BitTorrent streaming as easy as possible - think of it as the hardware version of Popcorn Time.

So how does it measure up? Read out review to find out.

ReTV Design
The ReTV X1 is a small white box; about three inches square and a little under an inch tall. The base has a rubberised ring that keeps it from slipping, and the overall look is sleek. It has HDMI and composite video outputs as well as a LAN port, two USB ports, a microSD slot, and a power inlet. There's a small power button on the top. Overall, the hardware is good-looking, but the power plug for the ReTV does not fit properly - it's too long for the socket on the unit, which means that a part of it sticks out at all times. This is out of sight, and did not impede function in any way, but it bothered us.

The remote is a comfortable size, with a bulge near the bottom that makes it fit quite nicely in the palm of your hand. It has a power button, then two volume buttons, a four-way direction pad with an OK button in the centre, then back and menu buttons. Finally, there are buttons labelled home, mouse, subtitles, favourites, and mute. Most of these are self-explanatory. ‘Mouse’ is supposed to toggle an air-mouse feature, but the ReTV X1 is not designed to support the air mouse at all - in fact, if you press this button, an error message pops up on screen asking you to disable it. Making matters worse, the default state for the remote is to have the mouse function on. The moment you start using the ReTV X1, you're greeted with an error message, which is a terrible onboarding experience.

The remote comes with a USB wireless receiver is hidden in a recessed hollow inside the body of the remote. The manual mentions that there's a dongle, but not where it is hidden. Because it wasn’t in an obvious place, we actually had to call the company for tech support to help get started with the ReTV X1. You’ll need to have this receiver plugged into the ReTV X1 at all times in order to use the remote, which means that you're down to a single USB port for your storage needs. The idea of having the dongle permanently attached to the otherwise nice-looking device was jarring. It's a complaint we had with Amkette's Evo TV as well - it's not like the remote is an optional accessory that you might not use.

The problem is that the company is using what looks to be an off-the-shelf remote that has some features it didn't want, but even so, it would have been nice if the dongle was integrated into the set top box.

ReTV features and specifications
The ReTV X1 has a quad-core 2GHz CPU capable of 4K video playback. There’s 8GB of storage, 5GB of which is available to the user. Although the device is running Android 5.1 Lollipop, you wouldn't know it because of the heavily customised interface. As we stated above, it's based on Kodi, and is a total reskin of the Android experience.

Even small details like the settings, downloads, and so on, are managed by the Kodi interface, and the resulting experience is focussed on content, not apps. In that sense, the UI feels more like an Amazon Fire TV than something like the Amkette Evo TV – with the former, the UI is built around showing you content regardless of source, while the latter highlights the apps and it's up to you to find what to watch. The home screen is a grid of content, showing you movies and TV shows. You can navigate to anything you want to watch, and start playing it, whether it's on Hotstar, Netflix, or even being streamed from The Pirate Bay.

The ReTV X1 has a number of interesting features. It supports BitTorrent streaming and downloading without having to install any additional apps. There’s also something called FastForward, which is a service that essentially downloads BitTorrent media to a cloud storage location for you - at a much higher speed than you'd get at home. You can then stream that content directly from ReTV's cloud, which is a smoother experience.

Of course, there's the question of whether these features are legal - the home screen even incorporates little badges that show if a movie you're looking at is still in cinemas. ReTV displays a disclaimer the moment you go outside its services such as Hotstar, Spuul, and so on, to warn you that it is not responsible for the content you find and that you should not watch anything if you don't have a license for it.

This fig leaf aside, you're not going to get in trouble for watching a pirated movie, and unless ReTV gets to be a really big name, it's unlikely that we're going to see it hauled into a court of law either.

Other features include the ability to run Android apps including games, mirror content from your phone or PC, and download videos to the ReTV X1 and play them locally. All of these work well enough, but the interface is clearly not designed with these functions as primary use cases. Getting to Android apps means navigating to another section of the interface, and the whole process feels kludgy. If you're only interested in streaming and casting from your phone or PC, just buy a Chromecast.

ReTV perfomance and usability
The ReTV X1's focus, clearly, is on making it easy to find and watch movies on the Internet - regardless of the source. So, for example, on the homescreen in the movies tab, you might see a poster for The Jungle Book. Click on it, and you can see the poster, a description of the movie, more metadata, and the option to watch the movie.

The ReTV X1 then shows you the different sources it's available from. The ReTV X1 polls a wide number of sources, including Netflix, Amazon Prime Video, Hooq, Spuul, and all the other major video streaming providers. In the case of The Jungle Book, it only shows HotStar, while in the case of something like Andaz Apna Apna, it showed Netflix, HotStar, and Spuul. In the case of Arrival, it showed that the film is not available on any streaming service. Once you click on a film, you can also choose to search for the film on YouTube, DailyMotion, The Pirate Bay, YIFY, and KickAss Torrents, to name a few.

Watching a show or a movie is straightforward, whether you're using HotStar or streaming a torrent. It's worth pointing out that you're not likely to "accidentally" watch a torrent - you need to go through a couple of menus and manually enable each torrent site before you can search it,and at each stage you get the disclaimer we mentioned.

Going through the different menus, finding movies or TV shows that you want to watch, and playing them - on any service - is pretty easy and the whole experience is good. It works in a couple of different ways though, which is worth going into. Some services, including Sony Liv, Eros Now and HotStar, play directly through the ReTV X1 interface. That means that if you found The Jungle Book and chose HotStar, it will ask you if you already have an account, or load a page letting you sign up. You can enter your username and password, and then whenever you try and play a HotStar video, it will just start playing within the home interface, without having to load the HotStar app. For a couple of other services - Netflix, Hooq, and Amazon Prime Video - it loads the respective app instead.

If you choose to play a torrent, the ReTV X1 first loads a magnet link and starts buffering. That's where the FastForward feature comes into play - you can click on the FastForward button when buffering a magnet link, and this sends the file to ReTV's cloud, from where it can be served to you quicker. You get 25GB of free FastForward cloud storage with your ReTV purchase in the pre-order bundle, and each time you use the feature, you're shown how much data will be consumed.

You can buy additional data priced at different tiers ranging from Rs. 49 for 5GB up to Rs. 399 for 60GB. While that might be optional, you also have to pay Rs. 99 per month or Rs. 899 per year for the ReTV service after the first year which is free with each unit. While that's not an unreasonable figure, it’s hard to justify on top of what you already pay for Netflix, HotStar, etc. On the other hand, you could consider it a small fee for a service that lets even the most technophobic person find and use BitTorrent content quickly and easily.

Verdict
The ReTV X1’s main appeal is its easy-to-use interface, which puts the focus on your content rather than your apps. It does a good job of making it easy to find content across different services. If you're subscribed to more than one streaming service, then you've gone through the hassle of searching in one app, exiting it, launching the next one, and so on until you finally find something to watch.

ReTV also makes it very easy to find movies on different torrent sites, which is not something we endorse even though, let's face it, everyone in India does it, at least from time to time. Whether the company will be able to continue to offer this functionality as it grows is an interesting question, but for now at least, the ReTV X1 is basically a really easy-to-use Popcorn Time box.

At Rs. 3,999, this doesn't sound like a bad deal, if a little pricey - though it's certainly not great value for money if you only need a device to stream content that you're paying for yourself.