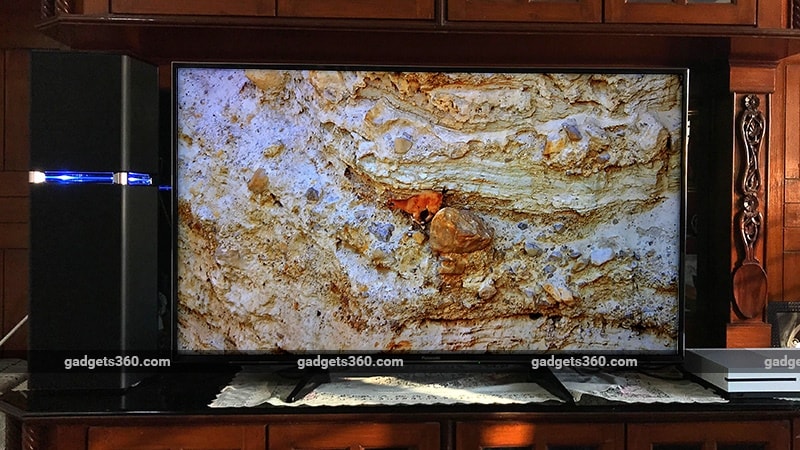 Panasonic has been making some interesting choices with regard to its TVs. It sold some of the best plasma panels all the way up to 2014, long after all other companies had moved on to LCDs. With 4K HDR TVs now becoming mainstream, Panasonic has recently launched its EX600 range of in three sizes: 43, 49, and 55 inches. The latter two models come with a bundled wireless wireless home speaker, the Panasonic SC-UA7.

We had the 49-inch TH-49EX600D TV for review, and it boasts of some interesting features. It runs Firefox OS, has loads of apps in its library, and supports common HDR formats including HDR-10 and HLG. It’s priced at Rs. 1,41,000, which seems a bit high for a 49-inch LCD TV, even if it does offer a bundled speaker. Does its performance justify the price? That’s what we sought to answer through our review process.

The Panasonic TH-49EX600D looks simple enough from the front, with a small frame, and the Panasonic logo with a power LED centred at the bottom of the front. The device is quite thick when compared to other manufacturers' modern TVs, so you can expect to have quite a bit of space between the wall and the display, should you choose to mount it that way.

We used it with its stands, which give you some interesting attachment options. The TV has a pair of slots for the stands close to the bottom edges, and also a second pair of slots closer to the centre. This allows for a small degree of adjustability which is always good. You could make space for a small set-top box below the TV, or choose what's more comfortable. It doesn’t make any difference to the unit's balance or weight distribution.

You can choose to connect the TV to the Internet wirelessly using Wi-Fi, but there’s an Ethernet port as well, if that’s your preference. On the back, besides the Ethernet port, the TV also has an antenna input, component video and audio inputs, two HDMI 2.0 ports that support Audio Return Channel (ARC), and finally an optical audio output.

On the rear-left you get two USB ports (one USB 2.0 and one USB 3.0), a headphone jack, and another HDMI port. We couldn’t get HDR functionality to work with our source devices plugged into the side HDMI port, so you'll have to reach around the back when needed, and you can have only two HDR-capable devices plugged in at any given point of time. Finally, the standard power, input select, channel and volume buttons are located behind the lip of the panel, on the right.

Despite its dated looks, the Panasonic TH-49EX600D does offer a range of usable connectivity options, which make it well specced, even for its price.

Firefox OS might feel like an offbeat choice at first, but it has always been pretty functional as far as a smart TV OS goes. You have a good range of apps to start off with, including Netflix, YouTube, and Amazon Prime.

If you dig a little deeper in the app store, you’ll find almost all major TV entertainment apps that you might want. Spuul, DailyMotion, BoxTV, and BIGFlix are all available. What's sorely missing is Hotstar, though we wouldn’t really blame Firefox OS for this, considering that this service is missing from a lot of smart TV platforms. Besides that, there is a range of apps and services for sports, news, kids, and more.

The TV itself boasts of an IPS panel with wide viewing angles that we verified in our tests. There’s however no local dimming - a feature present in Panasonic’s higher-end models that improves contrast by adjusting the backlight in dark parts of a scene. Panasonic claims that the TH-49EX600D can achieve a peak brightness level of 550 nits, which is pretty good for a mid-range HDR-capable TV. However, audio is handled by two underpowered 10W speakers.

The TV remote has a classic design which is comfortable to use from the get go. There’s a dedicated Netflix button, which is always useful if you’re subscribed to the service. If not, well, it’s another button you’ll rarely use. Unlike a lot of smart TVs these days, there’s no option for voice input, so you’ll have to type everything manually. We're also surprised that this TV doesn’t support Bluetooth, so there’s no way to use a wireless keyboard either.

The Panasonic SC-UA7 speaker’s remote has a similar design, and though it supports a good number of connectivity options, you can’t connect it to the TV wirelessly since… you guessed it, no Bluetooth. This limits your options for positioning the speaker relative to the TV, and of course means you have to deal with another tether.

Right off the bat, we noticed the backlight leaking from all four corners of the display, along with edge shadows across the screen. These issues are commonly seen on a lot of LCD and even LED panels, but here it was much worse than what we’ve encountered before. We weren’t expecting this from a TV that’s relatively priced at such a premium. Though this might not affect TV viewing during the day, you will see deep blacks looking grey when watching TV in a dark room. The edge vignette effect is unfortunately visible under all viewing conditions, and if you have an eye for details, it could get bothersome really fast. This doesn't look like a good start for the Panasonic TH-49EX600D,

Netflix 4K streams looked pretty decent, but the HDR implementation left a bit to be desired. The TH-49EX600D couldn’t handle colour balances well in brighter scenes, which resulted in a bit of discolouration and even greying to an extent. We streamed a variety of shows including Stranger Things (4K, HDR), Haters Back Off (4K, HDR), Star Trek Discovery (Full-HD, HDR), and more. We then switched to a a brilliantly mastered 4K Blu-Ray disc, BBC’s Planet Earth II, and found that this issue was still prevalent. It might not be noticeable to everyone right away, but it becomes very obvious every now and then. Colours aside, the brightness is pretty well managed.

There's a silver lining once you attach a gaming console to the panel. We connected both a PS4 Pro and an Xbox One S to the TV and tried out a whole lot of games, both HDR and non-HDR. The TV didn’t disappoint us at all. HDR in gaming looked great across the board, with deep colours and great differences between dark and bright levels. Uncharted 4 is a great-looking game regardless of the TV you play it on, but with the TH-49EX600D it was a demonstration of excellent HDR. When the game aimed a bright light towards us, we almost had to squint. Even Knack II showed a consistently rich colour palette. Gaming is usually the best showcase for HDR TVs, and Panasonic makes the most of it. But the same isn’t true for movies and TV.

Also, the TH-49EX600D’s size, relative to its resolution, works to its advantage when it comes to upscaling. Cable TV  at 1080i looked sharp and crisp, and so did older Blu-Ray content and non-HDR 720p and 1080p videos. We even tried an older DVD movie, and though the quality was not ideal, the TV did hold its own. If you do watch a lot of cable TV and have a library of content in older formats, this TV will do just fine, in terms of upscaling.

Audio is where the TH-49EX600D really suffers. The 10W speakers are too tiny to fill most room spaces, and fall well short of delivering an acceptable experience. The sound is nothing but flat, and the TV’s Bass Boost and Virtual Surround options do little to improve that. We usually recommend that you buy an external sound system for most flatscreen TVs, but with this one, it’s a necessity. Panasonic must see this too, which is why there’s the bundled home speaker.

The UA7 Speaker itself has some great connectivity options and is feature-rich, but that’s just specs. Its audio performance also left a lot to be desired. Because of its design and the lack of wireless connectivity, placement becomes awkward. Audio from a single direction is also quite unsuitable for watching movies, even if you place the unit right below the TV and centred to it. We had to use an optical audio cable for our tests, and despite this and our sources, the sound signature was uneven, with stronger highs and weak bass from the sub-woofer. There was a distinct lack of depth in the overall audio. You would be better off buying a budget soundbar with an external sub-woofer instead.

The Panasonic TH-49EX600D seems a bit out of place in the market right now. Its thick body, plus all the issues with backlight leakage, dirty edges and poor audio just don’t belong in 2017, when competitiors are doing phenomenal work with their premium TVs. The TH-49EX600D does have some pretty compelling specs on paper, and it does deliver when it comes to upscaling and gaming performance, but HDR video is just average at best. The bundled speaker is a mismatch as well. With all of this considered, the price is a huge deterrent, especially for a 49-inch model. If you're looking for a premium, future-ready LCD TV, we suggest you look at what Sony, LG and Samsung are currently offering.