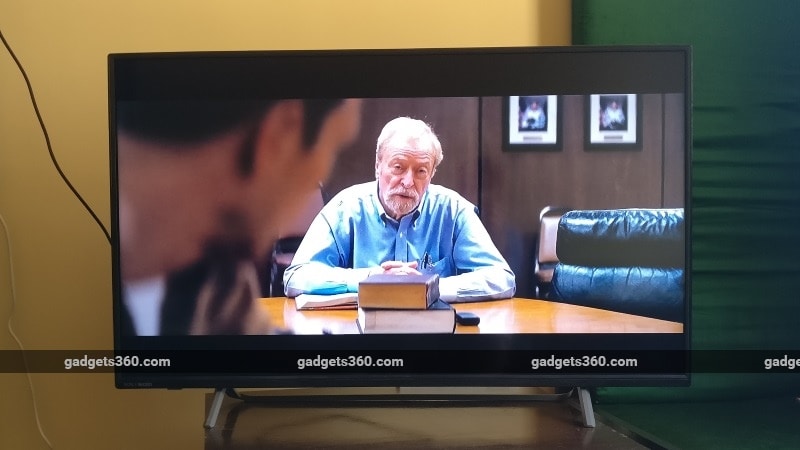 Not much is known about Noble Skiodo, except that it's a joint venture between Indian manufacturing specialist Noble and American design firm Skiodo. The company has quietly launched a number of televisions and washing machines in India, with the TVs available on Amazon India. The focus of the range is on affordability, with big features at prices that are incredibly competitive.

Today, we're reviewing one of the most interesting models, the 42-inch 4K Smart LED TV. Priced at an extremely reasonable Rs. 32,990, this is one of the most affordable 4K TVs available today. It's also Internet-enabled, which means that you have access to online content as well. How does this affordable 4K TV perform? We go into the details on the Noble Skiodo 42-inch 4K Smart LED TV in our review.

Noble Skiodo 42-inch 4K Smart LED TV design
It isn't often that we see brilliant design on an affordable product, and the Noble Skiodo 42-inch 4K LED TV isn't about to change that trend. It is utterly ordinary in every way, with a black plastic frame, a tolerable amount of border bezel all around the screen, and a shape that isn't slim, but isn't unbearably thick either. The bottom left corner of the TV has a Noble Skiodo badge.

The left side of the TV has the physical controls, including power, volume, channel scrolling, and more. At the back on the left side is one set of inputs including the component sockets and three of the USB ports. Facing downwards are the remaining ports: one VGA, three HDMI, and the last USB port, among others.

It's worth noting that the space around the bottom ports is inadequate, which means that you may have some trouble plugging cables and dongles in here. We weren't able to fit our Google Chromecast without an adapter because of a lack of space. Although using an HDMI/ USB extender will solve this issue, the lack of foresight in design is frustrating.

The TV can be wall-mounted or placed on a counter-top using its stand. The single-piece stand is basic and fairly easy to attach, and the small size of the TV itself means that the stand is also small and will fit on relatively narrow TV tables. It has a unique shape and style, but is sturdy and stable nonetheless.

The Noble Skiodo 4K LED TV comes with two remotes: a regular unit and a Bluetooth-powered wand with a full keyboard on it. The ordinary remote is large and bulky, and feels cheap, but has all the controls and options you would need on a remote. The second one also feels a bit tacky and poorly-built, but can be used to navigate around the interface like a mouse, or to type quickly and easily. It needs a dongle that plugs into one of the USB ports in order to be used, as the TV itself is not Bluetooth-enabled. It's a bit too large, and isn't very easy to use thanks to its poorly laid out buttons. However, it's useful when using the TV's browser and smart apps.

Noble Skiodo 42-inch 4K Smart LED TV specifications and software
The Noble Skiodo TV has a 42-inch 4K-resolution screen, and has a UI based on Android 4.3. Internet connectivity is either through Wi-Fi or an Ethernet cable connecting into the back of the TV. This isn't an HDR TV like the Sony 55X9300D or Samsung 65KS9000, so there isn't anything fancy on board, which is understandable at this price point.

There is a 1.5GHz ARM Cortex A9 processor powering the TV, along with 4GB of internal storage. The interface recognises the Noble Skiodo as a tablet rather a TV, and the resulting lack of optimisation of the interface can be a bit frustrating at times.

We found the Android-based TV interface a bit too simple and unrefined. It's poorly designed and laid out, and bears very little resemblance to Android. The home screen gives you quick access to sources and the media player for content on a USB drive, along with a calendar and a couple of other options. There is an APK installer, which lets you sideload apps onto the TV, and there is also a third-party marketplace called 1Mobile which gives access to an assortment of apps to install on the TV, though you can't be certain which ones will actually work.

Strangely and disappointingly, not all apps work on the Noble Skiodo TV. Notable apps that we could not get to run were Netflix and YouTube, the latter because of a lack of Google Play Services on the TV and the fact that trying to install caused the TV to crash. We also tested Hotstar, which did work. On the whole, the software has far too many loose ends, and the functionality is too unrefined to be actually called "smart". If you're reliant on apps and other smart TV functionality, the Noble Skiodo isn't the best option for you.

Starting with the highest resolution, we played our 4K demos on the Noble Skiodo TV. Although colours come off as a bit exaggerated, the picture is definitely sharp thanks to the sheer density of all of those pixels. At normal viewing distances, you won't see any flaws in good 4K content. We did notice occasional playback errors such as lag and stutter, which indicates minor flaws in the video processing abilities of the TV.

The effect of good 4K content is best experienced on large screens, where the sharpness in the picture is visible over a larger surface. At 42 inches, the sharpness can definitely be perceived, but there's very little actual advantage at play. On the whole, the Noble Skiodo TV does perform well with 4K content, with the only issue being that colours come off looking a bit unnatural, unlike what we saw with the excellent (and several-times-more-expensive) Samsung 65KS9000.

With full-HD content, the flaws of the TV started to show. Its upscaling capabilities are poor, and fitting 1080p content onto the 4K screen is a bit of a struggle. We saw flaws in the motion, and some stutter. Contrast also suffered to some extent, and the picture looked very artificial and grainy as a result.

Moving on to standard definition content, the issues with upscaling were even more pronounced. Colours were far too unnatural, with skin tones taking on an orange hue and appearing entirely unconvincing. Light and dark sections of frames don't interplay very well, and this usually resulted in bright zones looking too bright and dark zones having no detail whatsoever. Additionally, artefacts were visible everywhere, thanks to the TV's inability to properly fit low-resolution content onto the high-resolution screen.

The Noble Skiodo TV also has some issues with sound, with the speaker producing tinny audio that can't quite keep up with frequencies on either end of the range. The sound tended to crack a bit, and lacked definition. However, the TV is loud, and if you're willing to accept some of the issues with the sound, you won't need a separate sound bar.

Verdict
The Noble Skiodo 42-inch 4K Smart LED TV may well be one of the most affordable 4K TVs available today, but that doesn't mean it's good. Having the ability to display 4K content means very little if the TV can't live up to expectations with more common resolutions. If you are already watching 4K content or intend to do so, the Noble Skiodo TV may be worth considering. However, if your viewing is predominantly standard- and high-definition content, there may be better options available, such as the larger InFocus 50EA800.

Nonetheless, the Noble Skiodo is incredibly affordable, and many people who aren't too finicky about picture quality might be happy with this TV. The smart functionality, although crude, is still better than having none at all, and as such the TV is a value proposition regardless of its flaws. This model is available via Amazon India at Rs. 32,990.