LG’s Tone Bluetooth headsets have been quite popular over the years, and with every new iteration, we’ve seen a slight refinement. The company announced its latest version called the Tone Active+, during IFA 2016 and it is now available in India at an MRP of Rs. 12,000.

The Tone Active+ boasts of external stereo speakers, fitness monitoring, and dual microphones as its highlight features. It’s time to put them to the test.

The LG Tone Active+, which bears model number HBS-A100, continues to use the same neckband design with retractable earbuds, which is still convenient for travelling. The device is supposed to be available in black or silver, but our unit was blue even though the box said black. The entire neckband is built from plastic, and the fit and finish around the joints is good. The buttons and switches also feel solid.

The rear portion of the LG Tone Active+ uses a heavy rubber lining so it flexes easily when put it on or take it off your neck. The headset is very comfortable to wear thanks to the horseshoe design and low weight of just 60 grams.

There’s a speaker placed on either side of the unit, and they face upwards, towards your ears. You can toggle between the earbuds and the speakers with a little switch placed on the outer surface of the neckband, on the right. The power switch is placed on the inside of the neckband along with an LED light on the left hand side. There are also dedicated buttons on the left for adjusting the volume and answering an incoming call, while on the right, you’ll find controls for fast forward/ rewind and a play/ pause button. We appreciate the addition of separate buttons for each function, rather than clubbing all the functionality into a few buttons. 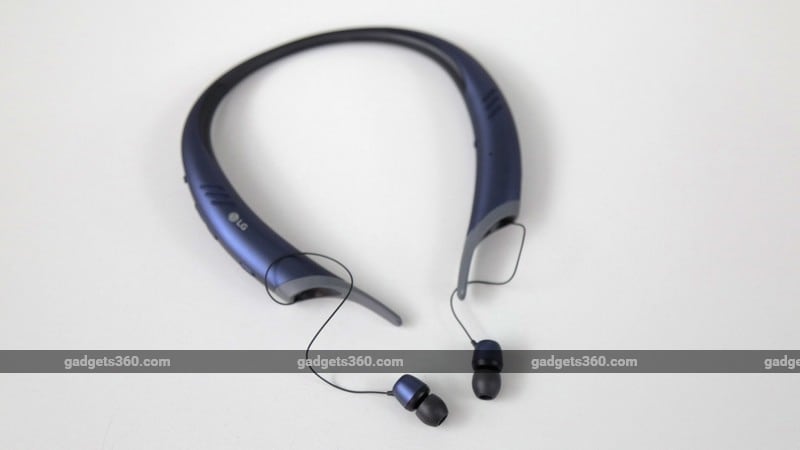 In order to use the earbuds, you simply pull them out to the desired length, after which they lock in place. The wires they are attached to look quite frail but after using the headset, we can say that they are pretty durable. In the box, LG ships additional gel ear tips in different sizes, a large stabiliser (the rubber bit that extends from the tip of the neckband), and a Micro-USB cable for charging.

In terms of specifications, the Tone Active+ supports Bluetooth 4.2 as well as Qualcomm’s aptX and aptX HD profiles for high-resolution audio (up to 24-bit) playback. The device is also IPx4 certified so it can withstand sweat and light splashes of water. The drivers in the earbuds feature what LG calls Quad-Layer Speaker Technology, which was introduced in the Tone series a couple of years ago. There are also two MEMS microphones on the top and side of the neckband, near the ‘call answer’ button.

The functionality of the Tone Active+ can be expanded after installing the Tone & Talk app on an Android device. All the buttons on the neckband serve dual purposes, and symbols for those functions are inscribed on them. When there’s no media playing, you can check the battery status, toggle the vibration function on or off, record a voice memo, or play your previous messages. The app also lets you enable vibration alerts for incoming calls and notifications from any installed app. You can also enable voice notifications, which reads out the sender's name and the app that has generated the notifications. The voice prompt can also read out the contents of text messages for you. We found this to be a very handy feature for when our hands were occupied.

If you're using an iPhone, you don't get the voice assistant features. You'll find the Tone & Talk app in the iOS App Store but its functionality is limited. Instead of a voice memo shortcut, pressing that button just reads out the current time. For activity tracking, LG recommends the Tone & Health app, which lets you set goals, monitors your progress, and syncs with Apple's HealthKit. 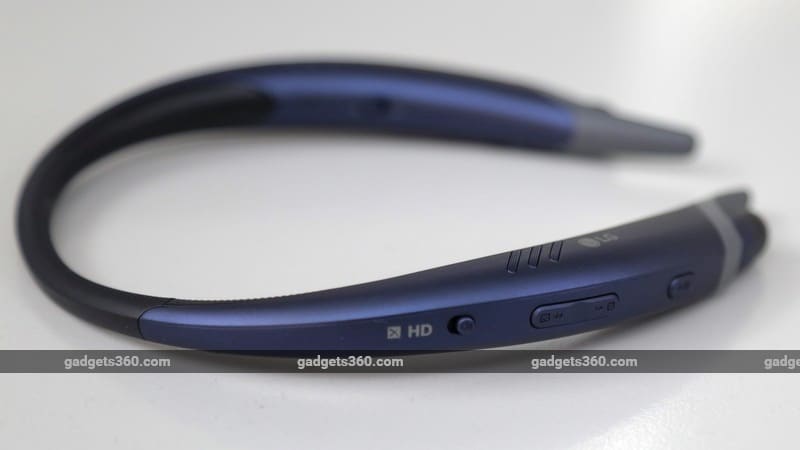 Like we mentioned earlier, apart from the earbuds, the LG Tone+ also has stereo speakers built into the band. Unfortunately, these aren't great for media playback as sound is barely audible when you’re outdoors with lots of ambient noise. They're usable indoors in a quiet room, but the sound quality is still pretty weak. Things are a little better when making phone calls. The MEMS microphones do a good job at picking up your voice, and even when we commuting by public transport, the caller had no trouble understanding us.

The LG Tone Active+ has a built-in step counter, which you can trigger by holding down the ‘Next’ and ‘Previous’ buttons simultaneously for a few seconds. The Tone & Talk app can record your activity, or you can use the LG Health app to track your steps and calories burnt. However, we didn’t find this to be very accurate. Any movement of the headset is recorded as a step, even if you aren’t walking.

The earphones are incredibly comfortable to wear, even for long durations. The gel ear tips fitted snugly into our ear canals and blocked most ambient noise. There was no sound leakage either, even when we turned up the volume, which is good news. Initially, we found the controls a bit awkward to reach. Once you wear the neckband, they are a bit too far back. 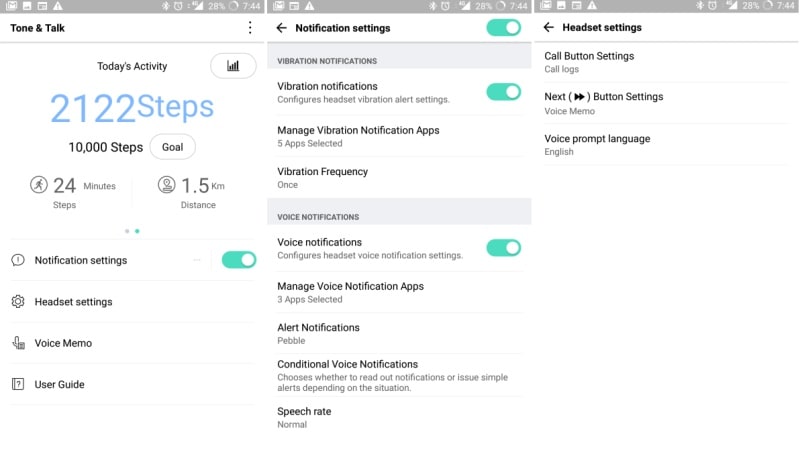 We tested the Tone Active+ with a variety of devices, but primarily used a OnePlus 5 to check sound quality as it supports the aptX HD audio profile. The headset automatically enters pairing mode once your switch it on, making the process very simple. We started with 24-bit FLAC versiosn of Michael Jackson’s Who Is It, Bruno Mars’ That’s What I Like, and Leonard Cohen’s If I Didn’t Have Your Love.

In Who Is It, the Tone Active+ delivered tight and punchy bass with great clarity in Jackson’s voice. There was also very good separation in the vocals of the backup singers in the chorus. The dynamics in Bruno Mars’ single were handled beautifully, with good separation across instruments and the right amount of emphasis given to frequencies across the range. The highs were sharp and crisp without sounding piercing. Cohen’s raspy voice was also reproduced with great aplomb. You can really push the volume level much higher than what your smartphone would ordinarily deliver. However, these earphones don't sound too open. We did feel somewhat fatigued after prolonged listening sessions.

The Tone Active+ does a good job even with regular quality tracks, which we streamed using Apple Music. We also played the FLAC files using the standard SBC codec, and while they still sounded good, there was a noticeable shift in quality and dynamics. The sound isn’t too coloured which is good, since high-quality audio files have the chance to shine.

Battery life was good. We managed to get around nine hours per charge on average, which is still less than the rated 12 hours. Using the speakers rather than the earphones drained the battery in roughly five hours. Charging is fairly quick if you use any ordinary smartphone charger. 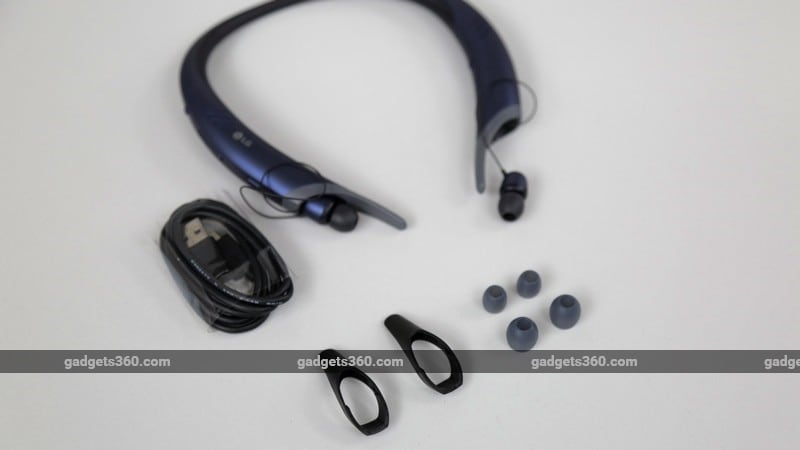 The LG Tone Active+ is a very good Bluetooth headset if you have the budget for it. The street price is actually a little under Rs. 10,000, which makes it decent value considering the quality of audio that you get and its support for high-resolution audio. The design is comfortable, and we liked the fact that the neckband is sweat-resistant. On the other hand, the speakers and the built-in step counter feel gimmicky, and you don't get the full range of functionality with an iPhone.

Further reading: LG Tone Active, LG, Tone Active, Bluetooth headsets, aptX HD, HBS-A100
Roydon Cerejo Email Roydon
Roydon Cerejo writes about smartphones and laptops for Gadgets 360, out of Mumbai. He is the Deputy Editor (Reviews) at Gadgets 360. He has frequently written about the smartphone and PC industry and also has an interest in photography. With over a decade of experience covering the consumer technology space, he is also an avid sci-fi movie and TV show geek and is always up for good horror flick. Roydon is available at roydon@gadgets360.com, so please send in your leads and tips. More
iPhone 8 White Variant Rendered; KGI Analyst Says No In-Screen Fingerprint Sensor
BSNL and Airtel Free Data Offers, Moto E4 Price, Lenovo Vibe K5 Note Sale, and More: Your 360 Daily

product The LG Tone Active+ Bluetooth headset does a good job with high resolution audio files and has a comfortable design to boot. 4 out of 5 stars