The smart speaker race is heating up in India. Last year, Amazon launched its Echo lineup of smart speakers in the country with prices starting at Rs 3,499. Now, the Google Home and its smaller cousin, the Google Home Mini, have finally arrived in the country. The Google Home is a nifty little speaker that harnesses the power of the Google Assistant to play music, respond to all sorts of questions, stream movies and TV shows across to televisions, control smart home devices, and even tell jokes in a pinch. Let's see what Google's smart speaker brings to the table.

The Google Home has a very minimalist, clean, and inconspicuous appearance. The top half is made of plastic while the bottom is a removable mesh panel covered in fabric. The device is only available in white but the bottom panel can be swapped out to add a splash of personality.

The cylindrical design is admittedly a bit odd and quirky - most of our friends mistook this device for a fancy air freshener or a lamp. That said, it looks quite premium and is very compact. The Amazon Echo looks cold and utilitarian in comparison.

The build quality is quite decent although the use of plastic at this price does feel a bit cut-rate. While the Google Home Mini can be powered by a power bank thanks to its Micro-USB port, the regular Google Home is meant to be stationary, and uses a proprietary mains power adapter that plugs in at the bottom.

The top of the Google Home slopes at an angle and hides a touch-sensitive panel that can be used to play/ pause music and adjust the volume. The slanted top also has LEDs that light up like the colourful Google dots. There is only one physical button at the back which disables the microphones in case you're worried about privacy.

The setup process is extremely simple. Provided you have a reliable Wi-Fi connection at your home or office, the Google Home app will recognise the device in a jiffy after running through a few simple steps. Three far-field microphones help the Google Home pick up voices from across a room.

The Google Home is basically a meteorologist, DJ, game show host, encyclopaedia, and work planner all rolled into one. You can ask it about random facts, the weather, directions to a specific destination, the best Chinese restaurants around you, and so on. You can also ask it to set reminders and alarms, and even create shopping lists.

The Google Home harnesses Google Assistant to fetch these results and is able to perform basic tasks like these without a hitch. That said, it is easier and more productive to do most of these things on your smartphone the old-fashioned way - by hand. For instance, asking Google Home for the best Chinese restaurants or movies playing around you presents a truncated list which cannot be expanded. While such scaled-down results are fine in a pinch, we found it easier and quite a bit more productive to open BookMyShow or Zomato on a smartphone.

That said, there are three use cases in which the Google Home excels – getting recipes, listening to the news, and playing music on request. Ask the Google Home for a particular recipe and it gives step-by-step directions. After soiling our smartphone screens for years in the kitchen, we found it incredibly convenient to have the Home simply read recipes aloud. You can ask the Google Home to give you a list of ingredients, ask it to repeat steps you missed, and find a simpler recipe if the one you are trying is just too hard. It even worked for local dishes such as Rajma Chawal and Butter Chicken, but sometimes the measurements for ingredients were in ounces, which most Indians will not be familiar with. 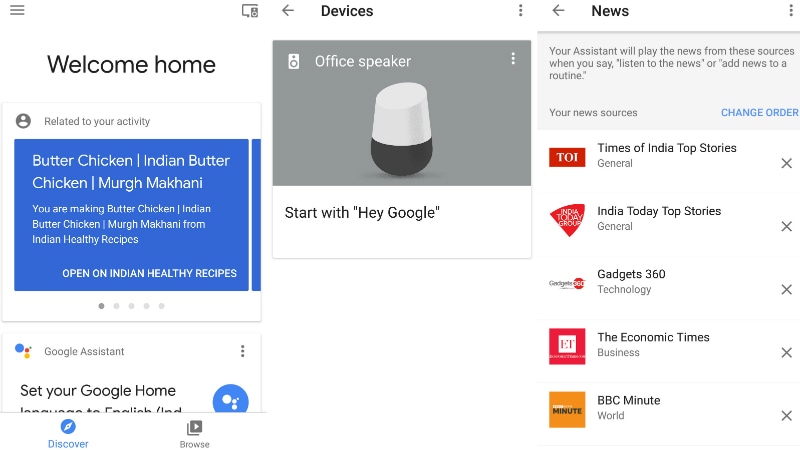 Having Google Home read the top news stories of the day aloud in the morning is also extremely convenient. You can customise news sources via the Google Home app but we're limited to international sources such as Forbes, BBC, and Al-Jazeera at the moment. The Google Home can also play songs on request from Google Play Music, Gaana, and Saavn. It does a good job at recognising the names of Indian songs and artists, and can also play personal playlists if you have a paid account for any of the aforementioned services.

Your queries are logged in the Google Home app as well, which is very handy. When you ask Google Home for directions, it opens them in Google Maps in the app. Similarly, search results and certain answers are displayed in the app as well. This works a bit inconsistently though - some queries are not displayed while others are. If there is no pattern to this, we couldn't really figure it out.

The Google Home understands contextual questions as well. Asking the smart speaker “Who is their coach” after quizzing it on who won the English Premier League last year yields the name of the same team's coach. You can even take this a step further and ask “How tall is he” and “Where is he from”, and Google Home understands that you're referring to the same person and responds accordingly. Amazon's Alexa and Apple's Siri lack such contextual understanding of text flow.

The Google Home can act as a game show host as well. At the moment, there are two multi-player games built-in - Lucky Trivia and Crystal Ball -  with more promised for the future. The games are a nice way to impress people and kill time with friends. 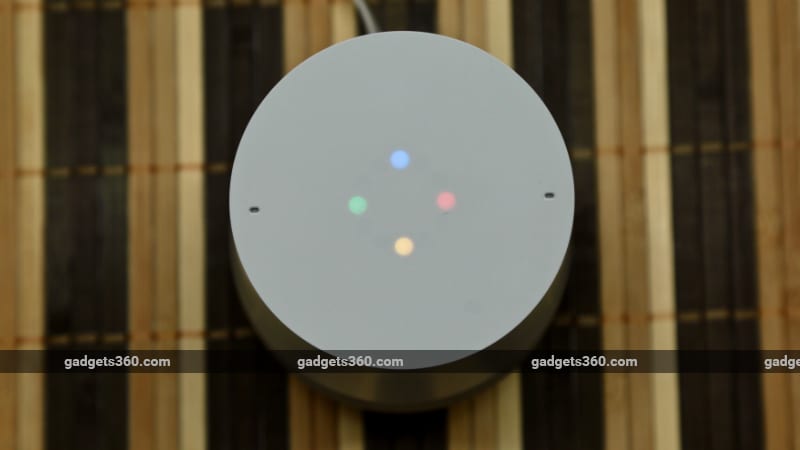 In our experience, the Google Home understood Indian accents very well and did not trip over complex names of Indian artists and albums such as ‘Harris Jayaraj' and ‘OK Kanmani'. Hindi language support is coming later this year which should further enhance the appeal of the smart speaker.

You can club multiple actions together into “routines”. Say “Ok Google, I am home”, and the Google Home can turn on the lights, and play some relaxing tunes via Play Music.

While all this sounds extremely nifty and futuristic, the Google Home's functionality is a bit limited in India as of now. Unlike the Amazon Echo, the Home cannot be used to book cabs or make hotel and flight reservations. It lacks a lot of local content at the moment. Add to that the nascent stage of smart home technology in India, and the smart speaker loses some of its sheen.

The Philips Hue ecosystem is one of the few smart home products supported by the Google Home at the moment. Sync the Home and the Philips Hue lights successfully, and you will be able to turn them on and off, dim them, and even change their colour using voice commands.

How does the Google Home fare as a speaker? In a nutshell: average. The Google Home is surprisingly loud for its size. It is more than capable of filling a moderately sized room with sound thanks to the 360-degree speakers that fire in all directions. That said, the actual sound quality is nothing to write home about.

The Google Home has a 2-inch driver and dual 2-inch passive radiators. In our experience, it distorted at high volume and vocals in particular sounded muffled. The mids were repressed and got lost in the sound mix, and the highs lacked sparkle and clarity. To give credit where it is due, the dual 2-inch passive radiators deliver a considerable amount of bass, which makes the Google Home well suited for predominantly bass-heavy genres such as EDM, R&B, and Hip-Hop.

We actually preferred using the Google Home as a Bluetooth speaker, because casting music via W-Fi is quite arduous. While the music quality is superior, casting is slow and quite buggy - there is a perceptible lag between hitting play and the music starting to play. 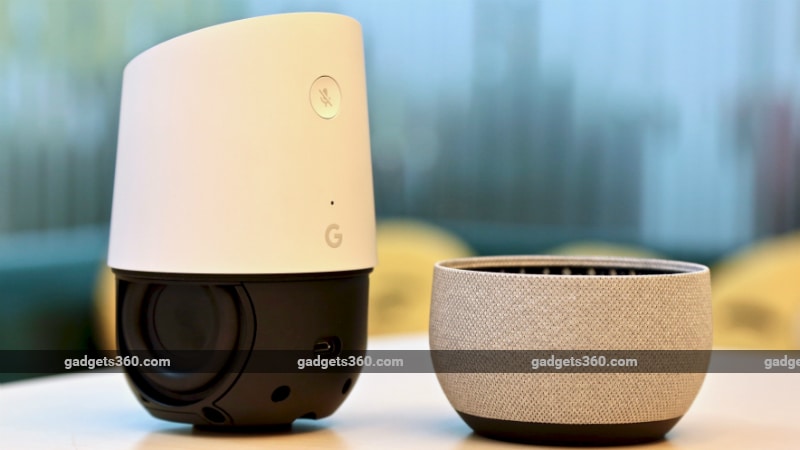 The Google Home can also be connected to any Bluetooth-enabled speaker - a great way to enhance its rather limited audio capabilities. We hooked it up to a Bose Solo 5 soundbar without any issues whatsoever.

After the initial excitement died down, we found ourselves using the Google Home for three things in particular - listening to relaxing tunes at night via Google Play Music, setting up timers, and listening to the news.

That is the biggest issue with smart speakers in general, and especially in India where smart home products aren't widely available. The Google Home also lacks certain basic capabilities at the moment. The first few days of ownership are a blur of excitement and experimentation, after which the speaker is only used for a few, specific things. We can imagine the Google Home being useful for playing music on request, taking reminders, in the kitchen, or for someone who has a lot of smart home devices.

There are also the privacy implications of having a device that is ‘always listening' in your house - even though Google says that nothing is sent to their servers till the ‘Ok Google' trigger word is said. The Google Home is also intrinsically linked to your Google account which might also deter some people already apprehensive of the amount of information Google is collecting.

Verdict
There simply isn't a practical and pragmatic reason at the moment to buy the Google Home over similarly priced Bluetooth speakers such as the JBL Charge 2+ which offer better sound quality. Almost everything a smart speaker does can be done manually.

However, the Google Home is a great futuristic alternative to a vanilla Bluetooth speaker that could make your life a little more convenient - at the expense of sound quality. While most of the Google Home functions can be achieved by the Google Assistant on a smartphone, a large part of the appeal of the Google Home lies in the fact that it lacks a screen. It somehow just feels much more natural to ask someone - albeit a machine - for the weather or a recipe. Not only does it feel less mechanical, it also takes you away from the multitude of distractions offered by a smartphone.

Is the Google Home a game changer? No, not yet at least. However it is a nifty gadget that has a lot of potential waiting to be tapped. Buyers considering it should also take a look at the Google Home Mini, which can be connected to any Bluetooth speaker and leaves a much smaller dent in your pocket.

product The Google Home is a smart speaker that harnesses Google Assistant to play music, set reminders, answer questions and more. Here is our full review. 3.5 out of 5 stars