Creative is a familiar name when it comes to speakers and headphones. In its early days, it was the go-to brand for PC audio components, and today it sells a diverse range of consumer audio peripherals. Its Muvo series of portable Bluetooth speakers has generally been targeted at young people and those with active lifestyles, which is reflected in the products' bright colours and snazzy designs.

We’ve reviewed a few of them in the past, including the Muvo 10, Muvo 20, and Muvo Mini. Today, we’ll be testing one of the company's recent launches in India, the Muvo 2c. This pocket-sized speaker boasts of a water-resistant body and some interesting usage modes. With a sticker price of Rs 4,999, let’s see if it's worth recommending.

The Muvo 2c ships in a clear acrylic box so you can see it from all sides. Inside, you get the speaker itself, a Micro-USB cable for charging and PC connectivity, a quick start guide, and warranty leaflets. The speaker is available in a range of bright colours internationally, but only the red, blue and black options are being sold in India. It easily fits in the palm of your hand so carrying it around isn’t a problem, and it’s fairly light at just 159g. The speaker has a plastic body with a rubberised coating, which gives it some grip. There’s a metal mesh covering the speaker in the front but no protection for the passive radiator at the back. This could be prone to damage if you’re not careful when transporting the speaker around.

The two rubber strips on the bottom offer good stabilisation, as even with bass-heavy tracks at full volume, the speaker doesn’t move about. There’s a rubber flap on the side which protects the 3.5mm aux input, microSD card slot, and Micro-USB port. However, the rubber flap is a bit to soft so re-sealing it takes a bit of effort.

The Muvo 2c has a series of five hexagonal buttons on the top, along with a microphone and two LED indicators. The first button powers the speaker on or off, and the Bluetooth button is used for pairing and Play/ Pause functions. The third button, labeled M for mode, lets you switch sources between Bluetooth, aux in, microSD, and USB. The colour of the right-hand side LED light tells you which mode you’re in. You get a voice prompt only when you are ready to pair the speaker with a device but for everything else, you have to know what the colour of the LED means. The first LED on the left lights up red when the device is charging.

The Muvo 2c can handle a bit of dust and light splashes of water thanks to the IP66 certification, but it isn’t designed to be submerged under water. You can connect a second Muvo 2c speaker to it and use them in a stereo configuration. It also doubles up as a standalone MP3 player if you use a microSD card. The speaker supports cards of up to 128GB in capacity, and file formats including FLAC, MP3, WAV, and WMA. You also use the Sound Blaster Connect app for Android and iOS to browse through songs on a microSD card and switch sources remotely.

Creative doesn’t specify the size of the driver or supported frequency range, other than the fact that it's a single full-range audio driver. It only supports the SBC Bluetooth audio codec but you can also answer calls using the built-in microphone. 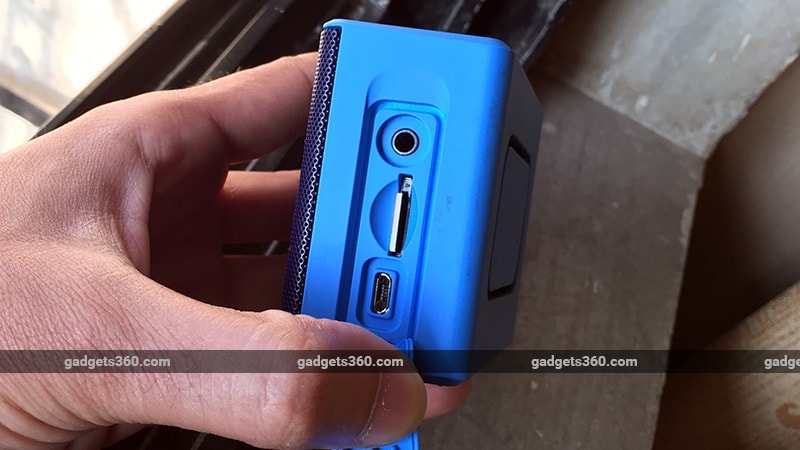 There’s no NFC to aid in the pairing process, but doing it manually is quite painless. You can pair the speaker with multiple devices but you can only actively use one of them at a time. In order to play music from another source, you’ll have to first disconnect the one that’s currently playing.

The Sound Blaster Control Panel app works better, and we tried it on a Mac. Here, you can switch between different audio profiles (Music, Movies, and Gaming) and customise each one with an equaliser preset, or adjust audio characteristics like boosting dialogues, etc. The firmware of the Muvo 2c can also be upgraded using this software. However, you don't need the software to use the speaker with a Mac or PC, as simply plugging it into a USB port does the trick. 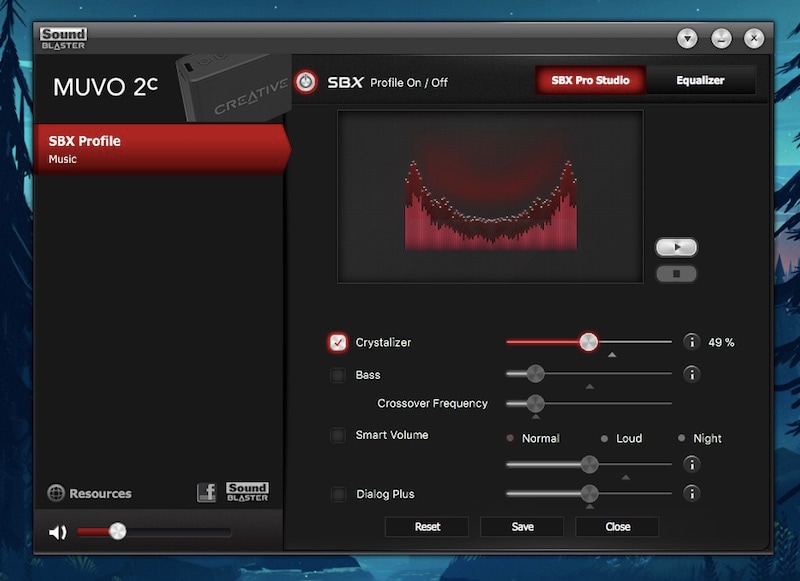 We dumped a bunch of audio test files onto a 32GB microSD card and the speaker had no trouble playing them. To skip or go to a previous track, you can use the Mode button along with the volume up or down buttons. The files are played in sequence, even if they are in different folders.

As a speakerphone, the Muvo 2c does an okay job, but it's not great. We found ourselves having to go really close to the speaker in order for the caller to hear us clearly.

For a single-driver speaker of this size, the Muvo 2c gets really loud. Unfortunately, it feels strained once you push the volume beyond 85 percent. Here, the bass from the passive radiator also begins to diminish and the vocals and highs tend to overpower them. At moderate volumes, the speaker is able to deliver a decently wide soundstage with a fairly open and detailed mid-range. In Hotel California by The Eagles, the subtle thump of the bass drum is audible thanks to the passive radiator, and the cymbals have good separation from the other instruments.

The Muvo 2c struggles a bit with heavy bass tracks such as Starboy by The Weeknd at high volume levels, and isn't very punchy at lower volumes either. We also noticed an intermittent glitch when using it with iOS devices, where the volume sync between the speaker and the phone would randomly break. This meant that changing the volume level on the phone would have no effect on the speaker’s volume. The only way to fix this would be to turn Bluetooth off and then on again on our iPhone.

Creative promises up to six hours of life with the built-in 650mAh battery, but we got much less than that when we tested the Muvo 2c. With the volume set to about 70 percent, we managed get only 3 hours and 32 minutes of continuous music playback, which isn’t great. With such a low battery capacity, there's only so much you can hope for. You don’t get any audio cues about the battery level either, just a blinking red LED. You can check the battery level by double-pressing the Mode button, which makes the right LED change from green to yellow, purple or red, depending on the level.

Verdict
The Creative Muvo 2c is nice-looking little Bluetooth speaker which packs in quite a bit of functionality for its size. We love its design (although some protection for the radiator would have been preferred), and the fact that it can be used as a compact standalone music player. The IP66 rating and the ability to use it as a USB audio device are also very nice bonuses. However, the single audio driver and passive radiator fall a bit short in delivering good bass and soundstaging. If what you're after is great audio quality, the UE Wonderboom is a better pick for just a little more money. At its current price, the Muvo 2c feels a little too expensive as well.

Creative has an alternative called the Muvo 1c priced at Rs. 3,499 which is similar to the 2c in terms of dimensions and driver specifications, but that it lacks the microSD card slot and USB audio support, and is only available in one colour in India.

If you don't mind compromising on battery life, the Muvo 2c is decent-sounding and versatile Bluetooth speaker.