A company known for making neutral-sounding in-ear monitors (IEMs), Brainwavz is, for the first time ever, foraying into making Bluetooth earphones. It makes perfect sense for Brainwavz to bring its expertise to the wireless audio space because the demand for such peripherals is on the rise. People want to be rid of wires.

With the Blu-100, Brainwavz promises a full-bodied sound with punchy bass and that too at a bargain. Let's find out if the attempt impresses us.

Design, fit and specifications
The Blu-100 looks like a thin flat cable (which goes behind your neck) with earbuds on each end and an inline microphone/remote in between. This strip of wire is almost weightless but the earbuds have some heft because they are made of metal. The Blu-100 is available only in black, and like most Brainwavz products, has a utilitarian design. If you are looking for something flashy, look elsewhere.

The earbuds fit perfectly in our ears, especially with the Comply Foam 400 tips that Brainwavz bundles with the Blu-100. Also included are three silicone tips of varying sizes. It is vital that you pick the right size for your ears because if the fit is not right you won't get the optimum bass response. In the box, you also get a hard case and a Micro-USB cable for charging. 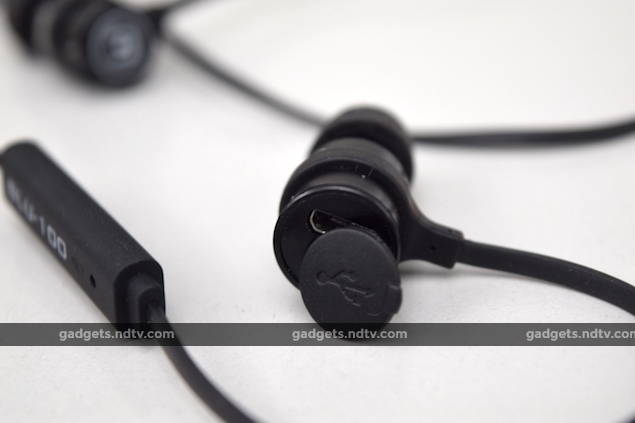 The Micro-USB charging port is covered by a rubber flap on the rear of the right earbud. The remote has three dots for the play/pause, next/forward and previous/rewind buttons. These buttons have decent tactile feedback and are easy to locate as well. On the underside of the remote control is a really tiny white LED light, which is difficult to locate, but Brainwavz confirmed that this problem is being fixed in retail units. The in-line microphone can be used to make and receive calls.

The Blu-100 uses two 8mm dynamic drivers and has an impedance of 30 Ohms, which is around the sweet spot for most portable devices. It operates in the frequency range of 20-20,000Hz. Sound is receivedover Bluetooth 4.0 and there is support for the apt-X codec as well. The Blu-100 can pair with two devices at once.

Performance
Pairinga source device to the Blu-100 is a fairly simple process and once the connection is established the device remembers it for future connections. The Blu-100 gets really loud for a Bluetooth headset, which helps with passive noise cancellation. The stereo separation and soundstaging are both decent but nothing extraordinary.

The Blu-100 has a sound signature that is common to most Brainwavz IEMs. In fact, if these earphones were attached to a wire and marketed as the Brainwavz S0 no one would be able to tell the difference. The sound is laid-back, neutral, and generally great for listening to music for long periods of time because it does not induce fatigue. Contrary to what Brainwavz claims, the bass is far from punchy. In fact, the low frequency sounds are subdued in comparison to the earphones' superior performance in the mid-range.

We used an iPhone 6 (Review | Pictures) over regular Bluetooth 4.0, and an HTC One (M8) (Review | Pictures) which streams audio using the aptX codec. Two of our test tracks were Bittersweet Symphony by The Verve and Avicii's Wake Me Up. Unsurprisingly, the Blu-100 had more spunk when we used it with the HTC One (M8) thanks to the aptX support. The highs started sounding a little more bright and the clarity improved by a great margin. Your listening experience will definitely be enhanced if you have an aptX-enabled device. That's not to say the Blu-100 didn't sound great on the iPhone; it is just a different sound. If you are going to be watching videos, the Blu-100 is also pretty good thanks to its really good mid-range response.

Brainwavz claims that the Blu-100 can last 4.5 hours on a single charge and it takes two hours to charge the 60mAh battery fully. In our time with the earphones we only managed around 3 hours of playback before the battery completely ran out of juice. The microphone was decent for calls and we faced no connection drops during testing. 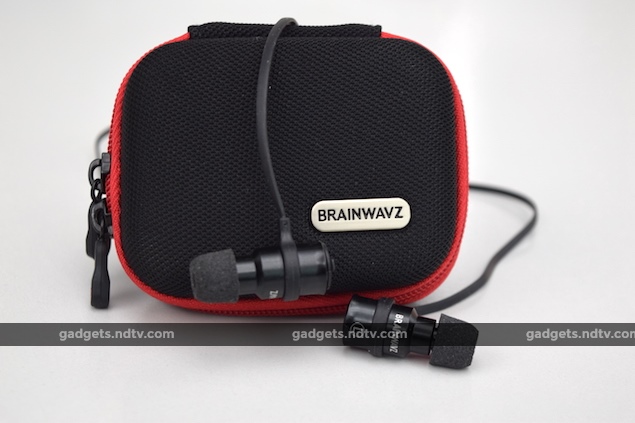 Verdict
We quite like the neutral, laidback sound of the Blu-100, and would easily recommend it to anyone looking for a no-frills pair of Bluetooth earphones. Moreover, the price of the Blu-100 is its biggest advantage. It is a steal at Rs. 2,799. We can't think of any competitor that can match up to the level of the Blu-100 at this price. We only wish the battery life was better.