We're moving firmly into the wireless age now, and having to plug your phone or tablet into your speakers is utterly behind the times. While the use of Bluetooth to connect audio devices is fairly widespread, the popularity of streamed music is built around everyone's favourite technology - Wi-Fi.

This is due, in no small part, to Apple's proprietary AirPlay platform. AirPlay made it fast, and practically foolproof, to connect your speakers and your playback devices, and thanks to the huge popularity of Apple's iPhone and iPad devices, an ecosystem of third-party speakers quickly sprang up as well. 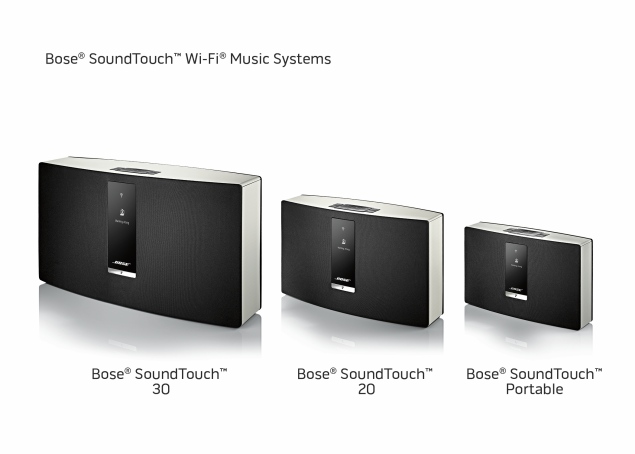 The SoundTouch 30 can be connected to your mobile phone or tablet, or you could also connect it to your computer over the Wi-Fi network, where it can access your iTunes library. Aside from that, there's also a 3.5mm input, so you can plug in a device directly as well. This means that you don't necessarily have to use it only with your Apple devices - it could be used to connect to your DVD player or music system, and used as a main speaker and not just for music streaming. The audio quality is good enough that this is actually a valid use of the speakers.

Look and feel
The SoundTouch 30 is a moderately large speaker. It's 9.7-inches tall, 17.1-inches wide, and 7.1-inches deep. The white top and back panels, and the black mesh front look elegant, but the LCD display in the centre of the mesh looks outdated.

There are 10 buttons tightly clustered on top-power, AUX (which switches the input to the standard 3.5mm jack), volume up and down, and six audio presets. The LCD display is a long vertical panel that reaches from the top to halfway down the front face, and lets you see the source, preset, Wi-Fi connection and volume level.

Not only is this speaker bulky, it's also very heavy. The Bose SoundTouch 30 weighs 8.39kgs, and the smooth shape also doesn't give you a very good grip on the speaker. This means that the speaker isn't very portable and you won't be moving it from room to room. While the wireless connectivity means that you can easily use it with different devices, you can't move these speakers around with you very easily. 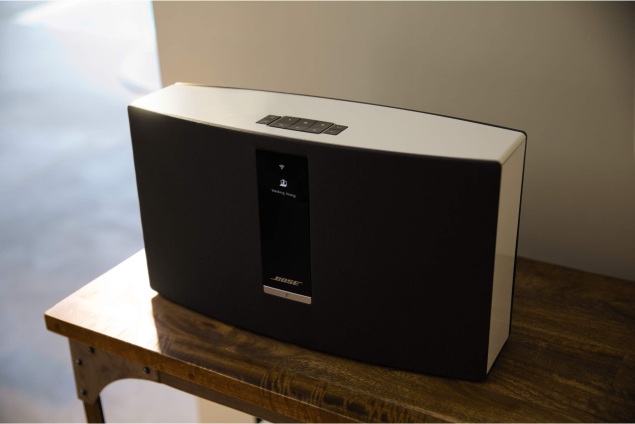 Audio performance
The good thing is that the Bose SoundTouch 30 sounds good enough that you can happily use it as a primary speaker. Obviously, that's a qualified suggestion - no one is saying that it's a high-end audiophile product, or a replacement for a surround sound home theatre system. But, if you're primarily looking for simple connectivity, and good, loud sound, then the Bose SoundTouch 30 is a good option.

To test the speakers, we first listened to a variety of music using the wireless option. The speakers are clear, possibly one of the best sounding in their size. You can get better audio for the price, but in larger enclosures.

The sound remains clear even if you raise the volume, and a range of pop, classical, hip-hop and rock songs, both classic and contemporary all sounded good. This is something Bose is justifiably famous for, and goes a long way towards justifying the high cost of the SoundTouch 30.

We further tested the speaker by connecting the AUX cable to a TV and watching a movie using this setup. The speaker sounded pretty good but obviously it's not designed for surround sound; and while it is probably still better than the speakers in most television sets, this is certainly not an ideal way of using these speakers. Still, if you're on a budget and are looking for a multipurpose device to fulfil multiple roles, then the Bose SoundTouch 30 does seem like a possibility. 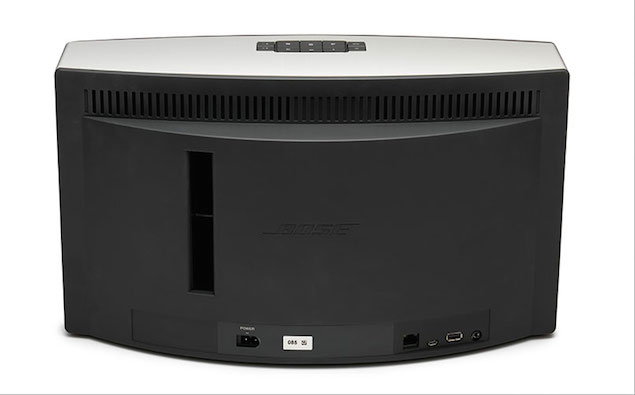 Connectivity and setup
The one major downside is connectivity. Setting up the speakers is a painful process that takes both time and multiple downloads to complete. Just connecting to the Wi-Fi requires you to plug the speakers into your PC using a USB cable, which is probably not where you're going to use them eventually, so you end up lugging around a huge and heavy speaker just to set them up. Once you've got it up and running, things are pretty painless, but the initial setup is a disaster.

The other, smaller problem, is the Bose app on your mobile or PC which is used to access your music; the user interface looks like it was made at the turn of the millennium, it's hard to navigate and doesn't communicate anything. Frankly, given the quality of the hardware, the software side of things is a huge letdown.

The Bose SoundTouch 30 also comes with an Ethernet port, which will come in handy in case you do not have Wi-Fi connectivity at your place.

Verdict
Given the high cost, it's hard to recommend the Bose SoundTouch 30, particularly as it won't be any audiophile's choice as the primary speaker. This is an interesting device which could be used in multiple scenarios, and there's no denying that it sounds good, within its category. Bose does need to improve the software side of things, but the biggest problem goes away once you've set it up The library software on the other hand has been getting updates, and will likely continue to improve slowly. The question is whether you trust them to get it right eventually or not.

Further reading: bose soundtouch 30, bose speakers, airplay, airplay speakers, audio, bose, soundtouch, soundtouch 30, speakers
Gopal Sathe Email Gopal
Gopal Sathe is the Editor of Gadgets 360. He has covered technology for 15 years. He has written about data use and privacy, and its use in politics. He has also written extensively about the latest devices, video games, and startups in India. Write to gopal@ndtv.com or get in touch on Twitter through his handle @gopalsathe with tips. More
Swipe Sonic with GSM, CDMA support now available online at Rs. 7,399
Android 4.4 KitKat on 2.5 percent devices in February's distribution charts