Share on Facebook Tweet Snapchat Share Reddit Email Comment
Whether you're a fan or not, Bose is an audio brand that commands a lot of attention and is trusted blindly by hoards of buyers. The company was founded in 1964 by Dr. Amar Bose, and has since become one of the most well-known names in high-end home audio, headphones, professional audio systems, and in-car entertainment systems.

Today, we have the successor of the AEW headphones for review, the Rs. 21,150 Bose SoundLink Around-Ear Wireless II. Like the rest of the range, its standout feature is Bluetooth audio, although you can also plug in a stereo cable and use it the way you would use traditional wired headphones. We go into the finer details with the latest addition to the Bose Bluetooth range with our review. 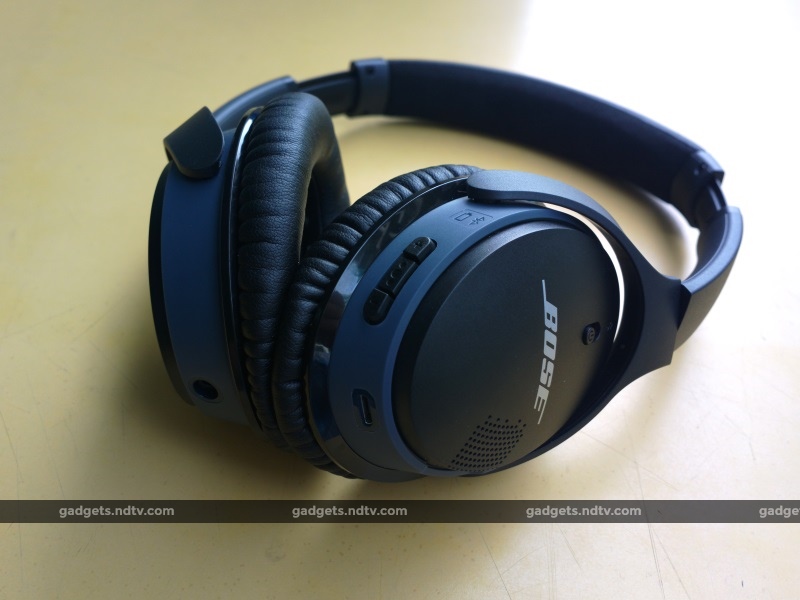 Specifications, design and comfort
The Bose SoundLink Around-Ear Wireless II is Bluetooth-powered with NFC for quick connectivity, and can be paired with two devices at a time. As previously stated, you can plug a 3.5mm stereo cable into the headphones for wired use as well. The device charges using a standard Micro-USB cable and also has a microphone and buttons for volume and playback control within convenient reach on the right earcup. The power switch doubles up as the status/pairing switch. The headset weighs a comfortable 149g.

The SoundLink Around-Ear Wireless II has a claimed wireless range of up to 9m from the source device, but it worked well even at distances greater than 9m. Battery life as claimed by the company is 15 hours, and the headset surprisingly exceeded this figure as well, going for about 20 hours before we needed to recharge. The headset takes three hours to charge completely, while a 15-minute charge will give you up to two hours of listening, as per the official spec sheet. The bundled accessories include a (rather poor quality) 3.5mm stereo cable, a USB charging cable, and a beautiful carrying case that stores the headphones and accessories comfortably. The ear cups can swivel flat for easy storage. 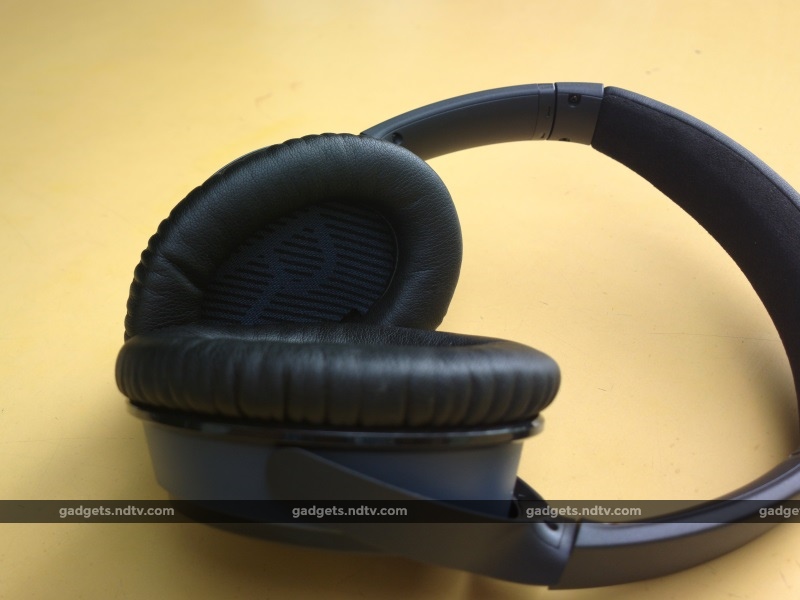 As far as looks go, the SoundLink Around-Ear Wireless II is based on the same design as the Bose QuietComfort QC25 headphones. The casings and headband are all made of plastic. Although this keeps the weight of the headset low, it feels a bit too cheap for a pair of headphones that cost a fair bit over Rs. 20,000. There is a bit too much flex in the headband that makes the headset feel flimsy. However, the quality of the switches and buttons is excellent, as is the adjustment rail. The headset is available in two colours: black and white, both of which look excellent thanks to their dull finishes.

As its name suggests, the Around-Ear Wireless II has earcups that wrap around your ears completely. The padding around the ear cups and on the headband seems a bit thin, but we found it to be adequate. On the whole, the combination of low weight, general design and lack of wires makes for an incredibly comfortable pair of headphones that we didn't need to (or want to) take off very often. 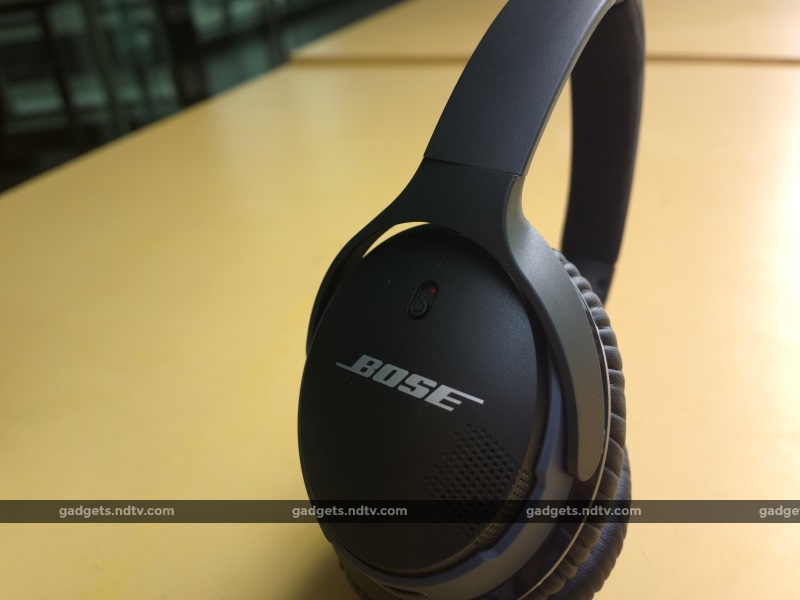 Performance
Since the Bose SoundLink Around-Ear Wireless II headphones are primarily meant to be used wirelessly, we used an HTC One M8 (Review | Pictures) as our primary source device for the review. Although we did try using it with its stereo cable, audio was transmitted using Bluetooth for the purpose of testing. Focus tracks for the review were Michael Jackson and Justin Timberlake's Love Never Felt So Good, The Prodigy's Out Of Space and Jamiroquai's Canned Heat.

Starting with Love Never Felt So Good, we were treated to a clean, tonally balanced sound that had enough to offer across the frequency range. It seemed to lack a little bit in terms of drive, punch and sparkle, but this is consistent with Bose's formula of producing a smooth, comfortable and pleasing sound signature. The beat had a bit of thump, but didn't really produce the levels of excitement that we're used to. The sound isn't quite as good as what a lot of similarly priced wired around-ear options can deliver. 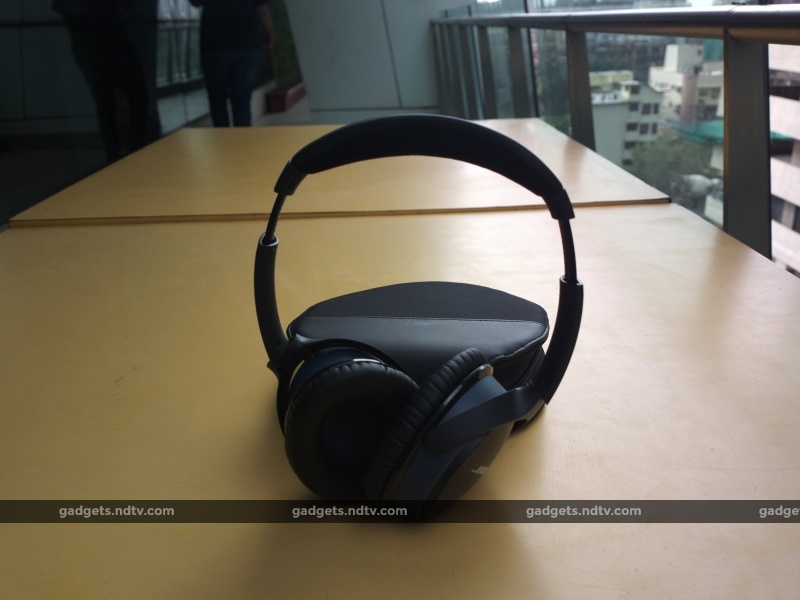 Moving on to Out Of Space, we found that the volume capability of the headset was a bit too low, compared to wired cans. With the volume settings on both the headset and smartphone maxed out, the sound just about breached a level that we could describe as loud. On the bright side, the track also revealed the quality of the tone, which was smooth and uniform across the range, with no focus on any particular band. This might be bothersome for bass lovers, but it's certainly an acceptably neutral sound, which we're willing to settle for as a trade off for the advantages of wire-free listening.

Finally, Canned Heat revealed the quality of the sound imaging. The Bose SoundLink Around-Ear Wireless II has a fairly open sound, with excellent separation of sonic elements. This results in a realistic, detailed sound that is surprisingly good for a pair of Bluetooth headphones. To some extent, this is because of Active EQ technology, which aims to transmit the recording as is without boosting any sonic elements, and ensures that all aspects of the sound are given their due focus.

Microphone and call audio quality are absolutely fantastic. The microphone effectively picks up voice and reduces background noise despite its position on the ear cup. Voice on the other end is also reproduced clearly and coherently. Furthermore, the AEWII is extremely easy to connect to and pair with the first time, thanks to NFC. Once a device is paired, it connects within three seconds of bring switched on. Voice prompts tell you which device the headphones are connected to, as well as battery level. 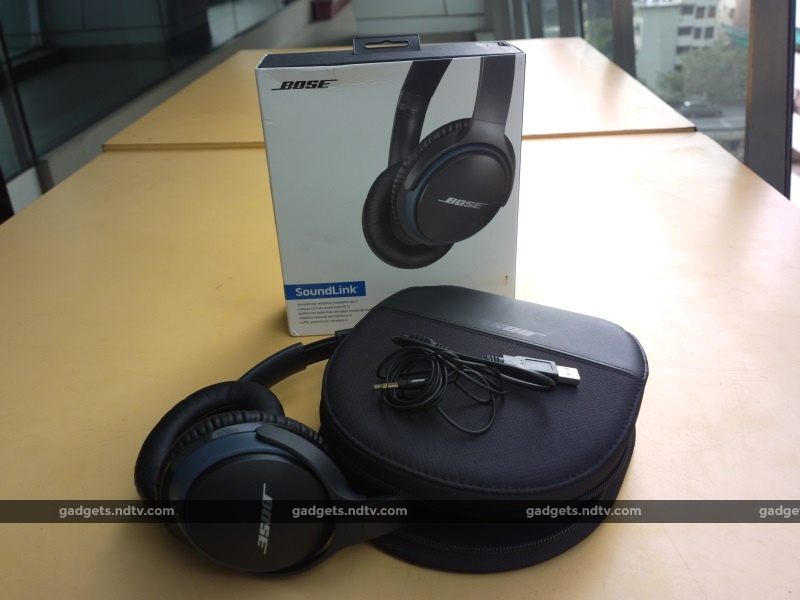 Verdict
Bose has a reputation for doing noise-cancelling well, and now we can add wireless to its bag of tricks. After the success of the SoundLink Mini and the original SoundLink Around-Ear Wireless, the SoundLink Around-Ear Wireless II is another successful Bluetooth product that raises the bar for wireless products in general. Considering that Bluetooth sound cannot match the quality of traditional wired sound, Bose has done a tremendous job in ensuring that its latest Bluetooth headset does the absolute best it can. You get the benefits of comfort and wireless audio without having to let go of too much fidelity, and this is a win in our books.

Although the sonic signature may be neutral and a bit lacking in excitement for some, it's not inadequate by any means. It's a comfortable sound that aims to please everyone while offering all the benefits of cutting the cord. It also sets the standard for comfort that every pair of headphones should strive to achieve. At Rs. 21,150, the Bose SoundLink Around-Ear Wireless II isn't cheap by any definition of the term, but if wireless audio is important to you without sacrificing too much in the quality of the sound, this is the headset for you.

product The new SoundLink Around-Ear Wireless II headset is your ticket to premium-grade, wire-free sound. 4.0 out of 5 stars