4K TVs are getting better and better each year, but if you're looking for sheer size, nothing comes close to a projector. The trade-off is that for good home cinema projection, there are certain limitations that come to play right off the bat. There's the space required for the projector and a screen, the need for a completely dark environment, and a few more niggles like the right room colour, seating, and more. For practical reasons, projectors end up in movie enthusiast territory, for those who are aiming to recreate a theatrical experience. A projector is also definitely not as easy to use as a TV. But, if you have all that taken care of, a projector is the way to go.

Now, narrowing our focus more towards the product at hand, the BenQ W1700 is a long-throw home theatre projector capable of displaying true 4K resolution and HDR, at a price tag of Rs. 2,25,000. That means you can get a 110-inch (maximum) display size at a price that's much lower than that of a premium 65-inch 4K TV. Interested? Read on.

The BenQ W1700 is not too big considering its capabilities, and should be able to fit within the same amount of space as any other standard home theatre projector. It's sized at 353mm x 135mm x 272mm, and should fit well on a shelf. Its weight of 4.2kg makes it easy to mount as well. The zoom and focus rings need to be tweaked manually. There’s no such setting on the bundled remote so you'll need to keep the projector within reach in case you need to readjust those settings manually. On the bottom of the device are three adjustable feet - a sliding one for height adjustment in the front, and two screw-type ones on the rear. Between these three we found the projector to be quite stable, despite the high speed of the fan inside the body. 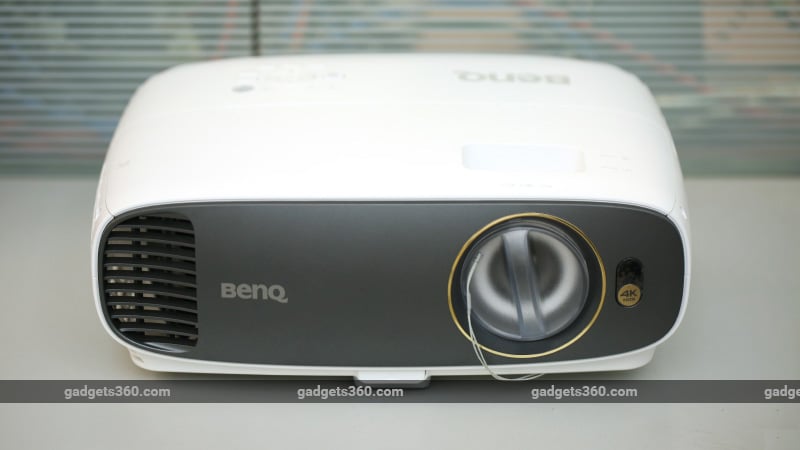 All buttons are placed on the top of the unit, and you might not use them very often considering that the remote handles all the same functions well. The back has all the ports, which include two HDMI ports, both supporting 4K and HDR input. Only the HDMI 1 port, however is HDCP 2.2 complaint, which is important to note in case you need to play any content that requires that level of copy protection (select 4K Blu-Ray titles). Other ports include a VGA input, an RS232 control port, and two USB ports (standard and mini). Both USB ports are incapable of playing media from external devices, but the USB Type-A port can also be used to power media sticks like a Chromecast. The Mini-USB port is meant only for firmware updates and tech support, a BenQ representative told Gadgets 360. There are 3.5mm ports for audio input and output, but sadly, no way to route digital audio. You will have to use a receiver or look for that particular option on your media player.

There's a good reason why the BenQ W1700 is so well priced, especially when compared to other premium 4K HDR projectors, and no, it has very little to do with picture quality. The real reason is that the projector achieves its 4K resolution using pixel-shifting - a technology that uses high-speed flashes of 1080p-resolution output and thousands of micro-mirrors to project four times as many pixels on screen. It's a smart technique to get true 4K imagery on screen at a lower cost, and also without any noticeable drawbacks. So despite the DLP (Digital Light Processing) chip rendering the 4K image as four 1080p frames, the final output on screen is 4K.

As we mentioned, the W1700 also supports HDR, but only using the HDR-10 standard - there’s no Dolby Vision support. That isn’t an issue at all when it comes to compatibility, as most devices including gaming consoles, media streamers, and Blu-ray players support it. There's also active 3D support, but only at 1080p resolution. We couldn't test this particular feature as Active 3D glasses don't ship with the projector, and are sold as optional accessories. The BenQ W1700 has a mode in which it can be used for rear projection as well, if that's your preference. 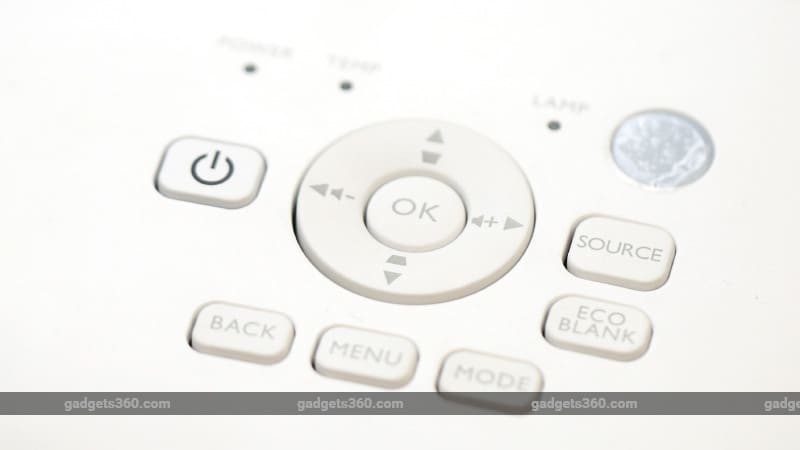 BenQ claims that the lamp brightness is 2,200 ANSI Lumens, which means that this projector will performs optimally only in pitch-black darkness. This especially applies to HDR content, because otherwise the colours will be drowned out. BenQ also claims that the contrast ratio is 10,000:1.

There's automatic keystone adjustment, but it does tend to prioritise getting the image on screen straight from the sides. This comes at the cost of the picture appearing skewed from the top and bottom, while the horizontal sides are perfectly straight. It's best to keep the projector as physically aligned with the screen as possible. 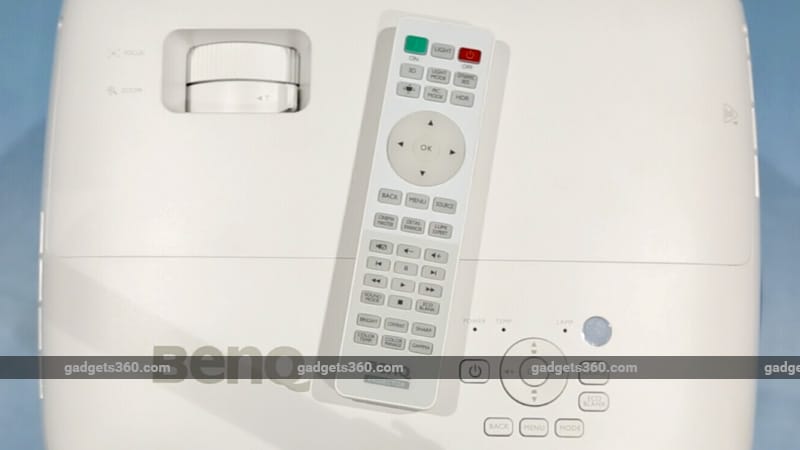 We had stated earlier that the remote is quite functional and handles just about all important functions pretty well - besides the physical zoom and focus controls, of course. The buttons are a bit on the stiffer side and do require some amount of effort to use. To make things a bit more cumbersome, the projector’s interface is slightly laggy too, and it requires a bit of patience to get the initial setup done. The remote buttons light up in bright orange when pressed, making it easy for you to see what you’re doing in complete darkness.

We tested the BenQ W1700 projector primarily by connecting it to a PS4 Pro for media playback as well as gaming. BenQ provided us with a 100-inch projection screen for testing, and we were able to fill it up by placing the projector at a distance of around 3.6m from the screen. For 4K HDR video, we tested TV shows including Stranger Things, The Punisher, Lost in Space, and more - all of which looked gorgeous. The reds especially were visibly deep in the final conflict of Stranger Things Season 2, and the warm outdoor school sequences had a level of smoothness that you can experience only with high-quality projection.

The bright sequences in Lost in Space stood out really well, but not to the point that we had to squint, as we have experienced with QLED TV panels. Still, the mix of size and intensity did look very impressive. Shows like Marvel's The Punisher on Netflix have a film-grain effect added on, which tends to look really bad on over-sharpened displays. We tried turning down the sharpening on the projector, and that resulted in a more natural-looking image. The film grain then worked more in terms of adding a 'feel' to the show rather than hogging up the foreground. 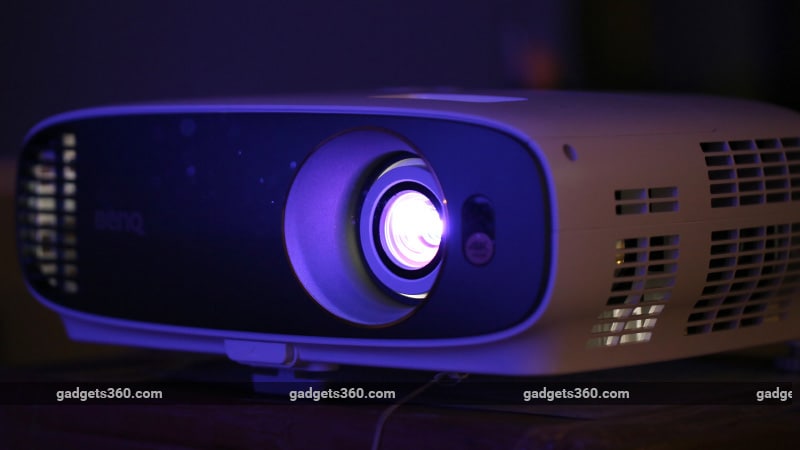 Upscaling was handled pretty well by the BenQ W1700, to the point that we couldn't tell at times whether the media playing on screen was natively 1080p, until we checked. We even played a number of YouTube videos, and the results were great. Across the board, there was no noticeable ghosting during fast action segments - a problem that plagues many projectors.

Projectors, especially DLP ones, are not usually recommended for gaming, because of their lower refresh rates, but we gave this one a spin anyway. The result was pretty impressive. We did notice a bit of input lag when trying to pull off combos in Injustice 2 - which might affect competitive first-person shooters more - but God of War, which is a story-driven action game, ran perfectly well. We can definitely recommend this non-twitch-based gaming, if you're in the mood to play on a larger-than-life display.

What did not impress us at all was the projector's black levels, but again, that isn’t something isolated to this particular model. Our testing room also had white walls and ceiling, which would minutely affect the overall black levels in a negative way as well. Watching darker shows and movies does bring this issue to the forefront. Netflix's Bright, which is a perfect example of a 4K HDR film shot almost entirely at night, had washed-out blacks which affected the movie watching experience. 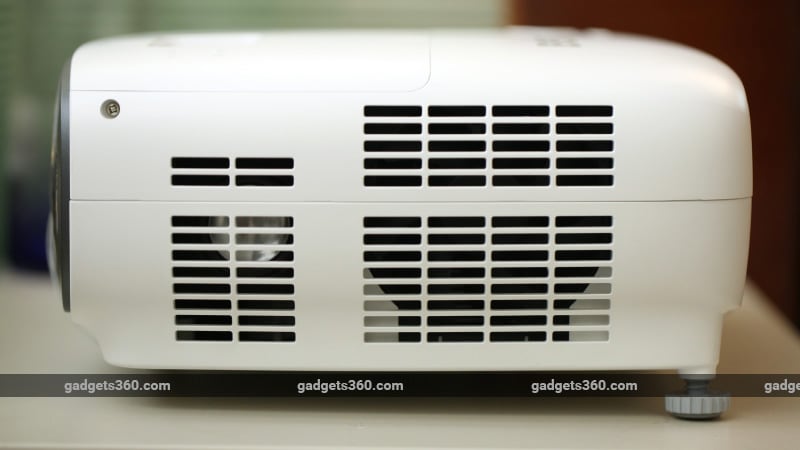 The built-in 5W mono speaker on the BenQ W1700 lacked depth, but it was quite punchy, and was loud enough to fill a fairly large 20x15ft room. That said, we'd definitely recommend an external sound system over this option.

For what it's priced at, the BenQ W1700 impressed us. It's a bit Spartan when it comes to frills such as USB media playback, wireless connectivity, or even Dolby Vision support. But its core performance is rock solid. Black levels were a bit disappointing, but that has more to do with DLP projectors in general. If your projection room is well set up with darker materials, the black levels should theoretically improve, but still won’t be anywhere close to what you'd get from a TV. We would still say the pros outweigh the cons, and the 4K HDR output of the BenQ W1700 was amazing even on a 100-inch screen. If you want to set up a high-quality big-screen home theatre without spending too much, then the W1700 would be a good fit.

At Patent Trial, Groupon Casts IBM as Shaking Down Other Tech Companies
Comcast Concedes to Disney in Bidding War for Fox Assets