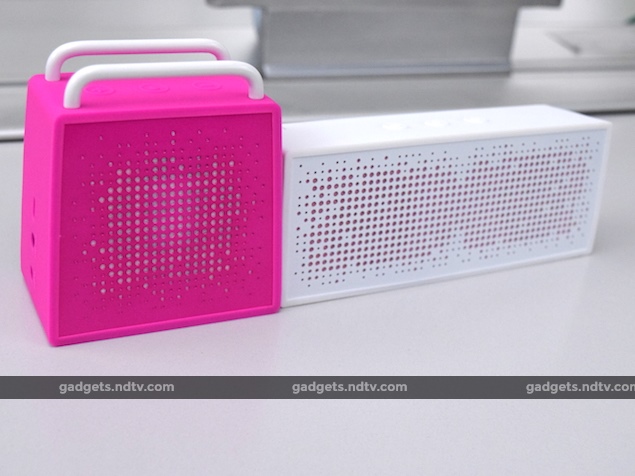 For anyone who has assembled a personal computer, the name Antec will sound familiar. The company makes cabinets, power supply units, CPU coolers and the like. A new division, Antec Mobile Products (AMP), is an attempt to diversify and tap the burgeoning smartphone accessories market.

The Antec AMP SPZero and AMP SP1 Bluetooth speakers are steps in that direction. We played around with these rugged speakers to figure out if this is a good idea for Antec. 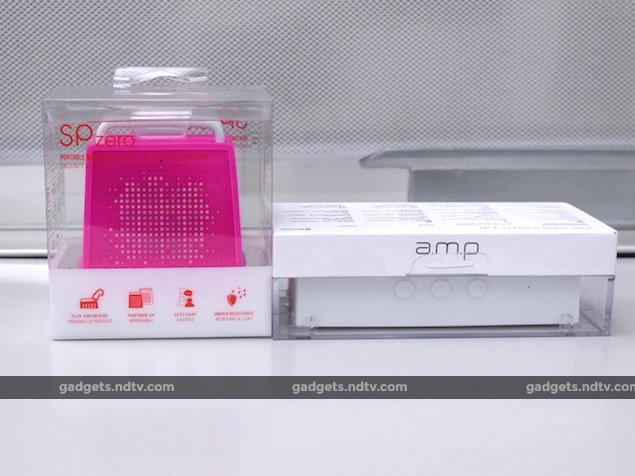 Design and specifications
At first glance, the AMP SPZero resembles a weight used on a weighing scale. This boxy speaker has dimensions of 3.4x2.2x3.7mm and weighs around 218g, which is on the higher side for a portable speaker of this size. There are two metal handlebars on top of the AMP SPZero. Antec bundles a carabiner clip inside the box which can be attached to the speaker to help carry it around easily. The AMP SPZero's tough plastic shell is covered by a layer of rubbery material. This material is not attached tight and disfigures easily, which takes away from the otherwise decent looking speaker.

The three control buttons - power/pairing, volume up and volume down - are lined up on the top. There is a hole for a microphone in between the volume down and power buttons. The LED indicator is on the front. On the right of the speaker are the Aux in, Aux out and Micro-USB ports. The Aux out port can be used to create a daisy chain with another AMP SPZero. We couldn't test if this worked because we only had a single review unit. Antec touts that these speakers are splash-proof but we are don't think the open ports are a good idea as there is a possibility of water seepage.

The SPZero has a 750mAh rechargeable battery powering it. We have no details about the driver inside the speaker. We got a magenta coloured speaker for review, but it is also available in many different colours. 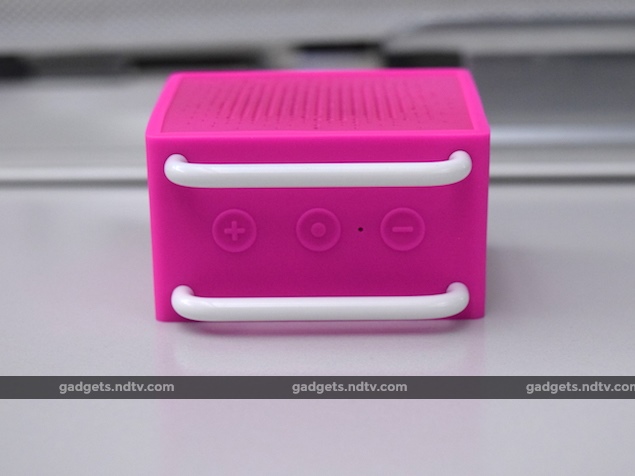 The AMP SP1 has a much larger footprint than the SPZero. Its long, rectangular enclosure has dimensions of 1.6x6.2x2.4mm inches and it weighs around 380g. Our review unit was white, but just like the SPZero, the AMP SP1 is available in other colours as well. Three controls, the same as those on the AMP SPZero, are lined up on the top and so is the microphone. The Micro-USB port and the Aux in port are on the right. Also on the right is a power switch, which effectively means that the power on and pairing technique involves one extra step with this model. The LED indicator is below this on/off switch. The ports and the switch aren't aligned properly and frankly it looks odd.

The one gripe we have, which is common to both the speakers, is that the labelling on the ports is in the same colour as each device's body. The low contrast makes it difficult to read them. 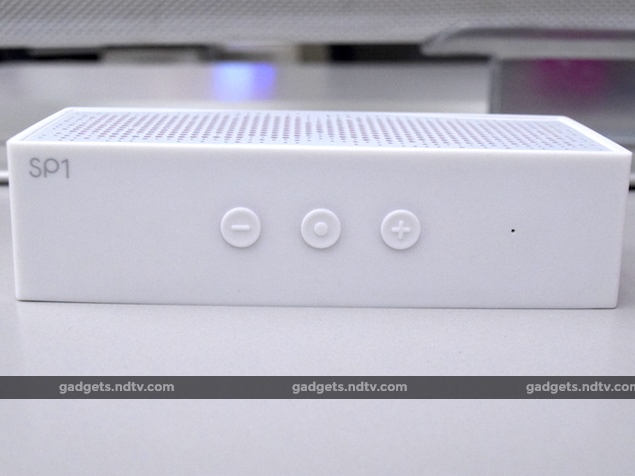 Performance
Pairing a Bluetooth-enabled device to the AMP SPZero is not very intuitive. We had to resort to the manual to figure it out. To power on the speaker you have to hold the button for a good 15 seconds, and in order to pair with an audio source you have to continue holding the button until you hear the "pairing mode" prompt in a female voice. Unfortunately, there is no pre-recorded voice on the AMP SP1 and you will have to make do with beeps. However, the pairing process is much simpler on the larger speaker because of the separate power switch. Once paired with either speaker, there is no need to pair your devices again.

The drivers inside the AMP SPZero and AMP SP1 are placed such that low frequency sounds emanate from the rear and the rest of the frequencies are played through the grille on the front. This is slightly annoying since the ranges don't mesh together nicely to create a coherent sound. This is more apparent on the AMP SPZero than AMP SP1. 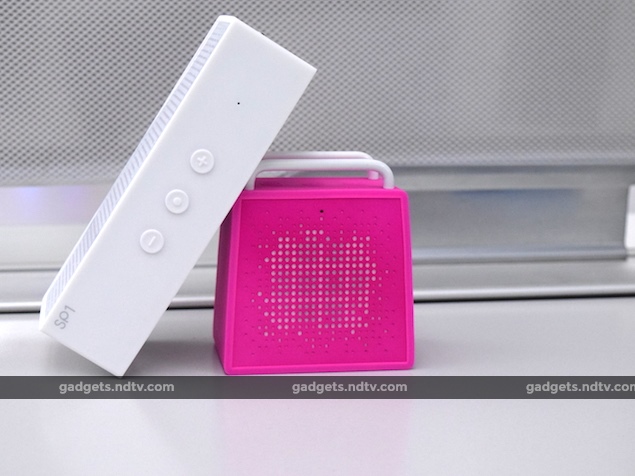 For a speaker of its size, the AMP SPZero is adequately loud. The bass is almost as good as what we experienced with the Logitech X100, which is a great compliment. It isn't very open but is sufficiently tight. The mids, however, are rather dull. One area where the AMP SPZero struggles is in its sound staging, it just cannot handle songs that have multiple complex instrument sounds.

The AMP SP1, by virtue of its larger footprint, is much louder and can easily fill up a 200 sq.ft. room. The expansive sound is also pretty crisp and open. Unlike the AMP SPZero, the bass is subdued on the AMP SP1. The mids are rather bright and open, which also overpowers the other frequencies. We played Do I Wanna Know by Arctic Monkeys and the chorus sounded rather messy. The sound staging is decent and the different instrumentsin Bernhoft's C'mon Talk are distinctly audible when they kick in.

We tested the microphones on both speakers and found them to be good for calls, but the sound was slightly muffled on our end. 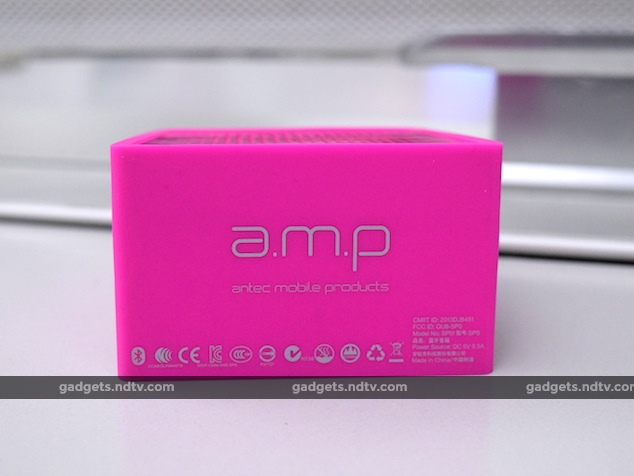 Verdict
Antec's AMP SPZero and AMP SP1 are available right now in the market for Rs. 3,120 and Rs. 5,975. We think the AMP SPZero is priced on the high side, but the AMP SP1 is aptly priced for what it offers. The Logitech X100 and the JBL Clip are great alternatives to the AMP SPZero. As far as Antec's efforts are concerned, it is on the right track. Our only suggestion at this time is to improve the finish of their future products.

Ratings for AMP SPZero (Out of 5)