The Fire TV Cube has an always-on microphone for Alexa voice commands.

There are plenty of good reasons to own a dedicated streaming device, and Amazon's Fire TV range covers most of those use cases. With prices starting at Rs. 2,999 for the Fire TV Stick Lite and going up to Rs. 5,999 for the capable Fire TV Stick 4K, the range offers simplicity, ease of use, Alexa voice assistant support, and access to all major streaming services. However, missing from India all of this time has been the company's most impressive and powerful Fire TV product yet, the Amazon Fire TV Cube (2nd Gen). It has now finally been launched here for Rs. 12,999.

The Amazon Fire TV Cube (2nd Gen) is a streaming box with not only better hardware and specifications than the Fire TV Stick 4K, but also enhanced capabilities that include hands-free access to the Alexa voice assistant. Sitting atop a table rather than hidden behind your television, the Fire TV Cube promises to combine the strengths of an Echo smart speaker and a Fire TV streaming device. Is this unique product worth the price? Find out in this review. 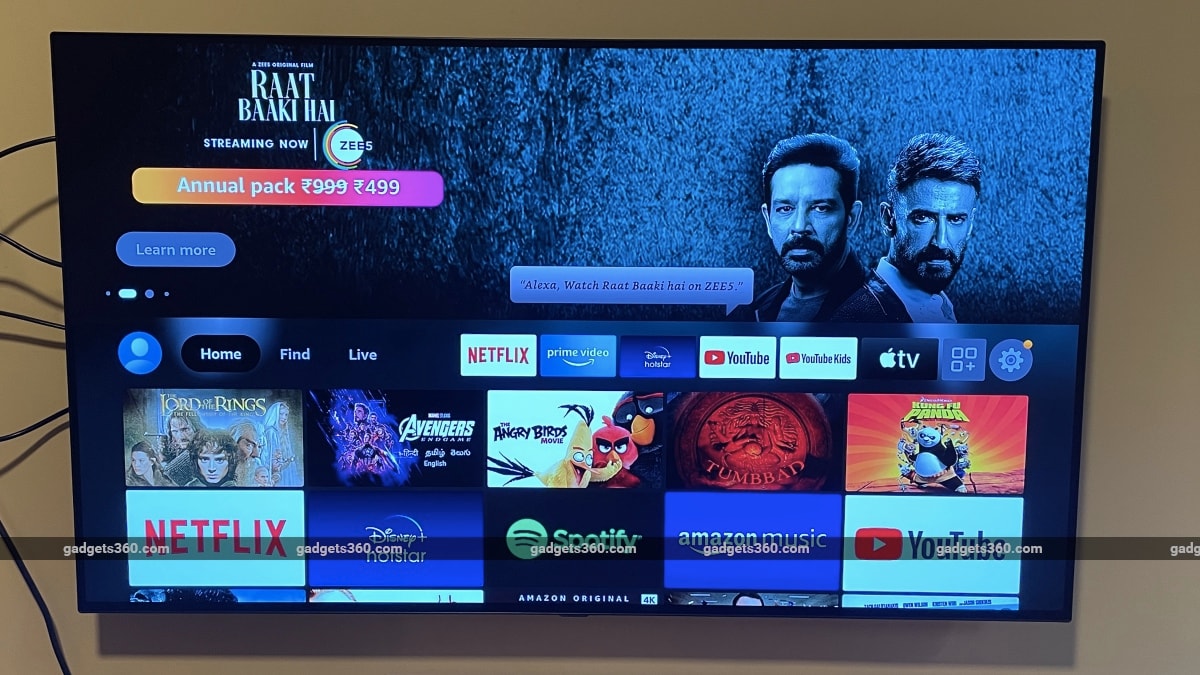 Who is the Amazon Fire TV Cube (2nd Gen) meant for?

Like all other Fire TV products, the Amazon Fire TV Cube (2nd Gen) is a standalone streaming device, and includes its own remote for controls. As the name suggests, it is shaped like a cube and is meant to sit on top of a table near your television, rather than staying hidden behind it. It's meant to be a crossover between the Fire TV range and Echo range of products from Amazon, although the Echo functionality on the device itself is limited.

There are controls for volume, muting the microphone, and invoking Alexa manually on the top, while the back has all the ports. There's a power input, HDMI, a 3.5mm socket for the included infrared extender accessory, and a Micro-USB port for the included Ethernet adapter. Wired Internet connectivity is something that isn't possible on other Fire TV devices without the use of an optional adapter. The speaker of the Fire TV Cube is at the bottom, and a light strip at the top provides visual prompts similar to the indicator lights on Echo speakers.

All you need to do is connect it to your existing setup using an HDMI cable (not included in the box), and set your TV to display from the HDMI port that the device (or your larger AV setup) is connected to. Interestingly, apart from the remote, the Fire TV Cube also allows for hands-free access to Amazon's Alexa voice assistant for voice control of the device and other Alexa-enabled devices in your home. When the microphone is on, the Amazon Fire TV Cube is always listening for the wake word (“Alexa” by default).

How does the Amazon Fire TV Cube (2nd Gen) work?

The Amazon Fire TV Cube (2nd Gen) is the company's most powerful streaming device yet. It has a hexa-core processor ( four cores at up to 2.2GHz and two more cores at up to 1.9GHz), with an integrated Mali G52-MP2 GPU, 2GB of RAM, 16GB of internal storage, and dual-band Wi-Fi. There is also HDMI CEC with easy setup, which allows you to control your television, speaker system, or soundbar that the Fire TV Cube is connected to.

Included in the sales package is the Fire TV Cube itself, a power adapter, an Ethernet adapter, an infrared extender, and the Alexa voice remote. If you're uncomfortable with keeping the device's microphone on all the time for hands-free Alexa access, the button on the remote lets you invoke the voice assistant on demand instead. You can also use it to issue voice commands more reliably in noisy rooms. 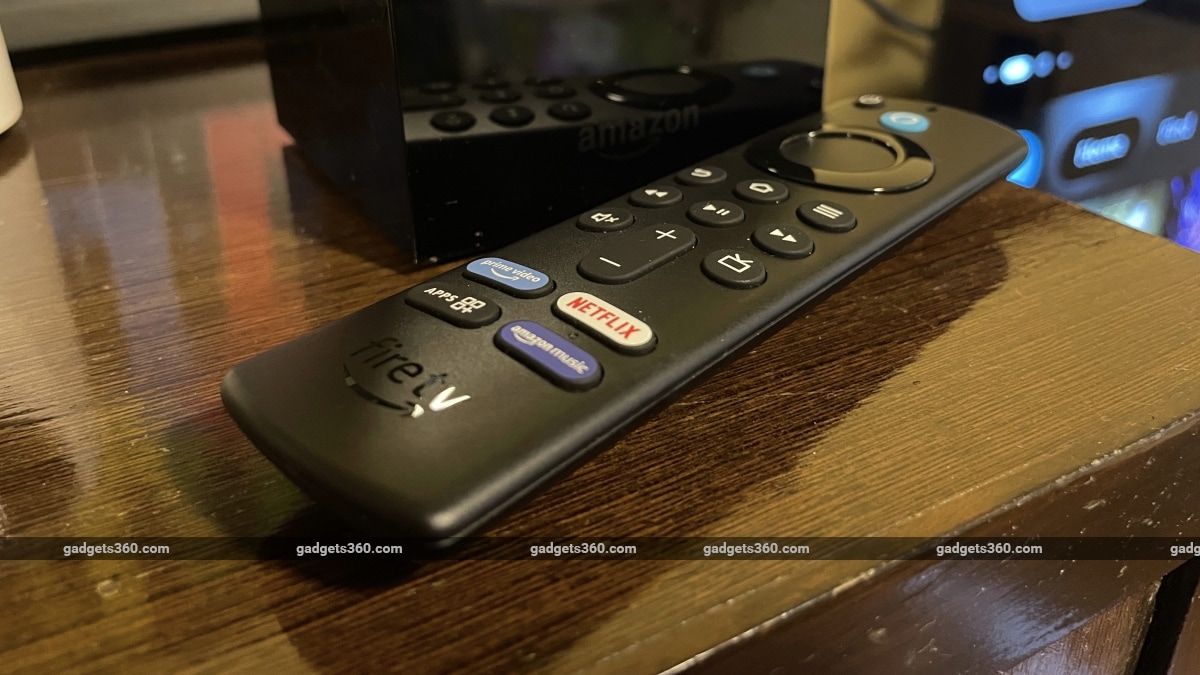 The remote of the Fire TV Cube (2nd Gen) has hotkeys for Netflix, Amazon Prime Video, and Amazon Music

The remote will be familiar for anyone who has used a Fire TV device before, with a D-Pad for navigation, volume and playback buttons, quick Home and Back buttons, and hotkeys for Prime Video, Netflix, and Amazon Music. There is also a dedicated button to access the app drawer, which is useful on the new Fire TV UI since only a handful of apps can be displayed on the home screen. It's powered by two AAA batteries, which are included in the box.

As with other streaming devices from Amazon as well as other brands, the Fire TV Cube (2nd Gen) provides the signal to your home entertainment setup, and picture and sound quality will, of course, depend on the TV and sound system you're using.

What can you do with the Amazon Fire TV Cube (2nd Gen)?

The core purpose of the Amazon Fire TV Cube (2nd Gen) is to stream video content, and the device does this just as well, if not better, than the Fire TV Stick 4K. The Fire TV Cube runs Fire TV OS, which gives access to various popular apps and streaming services, including Amazon Prime Video, Netflix, Disney+ Hotstar, YouTube, and Apple TV, among others.

Amazon Fire TV Cube (2nd Gen) devices in India come with the revamped Fire TV UI, which while still focused on Amazon Prime Video content, does make it a bit easier to find other content and system settings. While most things are best done with the remote, Alexa voice assistance makes it easy to control many basic functions with voice commands.

The Fire TV Cube (2nd Gen) is quick, responsive, and largely lag-free in its performance. Content across apps and services loaded quickly at all resolutions, and played back smoothly. However, I did face some issues with the device when connected to an LG 48CX television.

I had to constantly change the display settings on the Fire TV Cube depending on whether I was watching Ultra-HD standard dynamic range or HDR content, to ensure that I was getting the right resolution and dynamic range. Certain settings would not allow HDR10 or Dolby Vision content to display properly, while other settings would display otherwise Ultra-HD content at full-HD resolution, so I needed to keep switching depending on what I wanted to watch.

Although switching these settings wasn't too difficult and it didn't take me too long to find the right settings for the specific content, this does seem to be a software bug that not everyone will easily figure out. It's possible that such issues are specific to only certain televisions, but the experience for me was not as smooth as I had hoped.

Alexa on the Fire TV Cube (2nd Gen) can not only provide relevant responses to queries through its built-in speaker but also let you control connected smart home appliances including the Fire TV interface and connected television itself. You can use it to turn the TV on or off, select specific content, and adjust the volume. I found this rather useful, especially when watching TV while eating meals, or when I quickly needed to pause what was playing and I couldn't find the remote immediately.

It's worth pointing out here that while there is a built-in speaker for Alexa's spoken responses to commands, it can't be used to play music or other content. For content, the Fire TV Cube (2nd Gen) will send its output to the speakers of your connected television or home theatre setup, which for me was my television's built-in speaker.

This means that you can add hands-free Alexa capabilities to your existing home entertainment setup using the Amazon Fire TV Cube, along with being able to stream Ultra-HD high dynamic range content with support for key video and audio formats. Although you can directly connect this device to a good television and enjoy the benefits, it's best used with a full-fledged home entertainment setup that includes a soundbar or home theatre amplifier and multi-speaker system.

The Amazon Fire TV Cube (2nd Gen) is the most powerful device in its range, and functions as an impressive crossover of the Fire TV and Echo product lines. Although not very different from the much more affordable Fire TV Stick 4K in its core functionality, the addition of hands-free Alexa voice controls, the enhanced connectivity options, and the responsive and lag-free UI performance make this worth the additional price for advanced users.

For everyone else, depending on the TV you intend to use it with, the Fire TV Stick 4K or Fire TV Stick (3rd Gen) could make more sense since they are much more affordable and offer the same basic functionality. You could also consider the Apple TV 4K, but the Fire TV Cube's hands-free voice controls give it a significant edge over all other premium streaming devices available in India right now, if that's something that appeals to you.