The Airtel XStream Stick is priced at Rs. 3,999

The easiest and most obvious way to watch streaming content on a TV is through a smart TV platform, but streaming boxes or sticks often give you a bit more in terms of content, flexibility, and performance. We've put a lot of these devices to the test, and are usually satisfied with them because of the quality of the experience on offer. This segment has taken off in recent months, and there are now some interesting new options worth considering beyond Amazon Fire TV Stick, Apple TV, and Google Chromecast.

Today, we're reviewing one of these new options, the Airtel XStream Stick. Priced at Rs. 3,999, the XStream Stick is focused around the company's own XStream content streaming platform, but also gives you access to other services such as Netflix, Amazon Prime Video, and YouTube. More interestingly, you don't need to be an Airtel DTH subscriber to use it. We review this Android TV-powered device to find out just how good it is.

Although it's called a ‘stick', the Airtel XStream Stick doesn't look like one at all. It more closely resembles the Google Chromecast 3 when it comes to size and form factor. It is light, compact, and plugs in to the back of your TV, presumably never to be seen again during its life, so the design shouldn't matter too much.

The device has a fixed short HDMI cable and plug on one end, and a Micro-USB port and cable that connects to a power source on the other. This can be one of the USB ports on your TV (if they are rated for sufficient power delivery), or you can use the adapter included in the box and plug it into a wall socket. The sales package also includes the remote — more on that later. The Airtel XStream Stick supports streaming at up to full-HD resolution, with support for Dolby Audio. 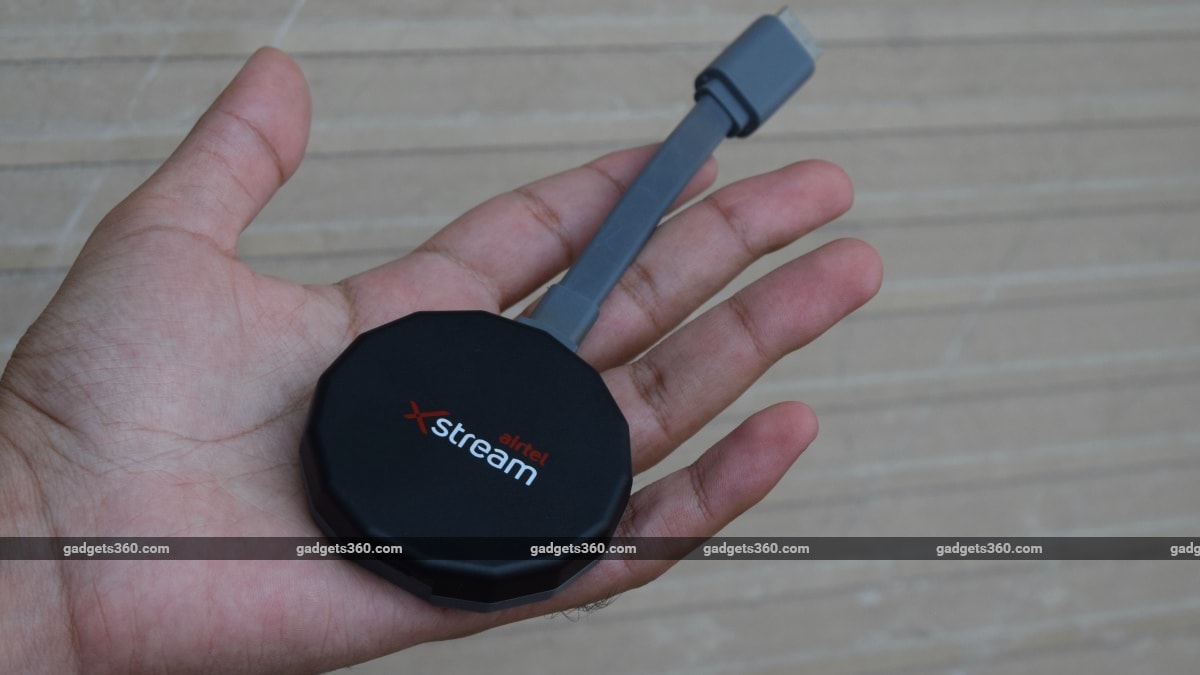 The Airtel XStream Stick connects to your TV through HDMI

The Airtel XStream Stick comes with a Bluetooth remote, which while not very feature-rich, definitely gets the basics right. We didn't like the plastic body of the remote and the oddly-shaped back, but the button layout is convenient and you get most of the controls you would need. The XStream Stick isn't HDMI CEC enabled, so you won't be able to use its remote to control your television, or vice versa.

The buttons on the remote include Home, Apps, Play/Pause, Volume, Power, Back, a Navigation D-pad, and a Netflix hotkey. We only missed having a mute button on the remote; although we could use the television's remote to mute the volume, it wasn't always convenient to hold two remotes while watching TV.

There is a Google Assistant button for voice commands, although we found that the XStream Stick was rather bad at recognising them; commands were garbled and recognised as random sets of words very often. When this did work, it provided good results that took into account movies and TV shows across various content streaming services, including Airtel's own XStream service.

The XStream Stick is powered by Android TV Oreo, and has built-in Chromecast functionality for screen casting from compatible devices. Visually though, the interface is nothing like the stock version of Android TV, thanks to the Airtel XStream launcher on top. It isn't possible to exit this launcher, so this interface is what you get.

That said, we quite liked the launcher, which puts the XStream service front and centre. It shows various titles available on the XStream platform, presented neatly and categorised smartly by genre and language. XStream fetches video and music content from various OTT streaming platforms including Hooq, Curiosity Stream, Hungama Play, AltBalaji, Ultra, Zee5, HoiChoi, Eros Now, Shemaroo, and Airtel's own Wynk Music. Access to Airtel XStream is priced at Rs. 999 per year, with the first month offered for free; we felt that this is great value for what's on offer here. 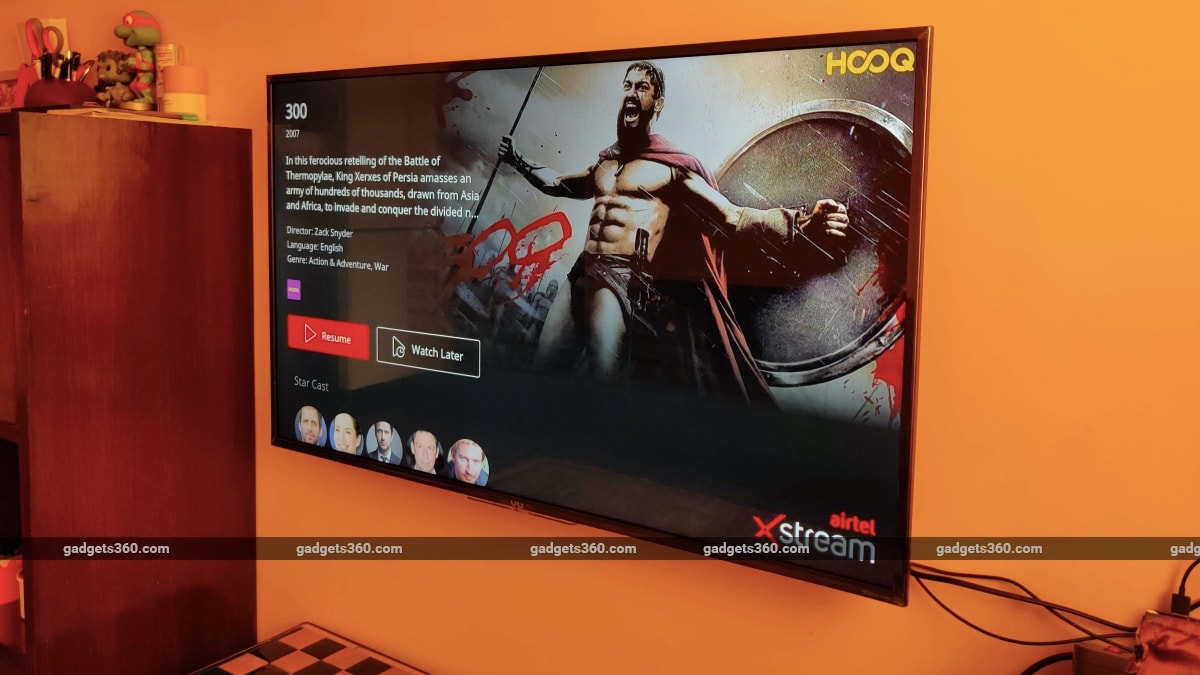 We quite liked the collection of content, with the large number of supported platforms ensuring plenty of quality and variety across languages and genres. Apart from popular movies and TV shows, you're also likely to stumble upon some vague and niche titles, which might appeal to a lot of people.

Looking beyond the XStream content, you can also download and install apps from the Google Play Store. Netflix and YouTube come preinstalled, and others such as Hotstar and Amazon Prime Video are available to download. While the XStream catalogue is the big draw here, we appreciated the flexibility in offering access to other popular services that aren't on the XStream platform; you do of course need active subscriptions to access some of these services.

We used the Airtel XStream Stick with a Vu Ultra Android Smart TV 43GA, which is a full-HD television and matches the maximum streaming resolution of the device. We largely watched content on the XStream platform for this review, but also tried other services such as Netflix and YouTube.

If you have a 4K television, the Airtel XStream Stick's full-HD limit will be disappointing. There isn't any 4K content available on the XStream platform, but Netflix and Amazon Prime Video do have growing catalogues of 4K and HDR content which you won't be able to make the most of. If that's the case, we'd suggest going for the Airtel XStream Box, which costs the same as the Stick but also gives you other features including DTH access.

If you have a full-HD TV, you'll be happy enough with the Airtel XStream Stick. Video quality is decent when using a fast connection. The remote and software are responsive and quick, and on the whole, the device does a decent job that is on par in performance to that of the Amazon Fire TV Stick.

Using Android TV apps such as Netflix and YouTube was a pleasant experience as well, as these apps have been specifically designed for use with big screens and remotes. Compatible content does use Dolby Audio, and we liked the sound quality from the device with these movies and TV shows.

Non-Dolby content didn't sound too good, and we heard some inconsistencies with volume levels and poor sound tuning on some XStream content. Turning the volume up on both the television and the XStream Stick helped us overcome that, but often became too loud for comfortable viewing. 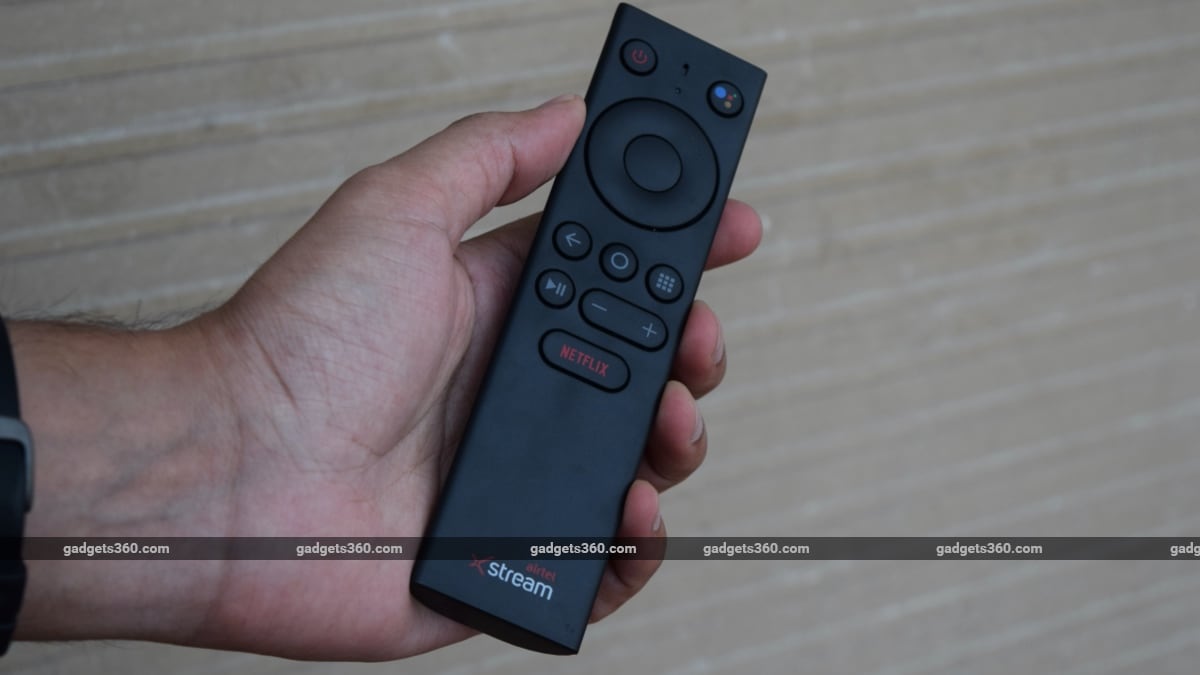 On its own, the Airtel XStream Stick is a decent device; it can make your dumb TV smart, has a well laid-out interface, has good hardware, and offers access to a wide variety of OTT content. Apart from the big streaming services, the Airtel XStream platform serves up a lot of excellent content, and we quite liked the variety of movies and TV shows on offer. It's absolutely worth your while if you want to try out the XStream service as well as Netflix and other services through a single device.

The XStream Stick seems expensive, considering that the Airtel XStream Box is also available for Rs. 3,999. However, this device does function entirely independently of a DTH connection. It doesn't quite have all the features we would have liked, such as 4K support, but it will suit cord-cutters who want to do away with a DTH connection entirely. The XStream Stick works independently of an Airtel DTH connection, and only needs to be connected to your Wi-Fi to function properly.

We found the streaming service to be useful, and our overall experience was excellent. The XStream Stick, although a bit expensive, does suit cord-cutters and users looking for a diverse and detailed catalogue of streaming content.

Further reading: Airtel, Airtel Xstream Stick, Airtel XStream, Android TV
Ali Pardiwala Email Ali
Ali Pardiwala writes about audio and video devices for Gadgets 360 out of Mumbai, and has covered the industry for a decade now. Ali is a Senior Reviewer for Gadgets 360, where he has regularly written about televisions, home entertainment, and mobile gaming as well. He is a firm believer in 4K and HDR on televisions, and believes that true wireless earphones are the future of the personal audio industry. Ali is available on Twitter as @AliusPardius and on email at alip@ndtv.com, so do send in ...More
Qualcomm's 5G Phone Forecast for 2020 Could Include iPhone Models: Analysts
Google Parent Alphabet Scrutinising Handling of Misconduct Claims