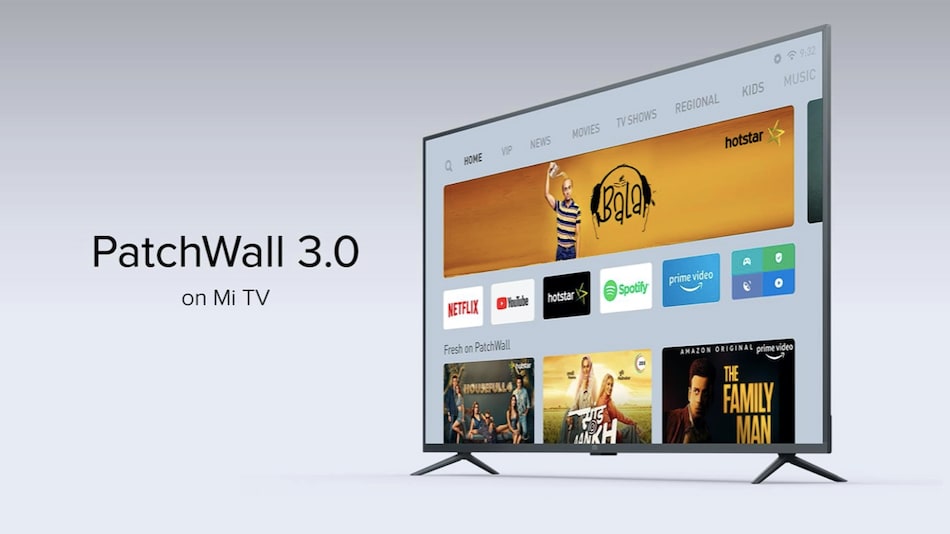 Xiaomi entered the television segment in India just a little over two years ago with the Mi TV range. Priced at Rs. 39,999, the Mi TV 4 was among the earliest affordable smart televisions in India, and made streaming and online content popular among the masses. The television also introduced the PatchWall UI, Xiaomi's custom launcher and software interface for its TVs, followed by PatchWall 2.0 which was launched in 2019. Xiaomi is now in the process of launching PatchWall 3.0, the latest iteration of its UI for televisions.

Xiaomi's newer televisions, including the Mi TV 4X range launched in late 2019, run on Google's Android TV operating system, with PatchWall 2.0 running as a launcher on top of Android TV's own stock interface. PatchWall 3.0 will function in the same way, and will be pushed out as an update for some of the models.

PatchWall 3.0 comes with a number of new features and improvements, including enhancements for the UI, cleaner animations, a new font called Mi Lanting Pro, horizontal scrolling, and more. There are also two new content partners which have their catalogues integrated into the content-first interface of PatchWall 3.0. These are Docubay, which streams international documentaries across various topics, and Lattu Kids, which offers over 1,500 hours of child-friendly content.

Other notable additions include a new dedicated sports channel which will be powered by Hotstar in India, and the Mi List. The sports channel features deep integration with Hotstar and one-click play for specific sports content, based on what is available to watch at the time of watching. Mi List features curated lists of movies and TV shows sorted and created according to genre.

Xiaomi shared some additional insights about the usage of PatchWall, stating that 4.5 billion minutes of content has been streamed on PatchWall since its launch in India. Around 82 percent of users use PatchWall every day, while 75 percent prefer it as their default launcher for their smart TVs. Avengers: Endgame and Big Boss have been the highest streamed movie and TV show respectively on the platform.

There is no specific information about which Xiaomi televisions will get PatchWall 3.0 yet, or when it will be rolling out, and we've reached out to Xiaomi for more information on this. UPDATE: Xiaomi has confirmed to Gadgets 360 that PatchWall 3.0 will be arriving for eligible Mi TV products in the second week of March, and will be rolling out to a total of 13 existing models in India, covering the Mi TV 4A, Mi TV 4C Pro, Mi TV 4A Pro, Mi TV 4 Pro, Mi TV 4X, and Mi TV 4X Pro lineups. The rollout will be completed within one week of the launch.