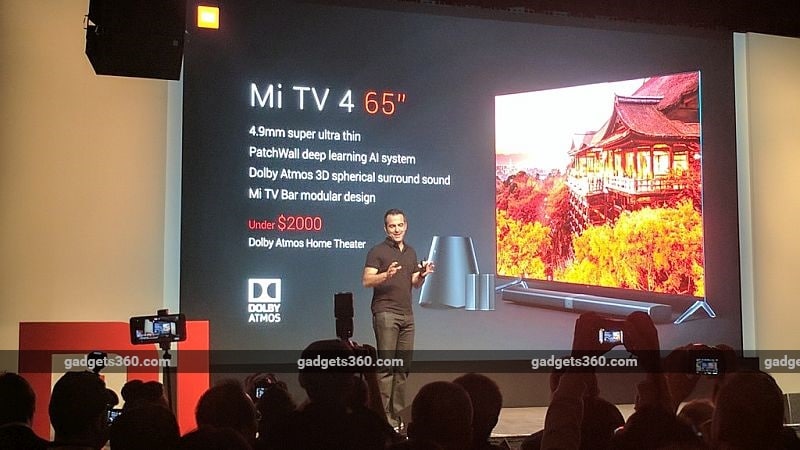 At its CES 2017 event, Xiaomi unveiled the latest Mi TV 4 and Mi Router HD, apart from announcing a brand new White colour variant of the Mi MIX smartphone. Both the Xiaomi CES 2017 devices will be available later this year in China.

At the Xiaomi CES 2017 keynote, Hugo Barra - Global VP at Xiaomi - stressed that the Mi TV 4 is the company's thinnest TV to date. Barra added that the new Xiaomi Mi TV 4 is also the first TV in its lineup to incorporate the Dolby Atmos audio technology for cinema-grade experience. Xiaomi Mi TV 4 sports a frameless design, measures 4.9mm at its thinnest point,and is claimed to be 37 percent thinner than the Mi MIX and 30 percent thinner than the iPhone 7. The new Xiaomi 4K TV comes in 49, 55, and 65-inch variants, and the company is stressing that the television is modular, allowing users to swap out motherboard and other internals when they want to upgrade.

The new Xiaomi Mi TV 4 will come bundled with the company's Mi TV Bar, which integrates 10 speakers, 2 wireless rear satellite speakers, and a subwoofer. At the CES 2017 event, Xiaomi also introduced Mi Port, which is a single cable that will connect the Mi TV Bar to the display and will carry all signals to and from the display for a clearer look. Xiaomi hasn't announced pricing details for the Mi TV 4, though Barra promised it to be "well under" $2,000 (roughly Rs. 1,35,000). The Xiaomi Mi TV 4 will be shipping in China later this year. Xiaomi also confirmed there will be another model without Dolby Atmos home theatre that will be priced under $1,500 (roughly Rs. 102,000).

Apart from design, Xiaomi has added its AI (artificial intelligence) based recommendations UI called PatchWall to the Mi TV 4. Notably, the PatchWall is a UI layer on top of the Android OS and it is based on deep learning AI technology. The new Xiaomi technology will make content recommendations using large amount of meta data about movies and TV shows alongside cross-referencing user's own content history for a tailored experience.

Xiaomi at its CES 2017 event also announced the Mi Router HD, which will be launching later in Q1 in China in 2 versions - 1TB priced under $200 (roughly Rs. 13,500) and 8TB under $500 (roughly Rs. 34,000). It comes with four PCB array antennas and supports up to 2600Mbps transfer speeds. The Xiaomi Mi Router HD is a 4x4 multi-user MIMO router with built-in surveillance-class hard drive of up to 8TB. The Mi Router HD automatically backs up all devices, and can also automatically sync the data with Dropbox.