Xiaomi on Thursday at its launch event in Beijing launched a smaller version of its Mi Box set-top box, dubbed the Mi Box Mini, alongside the Mi Note, Mi Note Pro and Mi Headphones. The ultra-compact Mi Box Mini costs CNY 199 (approximately Rs. 2,000), and will go on sale from January 20.

As the name suggests, the Mi Box Mini set-top box is a compact device with a size similar to a smartphone's USB charger. Like the previous generation, the Mi Box Mini features an Apple TV-styled design with its square-shaped rounded corner form factor. It runs on Android 4.4.2 KitKat OS and supports Dolby DTS audio. Buyers outside China should also get access to Google Play.

Unlike Mi Box, the Mi Box Mini doesn't come with any USB port and microSD card slot. The Mi Box Mini sports a single HDMI port to connect to a TV for 1080p and 3D content streaming like videos, TV shows and more. It comes with a standard 1.5m HDMI cable and a Bluetooth remote that provides control.

The processor in the Mi Box Mini is a quad-core MediaTek Cortex-A7 processor clocked at 1.3GHz. Other specifications of the compact set-top box include 1GB of RAM, 4GB of built-in storage, dual-band Wi-Fi, Bluetooth 4.0, and DTS 2.0 with Dolby Digital Plus.

The Mi Box Mini will come in different colour options that include blue, red, orange, purple, and yellow. 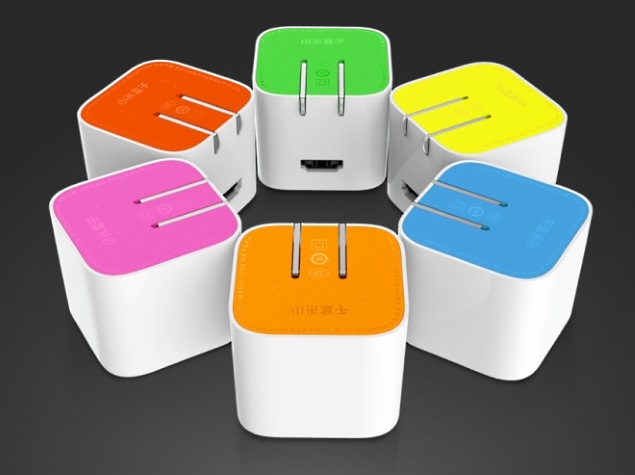 The one accessory that was launched alongside are the Mi Headphones that will cost CNY 499 (roughly Rs. 5,000) and will go on sale in coming weeks. The Mi Headphones are semi-open headphones with 50mm beryllium diaphragm speakers and interchangeable over-ear and on-ear covers. They feature a low 32-ohm impedance, and a silver-plated straight cable.