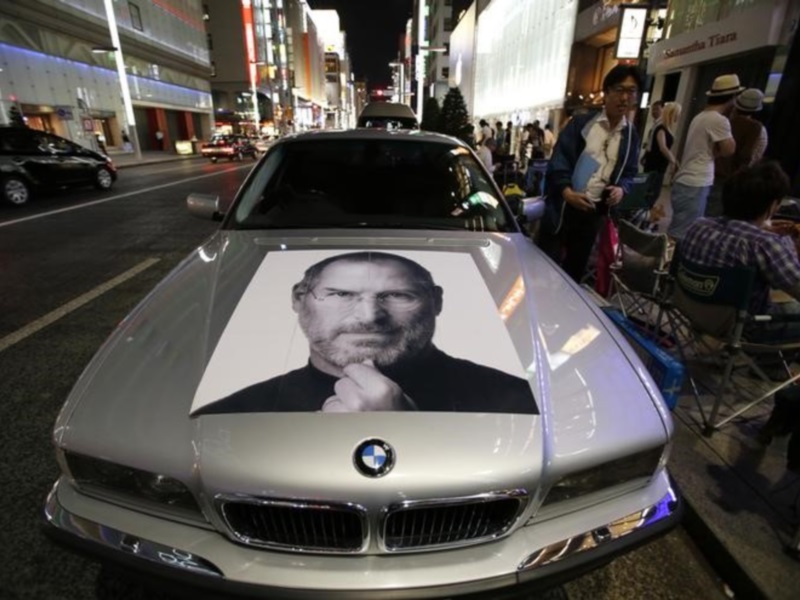 It's hard to claim ownership of Steve Jobs's legacy. Walter Isaacson wrote what may prove to be the definitive biography; Ashton Kutcher starred in what was definitely not the definitive biopic; and more than half-a-billion iPhones have been sold.

Yet, in an interview on "The Late Show with Stephen Colbert" last week, Apple chief executive Tim Cook bristled at the proliferation of Jobs-related projects - including one written by Aaron Sorkin, lately of "The Newsroom."

"A bunch of movies are coming out about Steve Jobs that aren't that flattering," Colbert said. ". . . How do you feel about those movies coming out about the guy you knew for so many years?"

"I haven't seen them, but the Steve I knew was an amazing human being," Cook said. "He's someone that you wanted to do your best work. He invented things that I think other people could not. He solved problems other people could not. He had this uncanny ability to see around the corner and to describe a future - not an evolutionary future but a revolutionary future - and he was a joy to work with. I love him dearly and I miss him every day."

Cook frowned on those who spoke ill of the dead.

"I think that a lot of people are trying to be opportunistic, and I hate this," Cook concluded. "It's not a great part of our world."

This prompted Sorkin - the frenetic, recovering drug addict known for his frequent showers and dialogue-heavy writing - to respond.

Vigorously.
"Nobody did this movie to get rich," Sorkin said at a news conference for "Steve Jobs," starring Michael Fassbender as Jobs, due out in October, as the Hollywood Reporter noted. "Secondly, Tim Cook should really see the movie before he decides what it is."

"Third, if you've got a factory full of children in China assembling phones for 17 cents an hour you've got a lot of nerve calling someone else opportunistic," Sorkin said.

Then, the screenwriter retreated - on his own behalf, and Cook's.

"You know what, I think that Tim Cook and I probably both went a little too far," Sorkin told E! News. "And I apologize to Tim Cook. I hope when he sees the movie, he enjoys it as much as I enjoy his products."

This prompted another non-response from Apple HQ in Cupertino, Calif.

Those who fear Sorkin may not present the most affable version of Jobs may have good reason to be wary. Sorkin wrote the Oscar-winning screenplay for "The Social Network" (2010), about Mark Zuckerberg and the founding of Facebook. And the portrait he painted of Zuckerberg - as, more or less, an anti-social loser - was none too flattering.

"They just kind of made up a bunch of stuff that I found really hurtful," Zuckerberg said last year. "They made up this whole plot line about how I somehow decided to create Facebook to attract girls." Perhaps to reshape the narrative, Zuckerberg famously donated $100 million (roughly Rs. 661 crores) to Newark schools as the movie hit theaters.

"I'm sorry that it did [bother him]," he said of Zuckerberg last year. "I get it completely. I know that I wouldn't want a movie made about the things I did when I was 19 years old, so I get it. Actually, I didn't set out to hurt his feelings."

Sorkin's film about Jobs is based on Isaacson's book, and there's yet to be major outcry about its content. Apple co-founder Steve Wozniak (played by Seth Rogen) offered a mixed review, objecting to some details but praising the work overall.

"In some prior movies, I saw [the actors] simulating Steve Jobs, but they didn't really make me feel like I was in his head understanding what was going on inside of him - his personality," Wozniak told the BBC. "This movie absolutely accomplishes that, and it's due to great acting, which obviously comes from great directing."