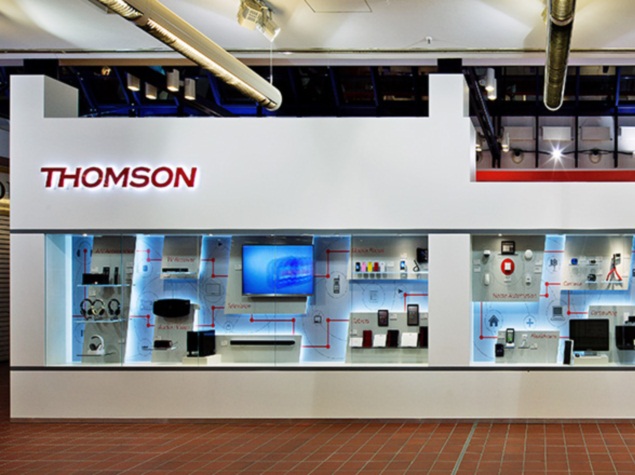 Technicolor group brand Thomson has re-entered the Indian consumer electronic market with the launch of Thomson LED TVs in Hyderabad on Tuesday.

Its licensee in India, Resolute Electronics, will invest Rs. 300 crores over the next three years in a manufacturing facility at Medchal near Hyderabad to make LED TVs and large home appliances for the Indian market.

Thomson, a global brand has entered into an exclusive licensing arrangement with Resolute Electronics, which has already invested Rs. 20 crores in building the facility.

Gopal Krishna said the facility with two production lines has the capacity to manufacture 2,000 LED TVs a day. The capacity will be doubled by the end of the current financial year, depending on the market demand.

While the first LED TV will be rolled out by August-end, the company will also start manufacturing washing machines and air conditioners within six months and refrigerators in the second phase.

The firm initially plans to market its products through Flipkart and will subsequently develop an offline sales network.

It has set a target of capturing one percent market share in LED market in the first year. It plans to increase this share to three percent in second year and five percent in the third year.

Wahl said they were excited over taking this major step in India, which has a huge consumer market of $12.5 billion (roughly Rs. 79,705 crores) per annum and is growing at a CAGR of 10 percent. "We offer the best in class technology and will bring more innovation in the market," she said.

It's a sort of re-entry for Thomson in the Indian market as it had a presence here till 2004. The manufacturing was shifted to China after Thomson consumer electronics business acquired Technicolor.

She said they rebuilt the brand in a strong way and developed all technologies. "India is now at stage of maturity which justifies the investment by a global brand like us," she said explaining the reason behind the re-entry.

With a legacy of over 100 years, Technicolor is a $3.68 billion (roughly Rs. 23,453 crores) company with 14,000 employees worldwide. It has presence in Europe, North Africa, Australia and parts of Russia.

The minister said he was happy to receive another international brand in Hyderabad. With an investment of Rs. 300 crores in manufacturing and Rs.50 crores in marketing, the facility will provide jobs to 500 people and indirect employment to 1,500 people.

He said the Telangana government was focusing on brining in manufacturers especially electronic hardware manufacturers of the state by extending incentives and initiatives like time-bound approvals.

He said mobile phone manufacturers Celkon has already set up its facility in Hyderabad while Micromax has laid foundation stone for its plant. "We are in talks with other manufacturers and working with Indian Cellular Association to make Hyderabad the mobile manufacturing hub," he added.