The new Tata Sky set-top box is said to offer one month of Tata Sky Binge service for free.

Tata Sky is reportedly going to launch its Android-powered set-top box as early as Monday, December 16. Called Tata Sky Binge+, the new set-top box by Tata Sky seems to compete against the likes of Airtel Xstream Box and Dish SMRT Hub. It is said to run Android 9 Pie and is manufactured by Paris-based company ‘Technicolor'. Tata Sky is also rumoured to offer access to over-the-top (OTT) platforms such as Amazon Prime Video and Netflix through the new set-top box. Similarly, you can expect regular television channels to be available through the same device in up to 4K resolution.

Direct-to-Home (DTH) services-focussed website DreamDTH has published the alleged details around the Tata Sky Binge+ set-top box alongside its live image. The new set-top box is said to offer OTT content via Ethernet or Wi-Fi connection in addition to supporting live TV through an RF cable connected to a satellite dish. This means that you'll get a hybrid experience.

A purported promotional brochure leaked on the website also suggests that the Tata Sky Binge+ set-to box will come along with a complimentary one-month subscription to the Tata Sky Binge service that was launched back in May alongside the Amazon Fire TV Stick - Tata Sky Edition. The service bundle will bring content from platforms such as Eros Now, Hungama Play, Hotstar, and Zee5. However, there isn't a free three months subscription to Amazon Prime that exists for customers purchasing the Fire TV Stick - Tata Sky Edition. 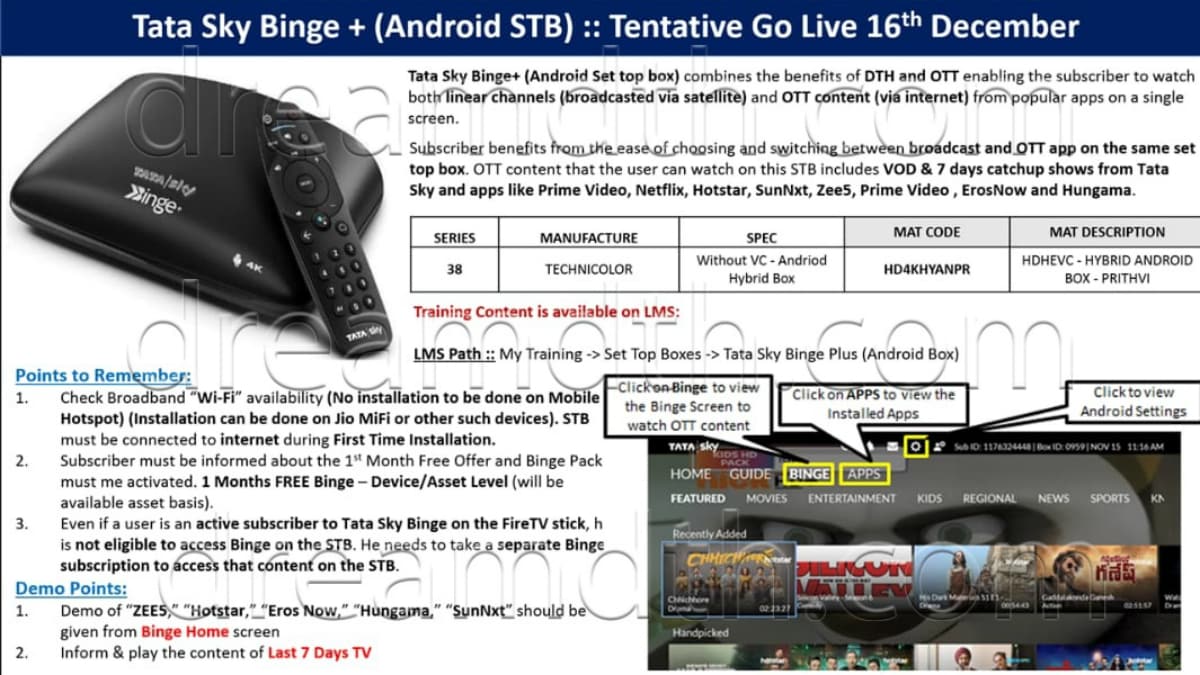 Hardware-wise, the Tata Sky Binge+ set-top box is said to have a Broadcom BCM72604 B SoC, clocked at 1.8GHz, paired with 2GB of RAM and 8GB of onboard storage. The set-top box is also rumoured to have Broadcom VideoCore V HW GPU and run Android 9 Pie.

Price details of the Tata Sky Binge+ are yet to be revealed. Nevertheless, considering the amount of information available through the leak, the DTH operator is likely to make the official announcement soon.

We've reached out to Tata Sky to get more information on the new set-top box and will update this space when we hear back.

To recall, Airtel in September brought the Xstream Box that runs Android Pie and is designed to offer over 500 TV channels. Dish TV also in October followed Airtel and launched the Dish SMRT Hub HD set-top box based on Android in October.