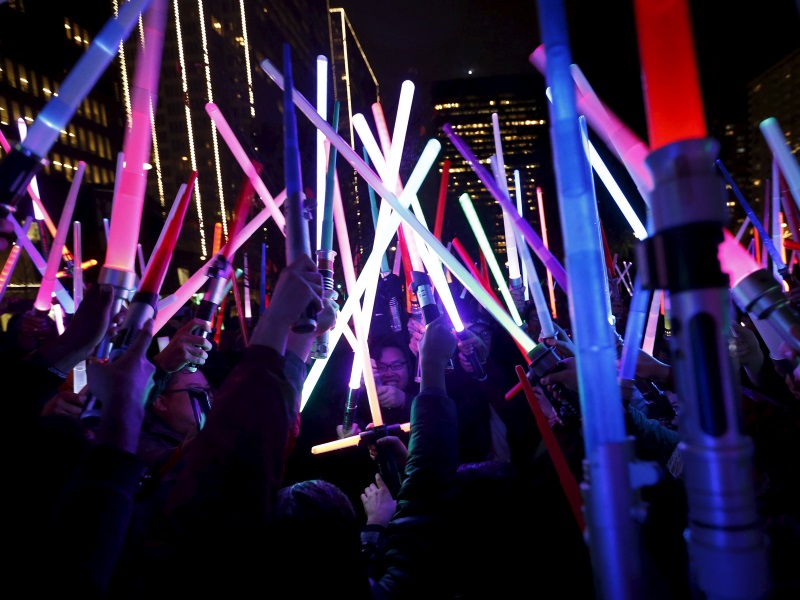 The first 'Star Wars' film in a decade recorded the biggest domestic opening in Hollywood's history, collecting $238 million (roughly Rs. 1,577 crores) over the weekend in the United States and Canada. It also set records in Britain, Australia, Russia and elsewhere as fans embraced a new chapter in the galactic battle between good and evil.

Thousands joined a mock lightsaber battle in Los Angeles, where an Australian couple married in line for the film. President Obama ended a news conference on Friday saying he needed to head to a White House screening of the movie, and presidential candidate Hillary Clinton closed Saturday's Democratic debate saying, "May the Force be with you."

"I don't think ever in the history of movies has their been more hype leading up to release of a film," said Jeff Bock, senior box office analyst at Exhibitor Relations Co. "This is a huge, huge win."

(Also see:  Star Wars: The Force Awakens Reviews Are in and They Look Really Positive)

Disney purchased "Star Wars" producer Lucasfilm for $4 billion (roughly Rs. 26,521 crores) in 2012 as part of his bet on big-budget films.

Movie theater attendance in the United States and Canada, the world's largest film market, has barely changed in a decade as online and mobile platforms exploded. Subscribers to Disney's sports powerhouse, ESPN, have shrunk, a much-noted sign of pressure on traditional media. The turnout for "Star Wars" is an encouraging result for Disney, rival media companies and movie theaters.

"We have so many options for entertainment, yet look at where everyone is flocking this weekend - to the multiplex," said Paul Dergarabedian, senior media analyst at box office tracking firm Rentrak. "Disney has this down to a science."

Global sales for "Force Awakens" finished second only to the dinosaur film "Jurassic World," which in its June opening garnered $525 million (roughly Rs. 3,481 crores) worldwide, including China, where the "Star Wars" film will not open for weeks. "Jurassic World" took $208.8 million at domestic theaters in its first weekend.

"Force Awakens" is the seventh installment in the epic science-fiction franchise created by George Lucas in 1977.

Filmgoers reveled in the return to the "Star Wars" galaxy, dressing as Jedi or Sith, carrying lightsabers and cheering when classic characters such as Princess Leia or Chewbacca appeared on screen. Theaters added showtimes to meet demand.

Disney plans four "Star Wars" movies through 2019, plus major expansions at its US theme parks to incorporate the droids, spaceships and otherworldly creatures of the universe Lucas invented. "Force Awakens" toys, clothing, home accessories and video games already pervade stores ahead of Christmas.

A Reuters Breakingviews analysis last week calculated that Disney may be on track to triple its Lucasfilm investment and earn an average of $669 million (roughly Rs. 4,435 crores) off the franchise in each of the next six years.

Critics lauded the movie's throwback feel, doses of humor and the performances of newcomers Daisy Ridley, John Boyega and Oscar Isaac. Audiences awarded an "A" grade in polling by survey firm CinemaScore.

Disney took steps to attract more women and girls to the series, including casting Ridley as the star and running commercials during shows such as "Keeping Up with the Kardashians." Forty-two percent of the weekend's domestic audience was female, Disney said.

Disney made an effort to build buzz, placing 500 miniature Stormtroopers at the Great Wall and striking a deal to stream the six earlier "Star Wars" films through video service Tencent.