Sony's The Interview Cashes In at North American Box Office 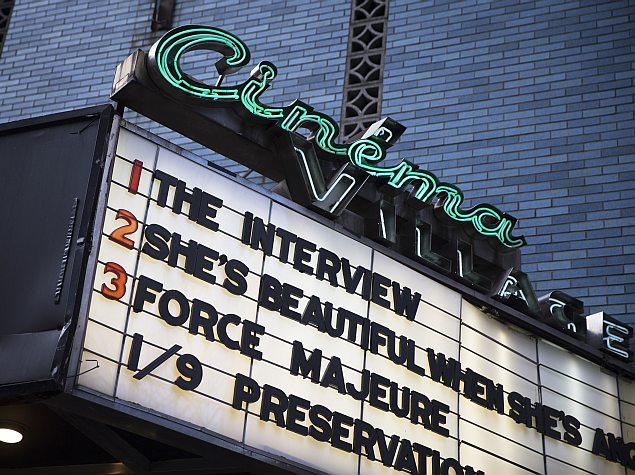 Sony initially cancelled the film's release after many of the biggest US movie theatre chains got cold feet following threats from hackers who also claimed a cyber-attack on Sony Studios.

The White House has said the attack was orchestrated by North Korea, but Pyongyang has denied any involvement.

In the end, the madcap comedy, which received widespread publicity throughout the episode, played in some 330 independent movie houses that offered to show the film after Sony came under fire for the cancellation.

It was also made available beginning Wednesday across Google Play, YouTube Movies, Microsoft's Xbox Video and on a dedicated website, seetheinterview.com

Sony has said the comedy was rented or purchased online more than two million times over four days through Saturday, for a total of more than $15 million.

In addition, "The Interview" earned an estimated $1.8 million in theaters over the weekend, adding to the $1 million it raked in on its Christmas Day limited release, according to box office tracker Exhibitor Relations.

Family fun fills cinemas
While "The Interview" did not land a spot in the North American box office's weekend top 10 for ticket sales, Tolkien's fantasy epic "The Hobbit" enjoyed a second week in first place.

"The Hobbit: The Battle of the Five Armies," directed by Oscar-winning heavyweight Peter Jackson, is the last of six films adapted from J.R.R Tolkien's books and the third and final instalment based on the author's novel "The Hobbit."

It took in $40.9 million over the weekend, its second week in theatres, for a total of $168 million since its release, according to Exhibitor Relations estimates.

In second place was "Unbroken," directed by Angelina Jolie, which tells the story of US bombardier Louis Zamperini, who was taken captive during World War II.

The film, which was snubbed at this month's Golden Globe nominations, fetched $31.1 million in its debut weekend.

Following closely behind was Disney's "Into the Woods," adapted from a Broadway musical, starring Meryl Streep as a witch who puts a curse on a childless baker and his wife.

The film, a modern twist on several Brothers Grimm fairy tales, raked in $30.6 million over the weekend.

In the number four spot was "Night at the Museum: Secret of the Tomb," the third movie in the Ben Stiller family-comedy franchise about a museum security guard trying to keep track of exhibits that come to life.

The flick earned $20.2 million in its second week in theatres.

"Annie," about the adventures of an orphan girl starring Quvenzhane Wallis in the title role and Jamie Foxx as the tycoon who takes her under his wing, sat in fifth place with $16.6 million.

The sequel, one in the hugely popular series starring Jennifer Lawrence, has earned a whopping $306.7 million in its six weeks in theatres.

In seventh was newcomer "The Gambler," staring Mark Wahlberg, which raked in $9.1 million.

"The Imitation Game," about a code-cracking mathematician and logician during World War II, was in eighth with $7.9 million.

Rounding out the top 10 were Ridley Scott's biblical blockbuster "Exodus: Gods and Kings," in ninth with $6.7 million, and "Wild," starring Reese Witherspoon, which earned $5.4 million.