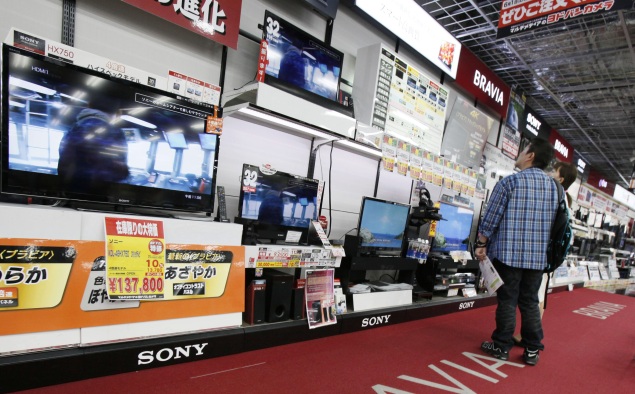 Sony Corp forecast a drop in sales of cameras and game machines this business year as its consumer gadget business struggles despite a rebound in profit to five-year highs and a boost from the weak yen.

Sony's bid for revival as an electronics maker now hinges on sales of its smartphones, which it projected to rise more than one-fourth to 42 million in the year to next March, as consumer spending converges on Apple Inc's iPads and Samsung Electronics Co's Galaxy phones.

In the year to next March, Sony expects an operating profit of 230 billion yen, compared with the average 210 billion yen profit estimated by 19 analysts surveyed by Thomson Reuters I/B/E/S before Thursday's earnings announcement.

The company bounded back into the black last year with a profit of 230.1 billion yen that was bolstered by earnings from the sale of office buildings in Tokyo and New York, the revaluation of stock holdings and gains from the sale of businesses including a chemical unit.

Its mainstay electronics business has continued to struggle however, with both its mobile and TV businesses posting losses in the last business year.

Sony's boss, Kazuo Hirai, in 2012 identified mobile products, gaming and digital imaging as the core of a rebound in consumer electronics after more than a decade of decline for the pioneer of personal music players and compact discs.

With compact cameras and its PSP and PS Vita handheld game consoles suffering under an onslaught of smartphones and tablets PCs, investor hopes for Sony have gelled around its new Xperia Z phone, which has exceeded sales targets since its launch in January.

Helping Hirai is a weakening yen that in addition to bolstering overseas earnings in yen terms is making Sony's phones and other gadgets more competitive against offerings from foreign rivals.

With greater exposure to overseas markets than domestic rivals Panasonic Corp and Sharp Corp, Sony is the best-placed among the big three TV makers to gain from the weaker yen, particularly versus the euro.

The maker of Bravia sets forecast sales of televisions to rise to 16 million this business year with the division seen returning to profit, after a sharp drop last year to 13.5 million. It had made 19.6 million TVs in the year to March 2012.

Digital camera sales are forecast at 13.5 million this year, a 20 percent drop, while its handheld game consoles, the PSP and PS Vita, are projected to fall nearly 30 percent to 5 million.

Sony has also benefited from steady earnings from music, movies and its insurance subsidiary that are in stark contrast to the prolonged doldrums in its hardware business.

Since the start of the year Sony's shares have gained 82 percent compared with a 37 percent rise in the benchmark Nikkei 225. Its shares fell 1.4 percent on Thursday to close at 1,744 yen before it released its latest forecast.