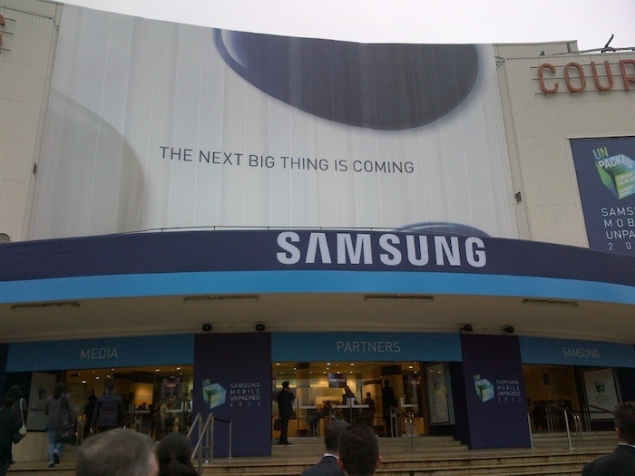 Sharp's stock jumped 17.06 percent to 350 yen in opening Tokyo trade before easing to 339 yen by the morning break.

The huge move was stoked by reports in Japan's leading Nikkei business daily and other media that Samsung was set to invest in Sharp to boost its access to screens used in its popular smartphones and tablet computers a sector where Sharp's technology is a world leader.

Sharp would sell Samsung new shares worth about 10 billion yen ($108 million), giving it a three-percent stake in Sharp and making it the Japanese firm's biggest overseas shareholder, the reports said.

Sharp, meanwhile, would use the funds to help shore up its bleeding bottom line, media reported, with an official announcement expected later Wednesday.

The maker of Aquos-brand electronics declined comment on the reports.

A decision by Sharp to accept a capital injection from a foreign firm historically a rare move for a Japanese company would mark a major comedown for both the company and Japan's manufacturers, said Hiroshi Sakai, chief economist with SMBC Friend Research Centre.

"For Japan, it is symbolic and shocking news as Sharp, which used to be a frontrunner in the panel industry, is struggling while its rival Samsung has raced past it," he said, adding that the deal "should not be any surprise" given Samsung's leading position in the global electronics market.

The deal would not solve all of Sharp's woes, he added, as the struggling firm cuts jobs and overhauls its business after saying in February that its loss in the nine months to December had doubled to about $4.6 billion.

Rival Sony, meanwhile, is selling off its headquarters in Manhattan and a major building in Tokyo to raise cash, while money-losing Panasonic is undergoing a similar painful restructuring.

Given the sector's struggles, deals between Japanese and foreign rivals are likely to increase, Sakai said.

"Many other Japanese electronics makers are struggling to survive. But they still have attractive technologies and some foreign rivals are quite interested in them," he said.

Sharp which last year warned over its own survival and put up its Osaka headquarters as collateral to clinch crucial bank loans has been hammered by lower-cost rivals in its liquid-crystal display business.

"Investors are expecting that Samsung's significant sales force would contribute to Sharp plants' operation rates, as demand from Apple is declining," he said.

Sharp expects to close its fiscal year to March with a net loss of 450 billion yen, but has backed off earlier warnings over its ability to survive.