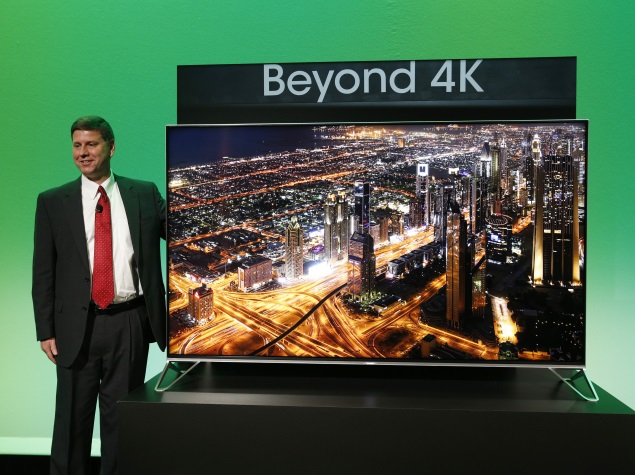 Japanese consumer electronics giant Sharp on Tuesday reversed its fiscal year profit forecast, warning that it would instead lose about $256 million (roughly Rs. 1,577 crores), largely owing to a slump in its television business.

The maker of Aquos brand electronics said it now expects to book a 30 billion JPY shortfall in the year to March, after earlier predicting a profit of the same amount, while sales would come in at 2.9 trillion JPY.

Osaka-based Sharp which lost 7.2 billion JPY in the nine months to December had warned earlier that its full-year earnings would miss previous forecasts owing to a "deterioration" in sales at home and fierce competition in the liquid crystal display business.

The disappointing reversal comes as local media, including the leading Nikkei business daily, said Sharp's top executives would take pay cuts of as much as 55 percent over the losses a common act of atonement in Japan's business world.

"We revised the previously announced forecast as we anticipate worsening profits," Sharp said in a statement on Tuesday. It also pointed to "greater-than-expected changes in (the) business environment, such as rapid fluctuations in exchange rates and a price decline in small- and medium-size LCD business".

Sharp a key Apple supplier that is a leader in screens for smartphones and tablets also pointed to weakness in its energy unit, where sales fell 29 percent from a year ago because of slumping demand for solar cells.

The company had swung back to profit in the fiscal year to March 2014 after two years of huge losses, thanks to stronger sales and cost-cutting.

Sharp, along with rivals Sony and Panasonic, has been undergoing a painful restructuring to move past years of losses that were largely tied to huge losses in its TV unit as lower-cost rivals overseas pose a heavy challenge.

However, a sharply weaker yen has partly offset the decline as it inflates the value of repatriated overseas income.

Rival Panasonic, which has said it is expecting a 140 billion JPY net profit in the current fiscal year, reports it nine-month results later Tuesday.

Sony is expected to publish partial results on Wednesday. The company earlier announced it would delay the release of its full quarterly earnings report, after a cyber-attack damaged the computer network at its Hollywood film unit.

The firm said its Sony Pictures would not have time to put together financial statements after the attack, linked to its controversial North Korea satire "The Interview", which has been widely blamed on Pyongyang.

Utility-Type Oversight for Web Is FCC Aim
Dying Light Review: Run as Fast as You Can