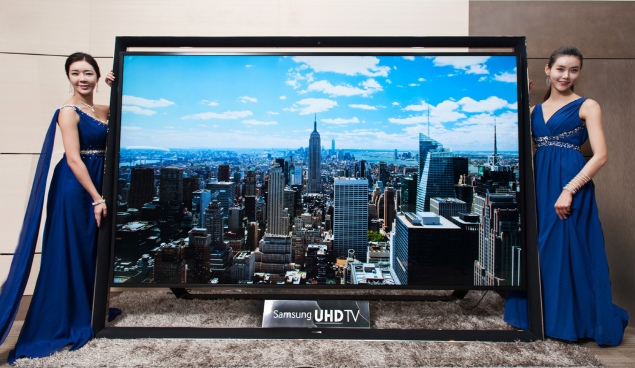 Samsung said a 110-inch TV that has four times the resolution of standard high-definition TVs is going on sale for about $150,000 in South Korea.

But Samsung and LG failed to make OLED TVs a mainstream that would replace the LCD television sets and still struggling to mass produce larger and affordable TVs with OLED. Meanwhile, Japanese media reported last week that Sony Corp. and Panasonic Corp. decided to end their OLED partnership.

Demand for UHD TVs is expected to rise despite dearth of content while its price will likely come down faster than that of the OLED TVs. Much of the growth is forecast to come from China, a major market for the South Korean TV makers. Chinese TV makers have been making a push into the UHD TV market as well.

According to NPD DisplaySearch, global sales of ultra HD TV sets will surge from 1.3 million this year to 23 million in 2017. More than half of the shipments will be taken by Chinese companies between 2013 and 2017, according to NPD.

While Chinese TV makers have been seeking to boost sales of UHD TVs with a lower price and a smaller size, Samsung's strategy is to go bigger with a higher price tag. Samsung's 110-inch UHD TV measures 2.6 meters by 1.8 meters. It will be available in China, the Middle East and Europe. In South Korea, the TV is priced at 160 million won ($152,000) while prices in other countries vary.

Samsung said it received 10 orders for the latest premium TVs from the Middle East. Previously, the largest UHD TV made by Samsung was 85-inch measured diagonally.

The ultra HD TVs are also known as "4K" because they contain four times more pixels than an HD TV.