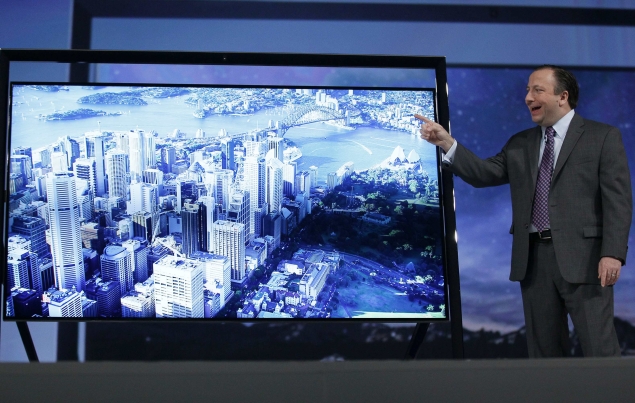 Considered the future of consumer electronics displays, the OLED technology is more energy-efficient and offers higher-contrast images than liquid crystal display, and is so thin that future mobile devices will be able to fold like paper.

The panels use an organic chemical compound as a key material which emits light in response to an electric current.

Both Samsung and its rival LG unveiled 55-inch OLED TV a year ago at the Consumer Electronics Show in Las Vegas, and this year they advanced their technology with a curved panel, which allows the distance between the user and TV screen to be the same from any angle.

LG, now the sole seller of the next-generation technology, marched ahead by taking orders for OLED TVs last week. They will not be available for delivery until February.

Samsung said it plans to launch both curved and flat OLED TVs in the first half of this year.

Due to high production costs, OLED TV is expected to take a fraction of the global TV market for the next two to three years. LG is selling its 55-inch OLED model for $10,300 (11 million won).

Japan's Panasonic Corp, in a display of technological one-upmanship with its South Korean rivals, unveiled a prototype of 56-inch OLED screen, only an inch bigger than ones unveiled by Samsung and LG at the CES on Tuesday.