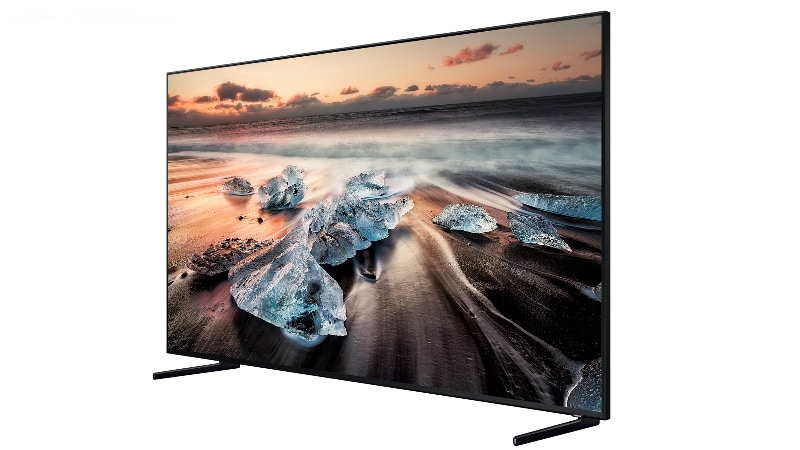 At their events ahead of IFA 2018, Samsung and LG both showcased their first commercial 8K TV offerings, previewing what the future of entertainment looks like. Samsung introduced the Q900R QLED 8K TV and LG unveiled the 88-inch 8K OLED TV in Berlin. The Samsung model will be made available in several screen sizes, and will be available in stores by the end of September. Availability of the LG 8K OLED TV variant has still not been disclosed. Thus far, no pricing has been detailed by either company. The two new series represent the first commercial 8K TVs from the companies.

Starting with the Samsung 8K QLED TV, the Q900R comes in four screen sizes - 65inch, 75-inch, 82-inch, and 85-inch. It will feature 8K-ready enhancements, including 8K resolution panel capable of 4,000-nit peak brightness, Quad-HDR 8K support, and 8K quantum processor. The 8K resolution allows the TV to produce four times more pixels than a 4K UHD TV and 16 times more pixels than a full HD TV. The Quad-HDR 8K support is powered by HDR 10+ technology, and the TV sports an 8K AI Upscaling technology to enable 8K content for a streaming service, set-top box, HDMI, USB or even mobile mirroring. It also features Direct Full Array Elite for enhanced contrast and precise backlighting control, and also sports 100 percent Color Volume for colour accuracy. It also comes with a slew of features like multiple device connectivity, and an ambient mode that showcases beautiful images, weather, news and more on the screen.

Samsung at the event also showcased a new 49-inch model in its The Frame lineup, and unveiled the HW-N950 and HW-N850 premium soundbars from Samsung and Harman Kardon. Both soundbars support Dolby Atmos and DTS:X.

The 88-inch 8K LG OLED TV comes with 7380x4320 resolution, with the company touting 33-million self-emitting pixels that produce a good quality contrast ratio and true blacks. The TV is up for display at IFA in Berlin, and as mentioned, pricing and availability is not yet announced. No other details are available at the moment. Brian Kwon, president of LG Home Entertainment Company, said in a statement, "LG's first 8K OLED TV is the pinnacle of technological achievement and the next evolutionary step in display technology. 4K OLED played a major role in reshaping TV industry and LG is confident that 8K OLED will do the same."