Rupert Murdoch Is Rebuffed in Offer for Time Warner 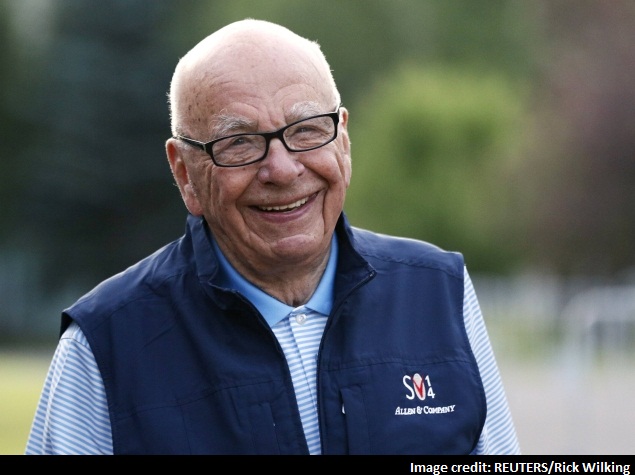 The media giant 21st Century Fox, the empire run by Rupert Murdoch, made an $80 billion takeover bid in recent weeks for Time Warner Inc. but was rebuffed, people briefed on the matter said Wednesday.

The bold approach could put Time Warner in play and might again ignite a reshaping of the media industry, prompting a new spate of mega-mergers among the nation's largest entertainment companies.

Murdoch has built a global media juggernaut over nearly five decades spanning studios, television channels and newspapers, in part, by pursuing bold deals that were often rebuffed at first by the targets of his overtures, only to later acquiesce.

Together, 21st Century Fox and Time Warner would become a colossus with an array of television networks and channels like Fox, Fox News, FX, TNT and TBS; the premium subscription channel HBO, movie studios like 20th Century Fox, Warner Bros. and other prominent outlets. It would also combine Fox's growing sports business with the broadcast rights that Time Warner owns for professional and college basketball and Major League Baseball, among other sports.

The combined company would have total revenue of $65 billion.

In a statement Wednesday, 21st Century Fox confirmed that it had made a formal offer to Time Warner last month. "The Time Warner board of directors declined to pursue our proposal," the statement said. "We are not currently in any discussions with Time Warner."

As part of the proposal to buy Time Warner, people briefed on the proposal said, 21st Century Fox indicated that it would sell CNN to head off potential antitrust concerns since Fox News competes directly with CNN. Putting CNN on the auction block would likely stir up a bidding war for the news channel; both CBS and ABC, a unit of the Walt Disney Co., have long been viewed as interested suitors.

At the time, the bid amounted to a roughly 25 percent premium to Time Warner's stock price, these people said. 21st Century Fox indicated it would pay 60 percent of the price in stock and 40 percent in cash. The media giant said it would raise $24 billion to help pay for the deal and stressed that its bid was not dependent on financing. At $85 a share, 21st Century Fox would be paying about 12.6 times the company's earnings before interest, taxes, depreciation and amortization last year.

The company estimated that a combination would create $1 billion in cost savings and possibly more, primarily by cutting sales staff and back-office functions, these people said. In its letter, 21st Century Fox insisted that it planned to keep Time Warner's most successful managers and creative executives as well as its various channels and studios.

Time Warner's board discussed the proposal at length, the people briefed said, and early this month it sent a terse letter rejecting the offer, saying the company was better off remaining independent.

Among the points of contention: The stock portion of 21st Century Fox's offer would be made using nonvoting shares, these people said. Unlike Time Warner, which has no controlling shareholder, 21st Century Fox is controlled by the Murdoch family and has two tiers of stock, voting and nonvoting.

Representatives for 21st Century Fox and Time Warner could not be immediately reached for comment.

While the talks between the two companies have thus far been considered friendly, people involved in the discussions said Murdoch is determined to buy Time Warner and is unlikely to walk away.

Murdoch has been planning the deal with his inner circle: Carey; his son James; and the company's chief financial officer, John Nallen, people briefed on the matter said.

For Murdoch, an acquisition of Time Warner might be a capstone to his long career. People close to him have said that he sees such a combination as a natural part of a consolidating entertainment industry. Time Warner itself has been part of several of the biggest mergers of the past few decades, including the merger of Time and Warner in the 1980s and the disastrous $165 billion sale to America Online at the height of the dot-com boom.

Murdoch's approach comes after Time Warner's spinoff of its legacy print publications, a move that some analysts have said could spur the interest of potential bidders. Beyond 21st Century Fox, however, it is not clear who would have both the interest and the financial firepower to pursue a deal, though rumors briefly arose that Google was interested in some sort of partnership.

Bewkes was asked last week by Variety magazine about speculation that 21st Century Fox or Google might seek a deal. He replied: "I know nothing about it."