It’s now rolling out to the OnePlus TV Q and U series.

Kids Mode on the OnePlus TV

OnePlus TV Q series and the newly-announced OnePlus TV 55U1 are now receiving a new system update — dubbed 'OTA 5' — which brings new picture modes and a 'Kids Mode', an improved version of OxygenPlay, the built-in video player, and the 'Data Saver' feature, and a re-introduction of storage expansion. If you don't see the new update yet, don't fret. In its announcement, OnePlus said it's doing a slow rollout, starting with “a small percentage of users” before going to everyone.

There are two new picture modes in the new OnePlus TV update — 'AI PQ' and 'Eyes Protection' — according to the OnePlus announcement. In AI PQ, everything is set to 'Auto' except for backlight management. Eyes Protection is built for what it says; in addition to a low backlight value, there are fine tuning adjustments in terms of colour, gamma, and sharpness, all keeping in mind to reduce eye strain. Think of it as a ‘Night Mode'.

The new Kids Mode allows you to create a separate profile for children, under which you can a range of parental controls such as allowed apps, time limits, PIN lock, and an eye protection feature. Kids Mode can be found under 'More Settings'.

While the OnePlus TV range already had a Data Saver option, the new OTA 5 update adds to that with 'Data Saver Plus', which introduces bandwidth control, data usage alerts, and monthly usage monitoring. 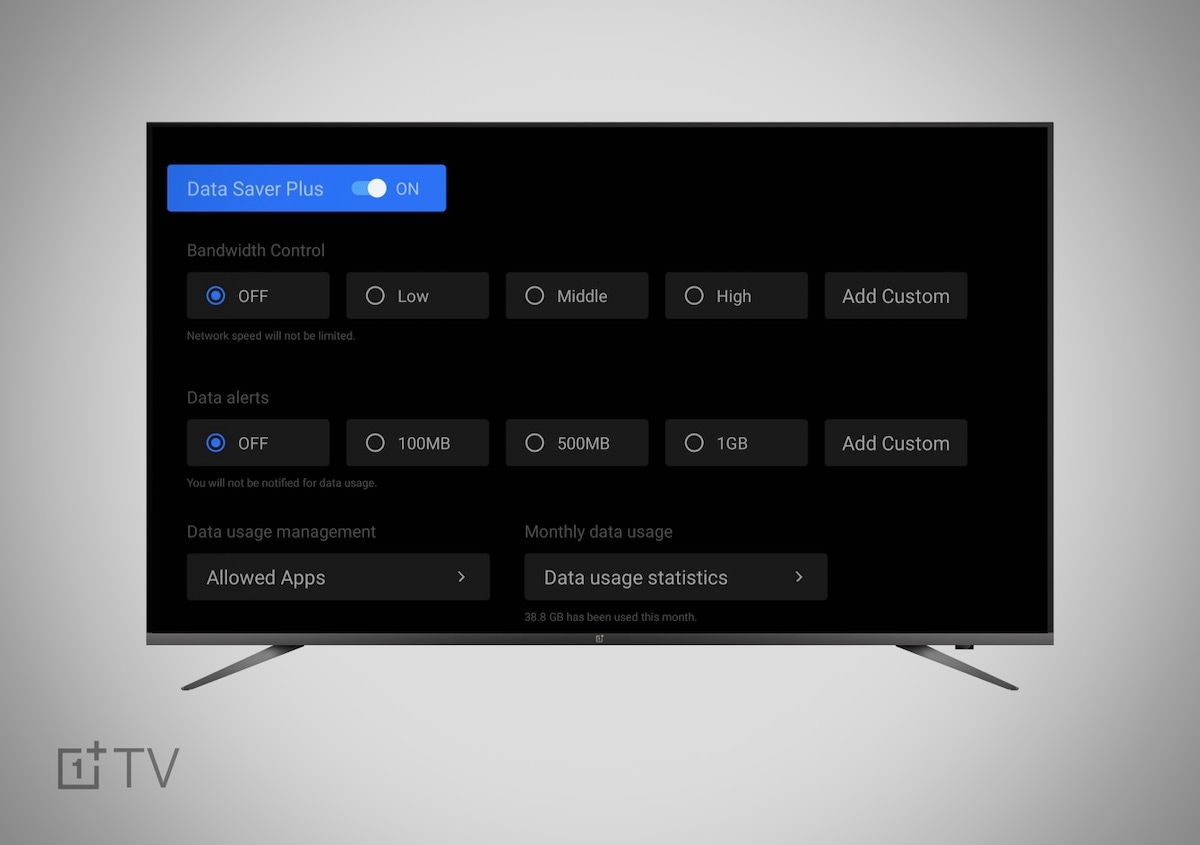 Data Saver Plus on the OnePlus TV
Photo Credit: OnePlus

The improved OxygenPlay features a new 'Upcoming' tab that allows you to set reminders for soon-to-be-released movies and TV series. You can also long press on any poster to bring up more info about said content. OxygenPlay includes more content partners and a few tweaks to 'Watch History'. The app drawer has been removed, OnePlus says, to focus more on media.

As for the built-in video player, it now allows you to choose between ‘resume playback' or ‘play from the beginning', if you return to a video that you left midway. The subtitles section has also been improved, as it will now display the languages of the available subtitles before you hit play. It can also pull up more videos from the same folder, helpful when you're binge watching a TV show. OnePlus is also promising improved HDR performance with MKV and MP4 files.

That leaves storage expansion, which was available earlier but then disappeared. The feature — known as 'Format Storage' — now returns, allowing OnePlus TV users to plug in an external drive to increase available space for apps and video files.

Beyond that, there are miscellaneous additions and tweaks. OnePlus Connect now supports iPhone and iPad, while TV Shared Album supports the OnePlus 7 and 7 Pro. The audio output section now has more options to choose from. And lastly, the Amazon Prime Video app will pick up where you left off, solving a major UX issue that plagues its performance on Android TV elsewhere.

Why do Indians love Xiaomi TVs so much? We discussed this on Orbital, our weekly technology podcast, which you can subscribe to via Apple Podcasts or RSS. You can also download the episode, or listen to it by just hitting the play button below.

Further reading: OnePlus, OnePlus TV, OnePlus TV Q1 Pro, OnePlus TV U Series, OnePlus TV 55U1
Akhil Arora Email Akhil Akhil Arora covers entertainment for Gadgets 360, interviewing stars such as Christian Bale and Anurag Kashyap, covering series premieres, product and service launches across the globe, and looking at American blockbusters and Indian dramas from a global socio-political and feminist perspective. As a Rotten Tomatoes-certified film critic, Akhil has reviewed over 150 movies and TV shows in over half a decade at Gadgets 360. When he is not completely caught up with new film and TV releases, Akhil ...More
Samsung Launches Galaxy Assured, Galaxy Forever Plans in India for Premium Galaxy Phones
Tesla Mocks Shortsellers With Sale of Red Satin Shorts