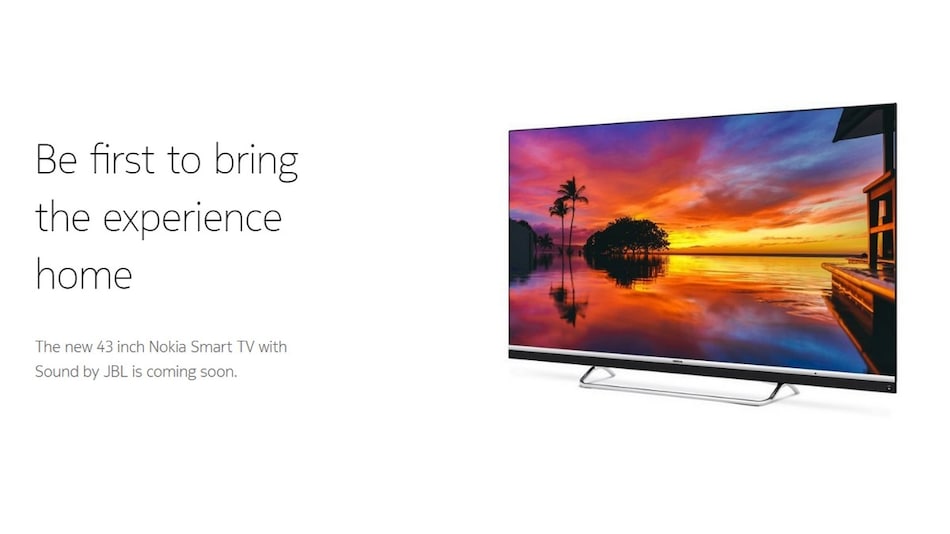 Yet another Nokia smart TV is all set to make its India debut. If Nokia website is any indication, Flipkart with brand licensing from Nokia will be releasing a 43-inch smart TV with Sound by JBL in India. While neither the e-retailer nor Nokia have shared any specifications of the smart TV, it is expected that the 43-inch model will offer the same experience as the 55-inch variant already available in India. The official Nokia website has the image of what may be the upcoming TV and it looks very similar to the 55-inch model. There is no information on pricing or availability as of yet.

The 43-inch Nokia smart TV as seen on the website follows the same design for the screen as well as the stand, as the already available 55-inch model. There seems to be a sleek looking JBL soundbar attached to the TV which was also present on the larger model. While there are no specifications listed, except for “Sound by JBL”, the 43-inch model is expected to have similar specifications as the 55-inch model currently available on Flipkart for Rs. 41,999.

Talking about the 55-inch model, it is a 4K smart TV that runs Android 9. Carrying the model number 55CAUHDN, the TV comes with an LED panel with a peak brightness of 400 nits, a quad core processor, a Mali-450 MP GPU, 2.25GB of RAM, and 16GB storage. Since it is an Android TV, you get the Google Play Store and support for apps like Netflix, YouTube, Hotstar and Prime Video. It also has Chromecast built in. Talking about the sound, it comes with two 12W speakers and support for Dolby Audio and DTS TruSurround. The 55CAUHDN has three HDMI ports, a USB 3.0 port, and a USB 2.0 port. It has Bluetooth v5.0 as well.

Whether the 43-inch model will also have a 4K (3840x2160 pixels) panel or the company will drop the resolution down to full HD (1920x1080 pixels) remains to be seen. But, it is likely that the company will retain the 4K experience for the 43-inch as well. It is also expected to run Android and have pretty much the same specifications.

Nokia has a short form on its website through which you can get launch news before others so if you're interested, visit the site, fill the form, and click on ‘Notify me'.