Netflix Now in India, Here's How You Get It

Netflix has officially announced its entry into India and 129 other markets in Asia, the Middle East, and Europe. With the move, CEO Reed Hastings said during his CES keynote address on Wednesday, Netflix is now available in "all major countries" of the world "except China", something he hopes will change soon.

Plans for the on-demand TV, movies, and video streaming powerhouse - now available in 190 countries - start in India at Rs. 500 per month for access on 1 SD screen. For Rs. 650 per month you can watch HD content on 2 screens at a time, and Rs. 800 per month will get you 4K content on up to 4 screens simultaneously. You can signup for Netflix via its website or the Netflix apps on , iOS, Windows, and other platforms.

(Also see: Netflix India Catalogue Only 7 Percent of What's Available in the US?)

You will need to enter your card details during signup - unless you are trying to make a purchase via iOS or Android and the store already has your card details - but you can enjoy a free one-month trial on all plans before you are billed. If you get an SMS for a charge of Rs. 70 or similar amount, don't worry, that's just an authorisation check, and you haven't actually been charged anything.

In case you are wondering how Netflix will impact your data usage, according to company's own documentation, an HD stream can use up to 3GB of data per hour, while SD video can take anywhere between 300 and 700MB per hour. 4K Ultra HD streaming - if you have a fast enough connection to support that in the first place - will set you back by 7GB per hour.

The India pricing is virtually identical to that in the US, where Netflix's Internet video streaming subscription rates range from $7.99 (Rs. 530 approximately) per month for 1 SD screen to $11.99 (approximately Rs. 800 per month approximately) a month for 4 HD screens, including a free one-month trial.

If you are wondering what the Netflix catalog in India is like, read our story based on interaction with Netflix executives.

Netflix is in over 70 million homes worldwide and available via a variety of devices including Web, apps, mobile, media players, TVs, gaming consoles, and more. People watched over 12 billion hours of Netflix video in Q4 2015, according to Hastings. 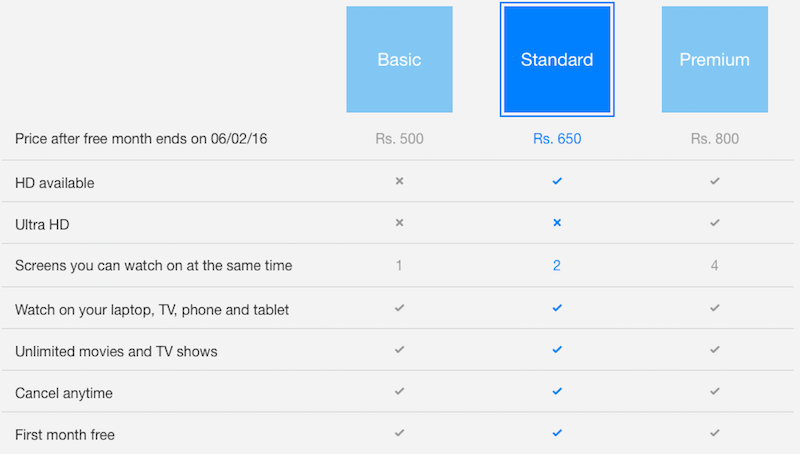 Over the years, Netflix, which offers a collection of over 35,000 movies and TV shows, has started to produce its own shows under Netflix Original moniker. Some of these original shows include Orange is the New Black, Jessica Jones, and House of Cards. These shows have been faring well with users and experts alike. In fact, for the 73rd Golden Awards, which will be held on January 10, Netflix has eight nominations.

The company has major plans for 2016. It will be debuting its first talk show, and a movie starring Brad Pitt among others. Netflix has also reserved exclusive rights to releases from Walt Disney this year.

Slowing growth in the United States has put pressure on Netflix to grow internationally and India - with over 300 million Internet users and a potential 1.2 billion plus that could come online in the next few years - is being seen as its next big growth market. Before Wednesday's announcement, Netflix was available in North and South America, Australia, New Zealand, Japan, and parts of Europe. (See: Where is Netflix available?)

Netflix will compete in India with the likes of Star's Hotstar, Singapore-based Spuul, Hungama, Eros Now, Muvizz, and many others in what is becoming an increasingly crowded space in a country that remains bogged down by slow Internet speeds.

Netflix Now in India, Here's How You Get It
Comment