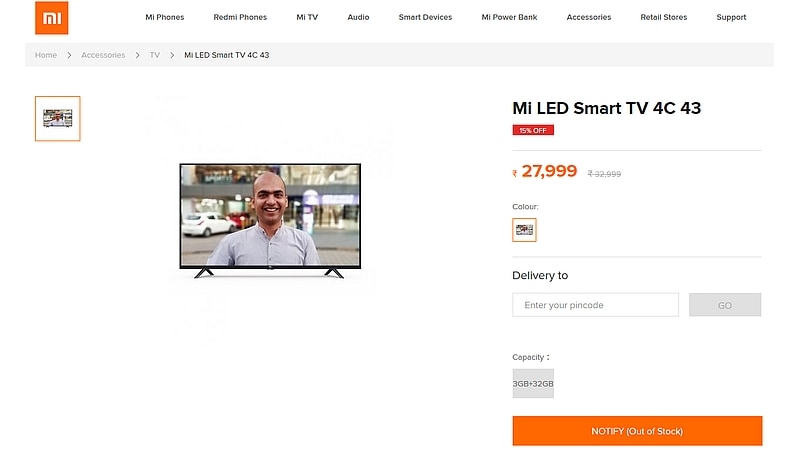 Xiaomi is all set to launch a new cheaper, smaller range of smart televisions in India, and it recently announced its new Mi TV series launch would be on Wednesday, March 7. Ahead of that launch, the 43-inch Mi TV 4C has been spotted listed on the company's India site, priced at Rs. 27,999. This is at least one of the models Xiaomi is expected to launch on the day, with a 32-inch model from the Mi TV 4A series also likely to makes its way to Indian shores. Separately, Xiaomi on Saturday launched a new television in China, the 40-inch Mi TV 4A.

The 43-inch Xiaomi Mi TV 4C that has been spotted on the Xiaomi India site (the listing was still live at the time of publishing) was first launched in China in October last year. Called the Mi LED Smart TV 4C in India, it was priced at CNY 1,849 (roughly Rs. 19,000), so the India price of Rs. 27,999 seen in the listing is a significant premium. A 15-percent off label is visible on India site listing, but it is not certain if the price seen takes into account that discount, as the model is also seen as out of stock. A 55-inch model was also launched in the Mi TV 4C series, priced at CNY 2,649 (roughly Rs. 26,000).

The Mi TV 4C's 43-inch model bears a full-HD display, 1GB RAM, 8GB storage, a quad-core Amlogic T962 64-bit processor, and supports connectivity options like Wi-Fi 802.11ac (2.4/5 GHz dual band Wi-Fi), Bluetooth 4.2, Dolby, and DTS Audio. The Mi TV 4C also sports a blue light-reducing mode to reduce eye strain problem. The processor on the Mi TV 4C series also supports HDR 10 and HLG. To get back to the other television expected to be announced - Xiaomi's cheapest and smallest TV yet - the 32-inch Mi TV 4A. It was launched at CNY 1,099 (roughly Rs. 11,300), and will probably be the highlight of Wednesday's launch.

WhatsApp for Android Now Gives You 4,096 Seconds to Delete a Message for Everyone
Oscars 2018: Netflix's Icarus Wins Best Documentary