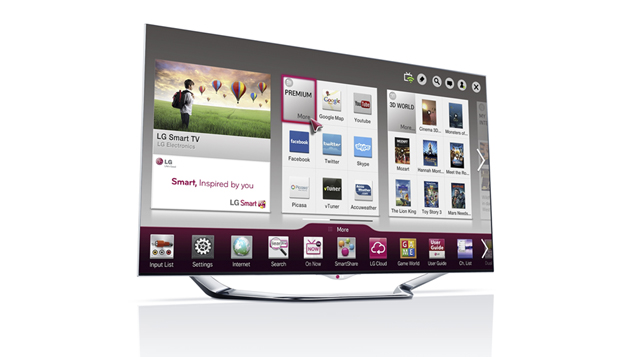 LG is all set to introduce high definition displays for mobiles, tablets, laptops and much more at this year's CES. The company has also announced a new line of TVs that will be powered by Google TV 3.0 set to debut this year.

But the Korean manufacturer still can't get enough. In a new set of announcements, the company has unveiled its Smart TV range that will feature NFC sharing and also include Miracast support.

The new LG CINEMA 3D Smart TV lineup includes an enhanced Smart Share feature that offers users the ability to transfer content from smart devices to LG Smart TVs via WiDi and Miracast. The TVs will also come with NFC stickers to enable faster media sharing between two devices with the Tag On feature. The user simply needs to hold an NFC-enabled device against the NFC sticker on a CINEMA 3D Smart TV allowing for hassle-free pairing and streaming of content.

The new lineup of TVs will come with a redesigned Smart Home interface that stacks folders into varied types of "cards" for apps and other content. The new My Interest Card can even display useful information including real-time weather and customisable news. The company has also said that it will enter into partnerships for content and gaming applications.

Users are required to use the service with a controller that is directly connected to the TV set. A new remote control dubbed as Magic Remote Qwerty comes with a built-in microphone, gesture input controls and a QWERTY keyboard as well.

The new set of TVs will also come with On Now, a helpful service that suggests trending VoD and broadcast content. The results pop-up with handy thumbnail images, making it faster and easier for the viewer to make a content selection.