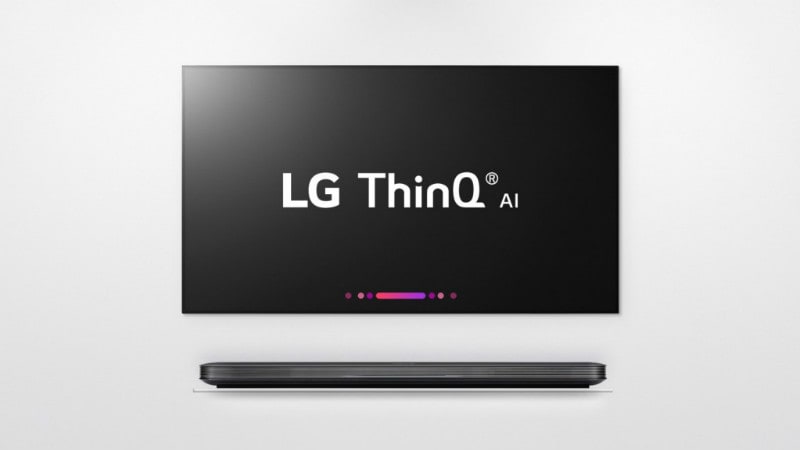 Taking on the competition, LG has announced its newest OLED and Super UHD TVs under its ThinQ artificial intelligence (AI) supporting brand. The new LG TV models will come with Google Assistant integration alongside the company's proprietary Electronic Program Guide (EPG) to deliver information in real time and let users utilise verbal commands. Among other developments, the next-generation LG OLED TVs will come with an Alpha 9 image processor that will enhance the watching experience. The major new LG OLED and Super UHD TV models will be showcased at CES (Consumer Electronics Show) in Las Vegas next week.

Leveraging Natural Language Processing (NLP) and LG's own deep learning technology, which it calls DeepThinQ, the new smart TV lineup will enable intelligent voice-activated control and connectivity. The TVs will allow users to search for information, images, or videos featuring specific content using their own uses through the available remote control. This means you would just need to say "show me all the movies this actor has starred in" or "show me yoga videos" to watch your desired content. Also, the new LG TVs based on ThinQ AI branding will let users pass instructions such as "search for the soundtrack of this movie" or "turn off the TV when this program is over" even without repeating the name of the program or entering any specific time. The Google Assistant integration will additionally enable controlling of smart home devices with voice commands.

All this will uplift the existing TV-watching experience. It is expected that LG will continue to offer webOS behind the scenes instead of opting for Google's Android TV.

In addition to the advancements using AI efforts, LG is deploying its all-new Alpha 9 image processor in its 2018 OLED TVs. The new chip is touted to support high frame rate (HFR) at a rate of 120 frames per second and comes with an improved colour correction algorithm that expands the reference colour coordinates by seven-fold than before. This helps to deliver more natural colours that were available on the previous LG TVs.

In the list of all the 2018 models, the 2018 LG Super UHD TVs will combine the company's Nano Cell, Full-Array Local Dimming (FALD) backlighting, and the Alpha 7 processor to produce deeper blacks and enhanced colours as well as nuanced shadow details. LG is also adding its 4K Cinema HDR feature to the new OLED and Super UHD TVs alongside bringing support for Advanced HDR. These tweaks will make the viewing experience superior and make the models compatible with Dolby Vision, HDR10, and HLG. Further, the new range is claimed to use a proprietary algorithm and Enhanced Dynamic Tone mapping to process HDR images dynamically frame by frame. There is also Dolby Atmos object-based surround sound support.

"At LG, our interest is in improving user lifestyles and convenience, which our 2018 TVs amply deliver," said Brian Kwon, President of LG's Home Entertainment Company, in a press statement. "LG is continually seeking to innovate in home entertainment and LG ThinQ along with the a (Alpha) 9 processor will deliver a TV viewing experience that is unrivalled in the industry."

Last month, LG unveiled the Google Assistant-enabled ThinQ smart speaker as the first model from its new AI brand. The speaker supports voice commands such as "OK Google, talk to LG, switch on the air purifier". It can also let users control their connected home appliances using their voice, just like the Google Home range. The LG ThinQ speaker is based on Meridian audio technology.

Jio vs Airtel: Prepaid and Postpaid Plans With More Than 2GB Data Per Day
Major Security Flaw With Intel CPUs Said to be Behind Secretive Updates to Linux, Windows, Amazon EC2, and Google Compute Engine