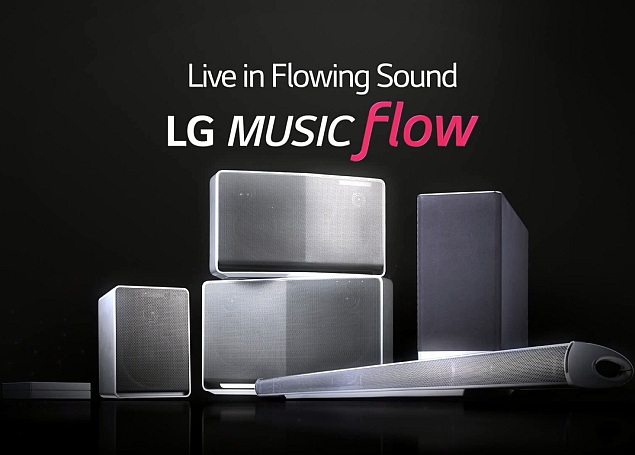 With the LG Music Flow Player app, users can centrally manage their entire digital music library (including on Internet-connected devices on the same Wi-Fi network), even if music is stored across multiple devices, and control all Music Flow units in the home. The app can also recommend songs and playlists, provide easy access to Internet radio stations and function as a smartphone music player when the user is on the go.

Other features of the LG Music Flow include Auto Music Play, with which users can listen to music outdoors on a smartphone and automatically switch to Music Flow when arriving home. LG says HomeChat integration also allows users to remotely ask LG Music Flow on the way home for song and playlist recommendations suitable for dinner guests arriving later that evening.

The South Korean giant says expand adding additional Music Flow speakers to the eco-system is easy, and users can then utilise Multi-room Mode to play the same song across all connected speakers, or a different song in each room. LG also recommends the L/R Stereo Mode for a listening experience, and Home Cinema Mode for a movie-viewing experience.

LG also claims its Music Flow system is the first in its category to feature 24 bit/192kHz Hi-Fi playback across multiple inter-connectable devices.

"LG Music Flow takes the fast-growing concept of wireless multi-room audio systems to a new level with its smart convenience and superior sound quality," said Byung-hoon Min, senior vice president of the LG Home Entertainment Company audio-video division. "Our advanced system can create a personal soundtrack that not only follows the listener from room to room, but also when the user enters the home. LG engineers have set a whole new standard by introducing features and functions to the wireless audio system category that have never been available before on competing units."