A couple of years after the emergence of its concept, LG Display has finally showcased the much-anticipated 65-inch 4K UHD rollable OLED display at CES 2018 in Las Vegas. The new prototype is much larger in size than the original 18-inch OLED display but has the same foldable design that rolled up to offer easy movability and storage. The South Korean company also unveiled its 88-inch 8K OLED display with 3.1 channel sound that would be the world's first 88-inch panel to sport 8K resolution, taking on Samsung's latest 85-inch 8K QLED TV.

The 65-inch rollable UHD OLED display is built in a way that it can be rolled up and hidden when not in use. This helps to deliver better space utilisation alongside enabling a large TV-viewing experience. Also, the panel is designed to offer a 4K resolution. 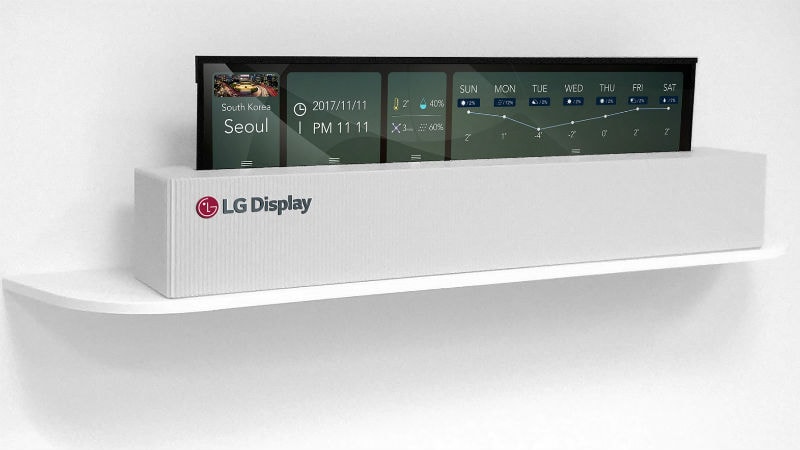 It is worth noting here that LG originally showcased an early prototype of its rollable OLED display at CES 2016. The original development was in 18-inch size though had similar foldable form-factor as of the new 65-inch panel to bring portability to new levels. Moreover, the company initially had plans to bring its foldable and rollable P-OLED screens by 2017.

Alongside the rollable OLED display, LG at the CES showcased its 88-inch 8K OLED display and a Crystal Sound OLED integration. This new technology is claimed to enable the panel to emanate sound directly from the panel. Likewise, there are developments such as 55-inch transparent display and a 77-inch wallpaper OLED TV display that would be exhibited soon. LG Display, the display division of LG, also claims to be improving the existing IPS technology by implementing IPS nano-colour and U-IPS. The former is touted to express rich colours on an IPS panel using nanoscale high-colour reproduction particles, while the latter increases the transmittance and reduces the intensity of light reflected on the panel to produce more vivid results. LG demonstrated a variety of products to showcase the new developments, including a 65-inch Art Glass display for TVs and 14-inch and 31.5-inch displays for monitors.

"We will firmly establish our position as a leading company by responding to market expectations and providing differentiated value in the rapidly expanding OLED market as well as the existing LCD market," said Dr. Sang-Beom Han, Vice Chairman and CEO of LG Display, in a press statement.