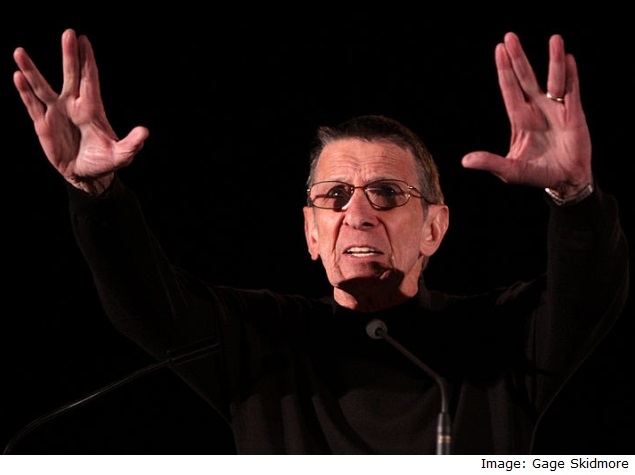 On Friday, actor Leonard Nimoy passed away. He was 83. Geeks around the world will know that name, but even if you weren't a fan of science fiction, or genre television and films, you would know the name Spock. Even if you were never a Trekkie, you would have heard the phrase "live long and prosper," and you might even know the Vulcan salute, there the first and last two fingers are held together, parted between the second and third, to make a 'V'.

It would not be fair to remember Nimoy merely as Spock, yet it is an inescapable fact that for all the actors of the original Star Trek, those were roles that could never quite be outgrown. When you think of William Shatner, you might think of Boston Legal, but you'll certainly think of Captain Kirk. George Takei has acted in dozens of movies and TV shows, but will remain helmsman Sulu forever (sorry John Cho).

Nimoy himself struggled with his fame as Spock - in 1975, he wrote his first autobiography, titled I Am Not Spock - and he spent years distancing himself from his most famous role. Eventually though, he reconciled with it, and in 1995, wrote a follow up called I Am Spock. He reprised the role of Spock in 1994, in Star Trek Generations, and then again in the 2009 reboot of the series and its 2013 sequel.

Nimoy had been unwell for some time now - he suffered from chronic obstructive pulmonary disease, and he frequently talked about the dangers of smoking, which he quit around 30 years ago. Although Star Trek first aired in 1966, many Indians saw it for the first time in the 80s. The original series was aired again in the 90s, when cable channels arrived in India. Cable television was new, and channels needed something to air. Classic science fiction was given fresh life, and audiences here didn't need to wait two decades to go from Captain Kirk to Captain Picard - for us, the gap between the original series and The Next Generation was barely noticeable.

Growing up, Spock was an impressive figure, far more so than the vitriolic and unpredictable Captain Kirk. Spock always had a measured and thoughtful response to things, and could be counted on to save the day when his more hot-headed companions got the Enterprise into trouble.

It probably didn't hurt the character's appeal that aside from his brilliant mind and logical thought processes, he was also the closest to having superpowers on the entire crew - the Vulcan nerve pinch took down many an imposing opponent, and the Vulcan mind meld gave you unparalleled insight.

But Nimoy the man was equally interesting. In the age of the Internet, it has become easier than ever to learn about your childhood heroes, and Nimoy was active on Twitter. He ended all his tweets with the acronym LLAP - short for Spock's most famous phrase - Live Long and Prosper.

If you weren't a Trekkie growing up in the 70s, you might not have known that Nimoy was a poet, and a singer. Thanks to YouTube though, we can see him singing songs like The Ballad of Bilbo Baggins.

It's hard for someone today to really understand why Nimoy - and Spock - mean so much to so many people. But Star Trek would go on to define many of the conventions of science fiction, and if it was flawed in many ways - such as its depiction of women being mostly limited to secondary characters - it was also well ahead of its time in others, particularly race. Spock was never going to panic, or say something stupid. And while he might look heartless at times, he was always willing to sacrifice himself if it would help his comrades. As a character, Spock was someone you felt you could depend upon. As a person, Nimoy was perhaps even more impressive, and it's very hard to find the right words to say goodbye. Perhaps the most fitting farewell comes from the man's own final tweet.

A life is like a garden. Perfect moments can be had, but not preserved, except in memory. LLAP