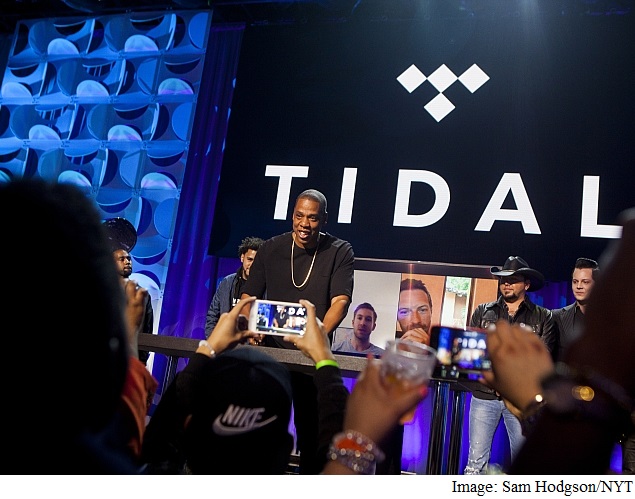 As Jay Z sees it, there is a clear solution to the problems facing musicians in the streaming age. They should band together - behind him, of course.

On Monday, Jay Z, the rap star and entertainment mogul, announced his plans for Tidal, a subscription streaming service he recently bought for $56 million. Facing competition from Spotify, Google and other companies that will soon include Apple, Tidal will be fashioned as a home for high-fidelity audio and exclusive content.

But perhaps the most notable part of Jay Z's strategy is that a majority of the company will be owned by artists. The move may bring financial benefits for those involved, but it is also powerfully symbolic in a business where musicians have seldom had direct control over how their work is consumed.

"This is a platform that's owned by artists," Jay Z said in an interview as he prepared last week for the news conference announcing the service. "We are treating these people that really care about the music with the utmost respect."

The stars stood side-by-side and signed an unspecified "declaration." Jay Z did not speak, but Keys read a statement expressing the musicians' wish "to forever change the course of music history."

Jay Z's plan is the latest entry in an escalating battle over streaming music, which has become the industry's fastest-growing revenue source but has also drawn criticism for its economic model. Major record labels, as well as artists like Taylor Swift, have also openly challenged the so-called freemium model advocated by Spotify, which offers free access to music as a way to lure customers to paying subscriptions.

Tidal, which makes millions of songs and thousands of high-definition videos available in 31 countries, will have no free version. Instead, it will have two subscription tiers defined by audio quality: $10 a month for a compressed format (the standard on most digital outlets) and $20 for CD-quality streams.

"The challenge is to get everyone to respect music again, to recognize its value," said Jay Z, whose real name is Shawn Carter. "Water is free. Music is $6 but no one wants to pay for music. You should drink free water from the tap - it's a beautiful thing. And if you want to hear the most beautiful song, then support the artist."

As a superstar artist and influential executive through his company Roc Nation, Jay Z has unusual power in the music industry. He is said to be courting new artists aggressively to join the service and offer Tidal special material and "windows," or limited periods of exclusive availability.

Yet Jay Z is entering the streaming fray as a boutique competitor against some of the most powerful companies in the business. Spotify has 60 million users around the world, 15 million of whom pay; Apple is expected to introduce a subscription streaming service this year. Last fall, Tidal's parent company, the Swedish technology firm Aspiro, said it had 512,000 paying users.

In addition, the broader market for streaming music includes YouTube and the Internet radio giant Pandora.

Tidal faces other hurdles, like whether Jay Z can attract artists from beyond his inner circle. And while Tidal may have the support of individual artists, in many cases the distribution rights to their music are controlled by record companies.

Lucian Grainge, the chairman of the Universal Music Group, said he welcomed Tidal's arrival. "We like lots of services and we like lots of competition," Grainge said. "Jay is an artist as well as an entrepreneur. He's a winner, and we like winners."

Speaking by phone from Los Angeles - where he was periodically interrupted by parenting duties for his 3-year-old daughter, Blue Ivy - Jay Z described his vision for Tidal as an outlet where musicians and fans "can all just camp out and listen to music," and where artists would "always be on album cycle," meaning in constant promotion mode.

Music executives briefed on his plans were more prosaic, calling it a hub for entertainment content and social media. Other ideas, like links for concert tickets and merchandise sales, have been discussed as possibilities.

Vania Schlogel, a Tidal executive, said that a majority of the shares in the service would be set aside for artists. She and Jay Z declined to reveal specifics about the equity deals. But one executive involved in the negotiations, who spoke on the condition of anonymity because the deals were private, said that participating artists were being granted shares in exchange for their good-faith efforts to supply exclusive content - a sign, perhaps, of the confidence that the artists and their managers have in Jay Z's ability to get things done.

In describing the service, Jay Z emphasized the question of fair play for musicians, calling the current system "criminal."

"Everyone knows that the pay system is unfair to artists," he said. "Everywhere else, everyone gets compensated for their work. Music is everywhere - you consume it every day, everywhere you go. The content creator should be compensated. It's only fair."

Like other streaming services, Tidal pays a small royalty each time a song is listened to. Schlogel declined to comment on the company's rates other than that they would be higher than services that have free tiers supported by advertising.

Last fall, Swift sent shock waves through the music business when she withdrew her music from Spotify, apparently because she did not want it offered free. About a month later, Jay Z approached the board of Aspiro, according to an Aspiro disclosure.

Jay Z dismissed a suggestion that his interest had been prompted by Swift's move, saying that his plans "have been in the works for a year."

Early Monday, artists associated with Tidal began promoting the service on social media through the tag #TIDALforALL. That stirred excitement among fans, although some in the music business and the technology world remain skeptical about Tidal's chances against players like Apple and Spotify.

"I think Jay Z is about to find out the limits of his celebrity," said David Pakman, a venture capitalist and former digital music executive. "I am sure he will lure exclusive content onto the service but that will reach a limited audience."

Jay Z said he was not concerned about the competition as long as he was able to put forth the service that he has envisioned.

"I just want to be an alternative," Jay Z said. "They don't have to lose for me to win."