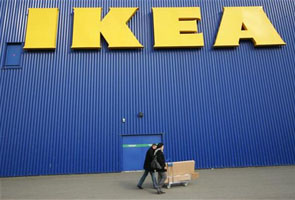 IKEA, known the world over for low-price, self-assembly flat-packed furniture, plans to launch a line of furniture with integrated connected television and sound systems in five European cities in June, throughout seven European countries this autumn, and in its remaining markets in the summer of 2013.

The televisions, wireless sound systems and built-in CD/DVD/Blu-ray players with this line of furniture is designed specifically for IKEA.

"This is a large step for us. We will have an offer that is unique in the market," IKEA's living room chief Magnus Bondesson told Reuters.

"We are launching a new concept where you in one place can buy your furniture and your electronics -- designed for and matched with each other from start."

The furniture aims to solve the challenge of living room clutter of cords and remote controls, he said.

"We've had very clear signals from customers that there is a need to be able to buy and integrate home electronics with the furniture in a simple way," Oncu said.

"With the way IKEA works, the way we can offer our products at the lowest prices on the market, we are convinced that this will be a really big success."

He declined to comment on costs or sales and profit outlook for the new range of furniture.

TCL Multimedia sells televisions and other multimedia electronics under the brands TCL, ROWA, Thomson and RCA, according to its Website. It reported an operating profit of 883 million Hong Kong dollars in 2011, helped by a 46 percent rise in LCD televisions to 10.9 million sets.