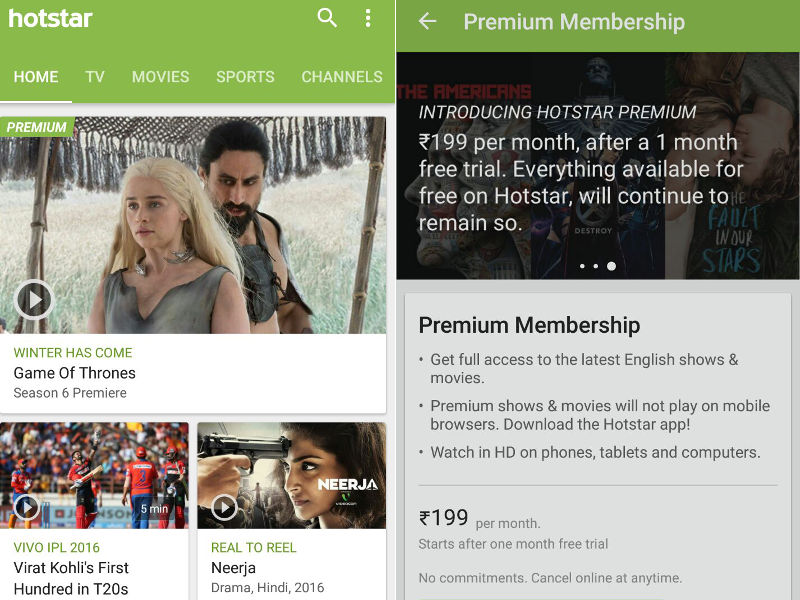 Content streaming service Hotstar has launched a monthly subscription service priced at Rs. 199 a month, which offers a exclusive selection of movies and TV shows.

The service has been launched with the sixth season of HBO's Game of Thrones, which was available on Hotstar minutes after it finished screening in the US.

Hotstar has been retweeting fans of the show on its official handle who are reporting that the footage is uncensored, but hasn't given an official confirmation on whether the service offers an uncensored version of US TV shows and movies. Hotstar's Twitter handle is calling the service 'unspoiled', which could mean that the footage is uncensored, or that it's available minutes after broadcast in the US. It seems like the social team is explicitly evading the use of the word 'uncensored', possibly to avoid controversy.

A total of 36 shows are listed in its premium TV show catalogue, notable names include Silicon Valley, Veep, and The Newsroom. The movie catalogue however, is not so exciting, with a list of around 70 Hollywood movies, the latest are from 2015.

Hotstar works over apps, available on Android and iOS, and also on the desktop, through a Web browser. This membership is currently available only in India, and the service only accepts credit cards as a mode of payment as of now. According to the FAQs, support for debit cards is coming soon, but there's no word from Hotstar on whether digital wallets like Paytm and FreeCharge will be accepted.

Netflix, which launched its subscription service in India earlier this year offers plans at Rs. 500 a month. Other players in this space include Spuul, Hungama, Eros Now, and Muvizz.