At a media event on Tuesday, alongside the launch of two new Nexus smartphones - Nexus 5X and Nexus 6P - and Pixel C tablet, Google announced the refresh of its original Chromecast while also introducing Chromecast Audio. Also unveiled was the refreshed Chromecast app, support for Spotify streaming, and Google Photos support.

Two years after Google launched the Chromecast, a flash drive-shaped device that allows users to beam media content and on-screen activities from smartphones, computers, and tablets to TV and other big screens, the company believes it's time it further expanded in your living room. Enter Chromecast Audio, a device that turns any speaker with an auxiliary input into an Internet-capable device.

Priced at $35 (roughly Rs. 2,300), the Chromecast Audio allows one to stream music to their regular speakers directly from a smartphone or laptop. It is similar to the Motorola Moto Stream portable wireless adapter. It supports high-quality audio, 2 watt RMS and an optional optical digital out that sits in the hybrid port. The company said that the Chromecast Audio doesn't compress audio, assuring the audiophile inside you that the device wouldn't compromise on audio quality. It works with Android and iOS devices, apart from PCs. 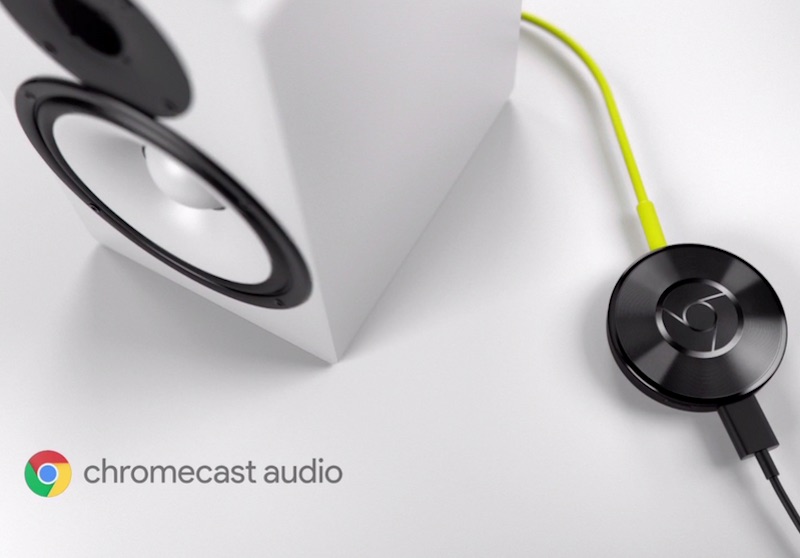 The Chromecast Audio also comes with a feature called guest access, allowing your friends to stream even if they are not connected to your Wi-Fi network. The company also announced that it has partnered with Spotify to support streaming on its new device, as well as the both the old and new Chromecast dongles. Spotify will support multiple users at once, allowing one to skip a song if they don't like it. This feature, however, won't be live until later this year.

The original Chromecast is getting a refresh too. The company has launched the second-generation Chromecast that sees a complete departure from the original's construction. The all new design sees an HDMI cable looped inside a circular Chromecast logo-shaped unit.

The company says that it has upgraded the internal components to make the new Chromecast more capable. There are now three antennas inside the device, and the device supports 5GHz 802.11ac Wi-Fi for stutter-free high quality streaming.

It comes with a new feature called "Fast Play," allowing the Chromecast to start a video or audio streaming much quicker to start, once users press the Cast button. The company also announced that developers will now be able to render a game on both your smartphone's screen and the large screen (TV). Also new if the Feeds feature, which can be controlled via the new Chromecast app, letting users choose what content the Chromecast will display on screen when on standby. This ranges from social media feeds, to image feeds.

Google announced that more content is on its way to the Chromecast. Sling TV, and Showtime are now available for Chromecast while MLB, CBS Sports and other services coming later. For pictures, you will be able to check out Getty Images, Flickr, Facebook, and 500px. Google Photos support was also announced, with the upgraded photo library app.

Unlike the first generation Chromecast dongle, the new media streaming device will be available in three colours - Black, Red, and Yellow. It is launching in 17 countries on Tuesday, and maintains the same $35 price point as the original.Which leaves us to the new Chromecast app, which much like the device itself, is getting a redesign, focused on content discovery. A new section called "What's On" pulls data from YouTube, Netflix and other streaming services to help you keep a tab on what's being aired on TV.