Google Home Wants to Take Over Your Home Entertainment System

Google is pretty serious about its plan to take over your home.

The company on Tuesday offered more details on its smart speaker and home hub, Google Home, as an answer to Amazon's Echo speaker.

But Google - perhaps knowing that it's starting a little bit behind - has been sure to hook the Home into Google's broader suite of services to make the concept of the smart home more affordable.

Home will work with Google's Chromecast video and audio streaming devices - $69 and $35 (roughly Rs. 4,500 and Rs. 2,300), respectively - so that customers can upgrade their current speakers and televisions with little fuss and not that much cash.

When the whole system is in place, users can use their voices to call up YouTube videos on their televisions or ask for a specific song to play through their non-Google speakers.

Home itself will also be able to play music. And the Google Assistant built into the speaker has been designed to be able to find the track you want even if you aren't sure of its name. On stage, Google Home was able to correctly pull up the song "Try Everything" by Shakira, after being asked to play "the Shakira song from 'Zootopia'" - a way of phrasing the query that could sound incomprehensible to a computer that can't tap into the wider world of Google's information. 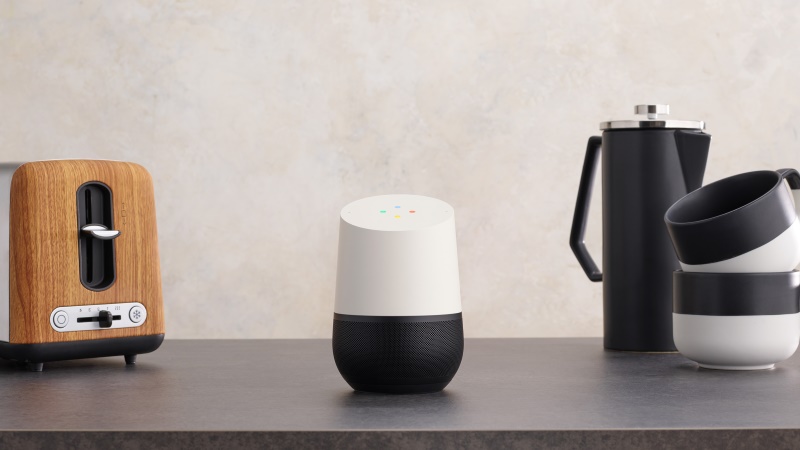 Home is also designed to work with third-party apps, so it will be able to control some smart light bulb systems such as Philips Hue. Google has also worked out partnerships with some services - including Uber, meaning users can order a car by voice.

And the hub has a mute button, if consumers aren't comfortable having the device always listening for the trigger phrase, "Ok, Google."

Home comes in six shades - copper, snow, carbon, mango, marine and violet - and costs $129 (roughly Rs. 8,500). It will be available at the Google Store, Best Buy, Wal-Mart and Target starting October 20 and is available for pre-order immediately.

The company also announced a new system of routers, called Google Wifi. It's a pack of smaller routers that work together, rather than a single router that plugs into your modem. This should help eliminate "dead spots" in your house, by letting you place them more widely throughout your home. It will cost $129 for a single router and $299 for a three-pack. It will be available for pre-order in November at the Google Store, Amazon, Best Buy and Wal-Mart.