Google at its hardware launch event in San Francisco on Wednesday introduced the newest members of the Google Home family, the Google Home Mini and Google Home Max. The smaller Home Mini speaker is meant to be used in more rooms, making the services of Google Home (or the Google Assistant) available to more people in a single house. The Google Home Max is a much larger speaker than the Google Home - it is said to be 20 times as powerful. The company also announced new features for Google Home, and expansion of features like Google Voice Match and handsfree calling to more regions.

As for the Google Home Max, the speaker is priced at $399 (roughly Rs. 26,000), and will go on sale only in December, starting with the US before being made available in other regions. It will be launched in Chalk and Charcoal colours, and will come with a 12-month subscription to the ad-free YouTube Red, which includes YouTube Music. It features 4.5-inch woofers, for much improved bass performance, apart from custom-made 0.7-inch tweeters. The company is also touting the Smart Sound feature, which adapts the audio to where the user is in the room, for the best acoustic performance. It is also covered with acoustically transparent fabric. 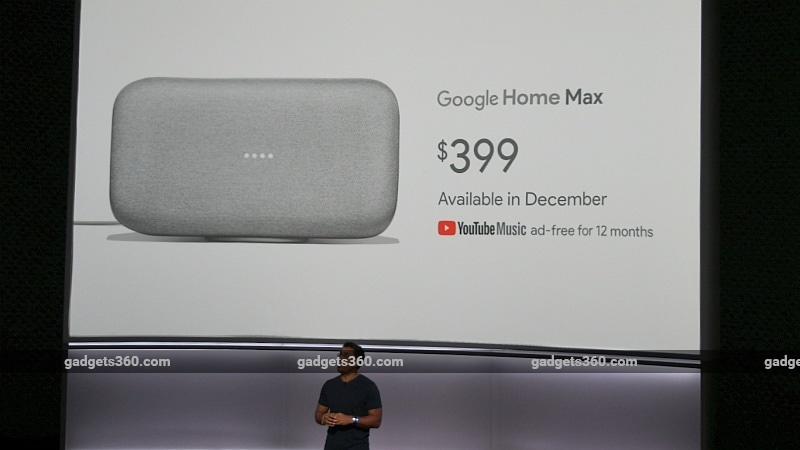 Announcing the new products for the living room was Rishi Chandra, Vice President of Product Management, Home Products at Google. The new features include a broadcast message, like "It's time to leave for school.". Users will be able to broadcast a message across all the Google Home speakers across their house. The company has also announced support for using the Family Link accounts feature Google launched earlier this year, giving parents control over what their children can access.

Chandra added that Google Home Actions, and 'Routines' are now being extended, allowing users to train Home to perform a longer set of actions based on their voice commands. He also announced that Google Assistant works with over 1,000 smart home products, including Nest products.

Google Voice Match - the newly introduced feature that recognises individual voices - will be rolling out to all 7 countries the speaker is available in. The company is also touting improved voice recognition, with the ability to understand children as well. Handsfree calling, which was introduced earlier in the US, will also be coming to the UK, later this year. Google also announced a content partnership with Disney.