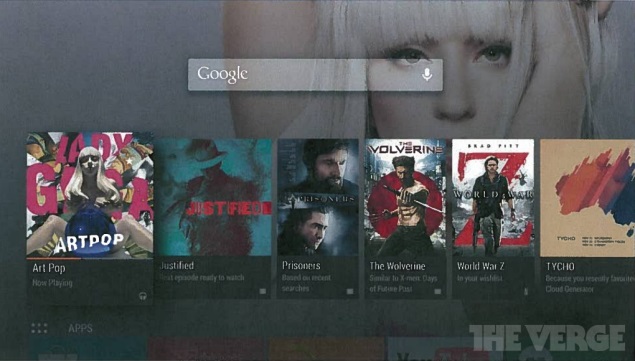 Google had a tough time to find takers for its Google TV platform. However, if a new report is to be believed, the Mountain View giant in its latest attempt to bring its Android ecosystem to the living room has rebranded the service as 'Android TV'.

The Verge claims to have obtained documents related to Google's yet-to-be-announced Android TV that reveal the company's upcoming plans for the new service.

One of the leaked documents defines the service, "Android TV is Android, optimized for the living room consumption experience on a TV screen," and "Android TV is an entertainment interface, not a computing platform."

The Verge reports that some major video app providers are working on the Google's new platform. Further, the report informs that the Google's Android TV will be no different to other services like Apple TV, Amazon's Fire and Roku.

The report claims that the Android TV's interface will include 'cards' as seen in Google Now, for movies, apps, shows and games. The remote is said to come with four-way directional pad to scroll through various options, and optional game controllers will supposedly also be made available.

Further, the report suggests that Android TV will include voice input and notifications; however, it notes that Google is pushing developers to use notifications in limited cases.

The report goes on to claim that Google's upcoming Android TV is very similar to Amazon's recently released Fire TV media streaming device. Amazon jumped on to home entertainment arena with the unveiling of the $99 Fire TV, video and game streaming device.

Another leaked document reads, "Access to content should be simple and magical," and further informs that it would only three clicks or gestures to reach a new piece of content from the home screen.

The report also notes some of the apps seen on the screenshots obtained, including Google's own Play Movies, YouTube and Hangouts, while third-party apps spotted include Netflix, Hulu and Pandora.

Notably, Google first announced its Google TV at the Google I/O event in May 2010, promising to bring a new experience for television that combined the TV with the Internet. The search engine partnered with companies such as Sony, Logitech and Intel to power televisions, Blu-ray players and media boxes with Google TV software. However, the Google TV platform is said to have not taken off because of its complex user interface and limited devices.