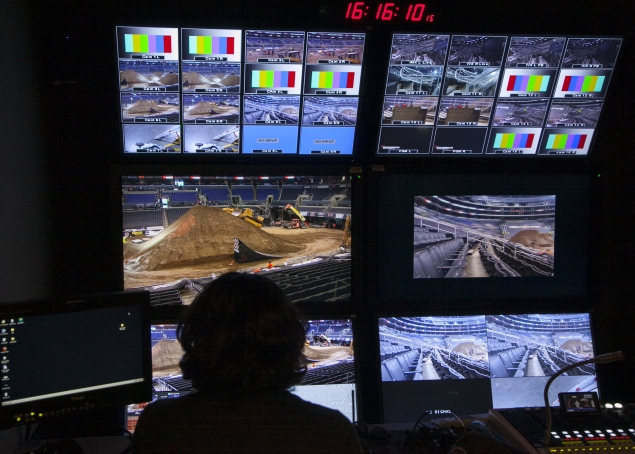 ESPN's announcement that it will shut down its 3-D channel by the end of the year is the latest sign the format won't revolutionize entertainment as the industry once hoped.

Troubling signs for 3-D have been on the horizon for a last year or so. ESPN 3D's audience ratings were below The Nielsen Co.'s measurable threshold, and in March, the Motion Picture Association said box office revenue for 3-D showings in the U.S. and Canada was flat in 2012 from a year earlier at $1.8 billion. The number of 3-D films released in the period dropped by 20 percent.

"The ESPN decision is a sign that the 3-D ecosystem is not healthy," said Laura Martin, an analyst with investment banking firm Needham & Co. "It must be there's not enough demand for 3-D TV."

The sports network said there weren't enough viewers to make 3-D broadcasts worth it. It didn't say exactly how many viewers it had, but the number was "extremely limited and not growing," the network said.

Last year, an estimated 6 percent of TVs in the U.S. were able to show 3-D programming, according to the most recent data from research firm IHS Screen Digest. Even homes that have 3-D TVs don't appear to be using them very much, said IHS analyst Sweta Dash.

The lack of programming and the discomfort of having to wear special glasses could be contributing to the problem, she said.

"It's not convenient for people to watch for hours and hours with glasses," Dash said. "They get tired."

ESPN 3D launched in 2010 as one of nine 3-D channels that followed the release of James Cameron's blockbuster film, "Avatar." TV makers rushed to introduce 3-D sets as well. ESPN said at the time that it expected a "3-D tsunami" in the industry.

3net, a 24-hour-a-day 3-D channel that launched in February 2011 under the ownership of Sony Corp., Discovery Communications Inc. and Imax Corp., appeared to be unfazed by ESPN's announcement.

"Although we don't comment on the activities of other companies, their decision has no impact on our business," the venture said in a statement.

IHS's analyst Dash said there appears to be a bigger appetite for 3-D TVs overseas in markets such as China.

TV manufacturers have recently switched their focus from 3-D to "ultrahigh definition," a format that increases the pixel count of high-definition TVs by four times.

At the International Consumer Electronics Show in January, companies like Sony, LG Electronics Inc., Sharp Corp., and Samsung Electronics Co. all showed off so-called "ultra HD" sets that were meant to be within the price range of middle income early adopters. Sony's 55-inch (1,400-millimeter) model sells for $5,000.

One benefit of the ultra HD format is that viewing doesn't require special glasses, and because people can sit closer to the screen without a loss in quality, bigger screens can replicate the immersion of 3-D video.

Ultra HD is also easier to handle on the production end.

With 3-D TV, two cameras have to be rigged together on a special mount to create the 3-D effect. And because viewers can get dizzy with quick cuts, camera operators specialized in 3-D stay focused on single shots for longer. That makes it hard for producers to simply use "one eye" of a 3-D camera for 2-D broadcasts. Instead, camera positions and personnel costs were just multiplied for events shot in both formats.

Along with higher costs, any viewing on 3-D platforms draw viewers away from the standard broadcast, said Rob Willox, director of large sensor technology for Sony Electronics, in an interview last month about the differences between the two formats.

"There are a lot more costs, and you're not increasing audience share, you're dividing it," he said.

In contrast, ultra HD video is more easily scaled down to regular HD, meaning that high-end cameras can be used for viewers watching on TVs of either standard.

Even as it made plans to close down its 3-D channel, ESPN said it was a leader in 3-D productions, having produced 380 events in 3-D over the last 3 years.

"Nobody knows more about sports in 3-D than ESPN, and we will be ready to provide the service to fans if or when 3-D does take off," it said in a statement. "We continue to experiment with things like ultrahigh definition."