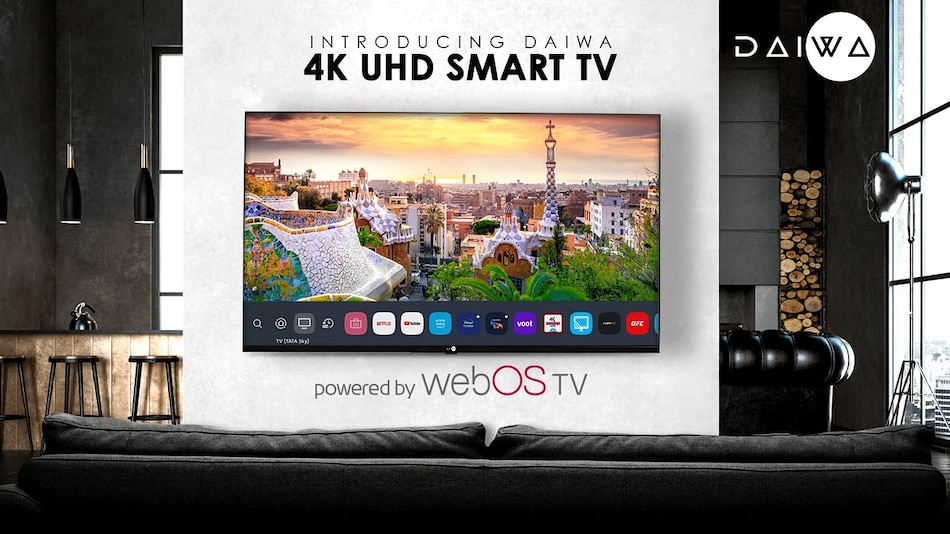 Daiwa D50U1WOS smart TV has been launched in India and it claims to be the first 4K TV running LG's webOS TV, aside from LG itself. Daiwa D50U1WOS also comes with ThinQ AI and a Magic remote that is included with several LG smart TVs as well. The Daiwa TV sports a bezel-less design with 96 percent screen to body ratio along with a host of features like HDR10 support, MEMC technology, Dolby Audio, and more. The TV is powered by a quad-core processor and a Mali GPU.

Daiwa D50U1WOS is priced at Rs. 43,999 for the sole 50-inch model that the company says is the first in the series. It is available for purchase at leading retail stores in India and the official website.

It is powered by a quad-core ARM CA55 processor clocked at 1.1GHz, paired with the MALI G31 MP2 GPU. It comes with 1.5GB of RAM and 8GB of storage. It runs on LG's webOS TV and has ThinQ AI voice features built in. Daiwa D50U1WOS supports HDR10, HLG, and MEMC feature. The audio is handled by 20W box speakers that support Dolby Audio. The TV allows LG ThinQ smartphone app control for Netflix, Youtube, Prime Video, Disney+ Hotstar, Zee5, SonyLiv, and other OTT services. It uses the app for voice control, using it as a remote, and manage devices.

For connectivity, the Daiwa D50U1WOS TV come with dual-band Wi-Fi, Bluetooth v5.0, three HDMI 2.0 ports, two USB 2.0 ports, Ethernet, Optical Output, earphone jack, RF In, and AV In. The Magic Remote that comes with the TV is the same that you get with LG's smart TVs. It supports Air Mouse technology and has a scroll wheel in the middle as well as a dedicated voice assistant button. In terms of dimensions, the Daiwa D50U1WOS TV measures 1,120x90x655mm and weighs 9.4kg without the stand.