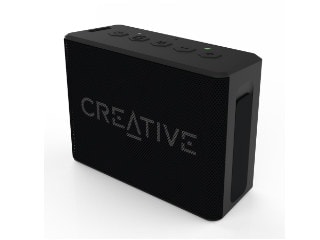 Creative Technology on Thursday expanded its portfolio of portable speakers in India by launching the Creative Muvo 1c. The new palm-sized Bluetooth speaker features a dust and splash-resistant (IP66-rated) build and sports two pro-tuned drivers alongside a passive radiator. With a price tag of Rs. 3,499, the Creative Muvo 1c will go on sale through Flipkart by the end of December. The Singapore-based company has also launched the Creative Chrono Bluetooth speaker with a price tag of Rs. 5,999.

The Creative Muvo 1c features an oversized radiator to enhance bass production. There is also full-range speaker driver that collaborates with the radiator to produce a surround sound experience. Additionally, the Bluetooth speaker has the ability to deliver stereo sound using Stereo Wireless Link technology. This allows users to connect up to two Muvo 1c speakers to get wider sound.

Alongside music playback, the Creative Muvo 1c can be transformed into a speakerphone and help users attend their incoming calls while playing their favourite tracks. The speaker has a 3.5mm AUX-in connector and Micro-USB in addition to Bluetooth connectivity. It is claimed to deliver up to six hours of battery life on a single charge.

The Creative Muvo 1c works with the Sound Blaster Connect app that is available for Android and iOS devices. The app provides an interface to let users view, browse, and play songs via the microSD card inserted into the Muvo 1c speaker right from their mobile devices. Similarly, there is the Sound Blaster Control Panel software for Windows-running PCs and Mac devices that enables customisation of audio on the basis of acoustic profiles and EQ settings.

In addition to the Muvo 1c, Creative has launched the Creative Chromo as its portable Bluetooth speaker with Radio alarm clock features. The speaker has an IPX5 splash-resistant body and includes a full-range driver as well as a passive radiator. It packs a battery pack that can last for up to eight hours.

A couple of features distinguish the Creative Chrono with the Muvo 1c. Firstly, there is an LED digital clock display that comes with customisable alarm functionality. Secondly, the speaker has a built-in FM tuner with up to 50 station presets.

The Creative Chrono has a microSD card slot that supports MP3, FLAC, and WAV. Also, it works with the Sound Blaster Connect app and can be used as a speakerphone.