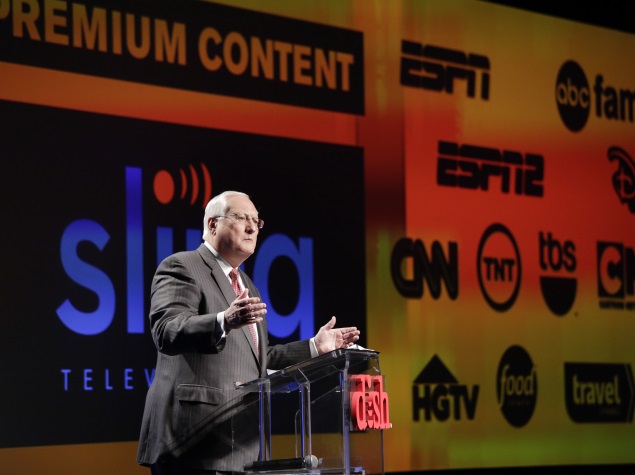 One of the biggest changes in American television this year will be more channels being available online with no separate cable or satellite subscription. But for viewers itching to drop cable, watching sports has been the Holy Grail.

Here are the television-related highlights from the International CES gadget show in Las Vegas on Monday. The four-day show formally opens on Tuesday.

Cable tv channels - without the cable or satellite service
Dish will offer a package of channels, including ESPN and CNN, starting at $20 a month. The availability of ESPN as part of the Internet package addresses a major reason people were loath to "cut the cord" - live sports.

The company said it isn't worried that its current subscribers will cancel satellite service in favor of the cheaper Internet package. Rather, Dish is hoping to lure those who don't pay for TV channels at all because they find it too expensive.

"A lot of big incumbents don't like change, but everything else is changing around you," says Joe Clayton, Dish's CEO. "Technology is broadening the consumer viewing opportunity, and they are taking advantage of that."

Sony Corp. also has an Internet television service, PlayStation Vue, expected to debut by the end of March, with channels from Viacom, Discovery, CBS, Fox, NBCUniversal and Scripps. HBO and Showtime already have announced plans for stand-alone Internet offerings, and CBS launched one in October. Those don't include live sports, though.

The Dish offering, dubbed Sling TV, will launch in a few weeks and also include channels from Disney, Scripps and Time Warner's Turner. About 20 channels will be available, such as the Disney Channel, ABC Family, the Food Network, HGTV, the Travel Channel, TNT, TBS and the Cartoon Network.

Sling TV is not to be confused with the SlingTV device that allows viewers to watch TV remotely. Sling Media, the maker of that device, is owned by EchoStar Corp., which was spun off from Dish in 2008.

The $20 price for Dish's basic package will be far cheaper than what people would pay for a cable or satellite. (Dish said its average monthly bill is about $85.) Dish says it keeps the Internet service cheap by excluding most over-the-air network channels, which can be costly for pay-TV providers as broadcasters demand higher fees. An Internet service also won't require special equipment, such as a satellite and receiver dishes.

For those who want more than the basic channels, Dish will offer various add-ons for $5 each, including extra channels for sports and a package for kids. The catch: Only one person can watch at a time. Family members who want to watch different channels simultaneously will need separate subscriptions.

Meanwhile, Dish is adding Netflix and other video apps to its Hopper set-top boxes, so viewers can watch both traditional channels and online video services through the same device. And anticipating that more Internet video will be shot with an increased resolution known as 4k, Dish is adding 4k capabilities to its Joey devices for multi-room viewing.

Efforts to boost tv sales
Now that 4k TV sets have dropped in price, with some models available for less than $1,000, TV makers are looking for ways to make their sets stand out.

Also known as Ultra HD, 4k offers four times the sharpness of today's high-definition video. Sharp is turning to an engineering trick to make its high-end 4k set look even sharper. While TVs typically show colors by mixing red, green and blue subpixels, Sharp's top-of-the-line model will add yellow as a fourth subpixel to improve colors. It then splits each of those subpixels in half, creating a total of eight subpixels in the space of three. 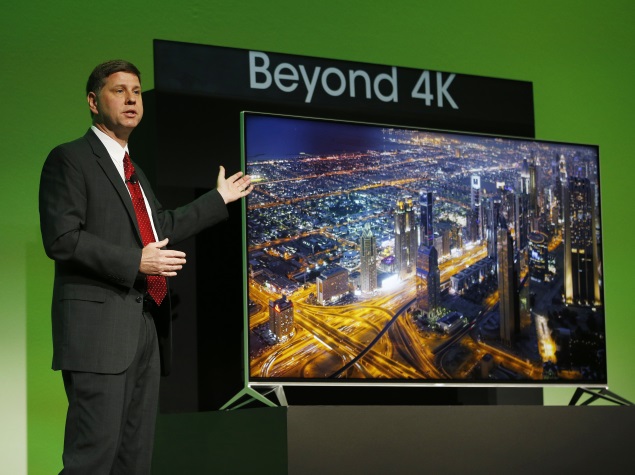 Content isn't yet available to take advantage of those extra subpixels, but Sharp uses some mathematical formulas to fill in the blanks. Sharp says it's not as good as having content with the higher resolution, but it's better than regular 4k.

The Aquos Beyond 4K Ultra HD TV will measure about 80 inches diagonally. It will be out in the second half of the year. The price hasn't been set.

Beyond improving picture quality, TV makers are enabling Internet video access right from the set. Sharp is incorporating Google's Android TV software so that viewers can use a variety of streaming apps, such as Netflix and Hulu, without a separate device. LG has something similar with webOS software developed by smartphone pioneer Palm. And even as Roku sells stand-alone streaming TV devices, the company said it has licensed its software to Haier and Insignia, joining previous partners TCL and Hisense.

Roku said it is also working with Netflix and TCL to enable 4k streaming content.

Online and traditional tv converge
To address the growing availability of online video, TiVo's digital video recorders will soon offer new menu options to bring Internet and traditional TV programs in one place, so past seasons of ongoing shows are easier to find on Netflix or Amazon. Streaming through TiVo was already possible, but shows weren't as centrally located.

The SlingTV device for viewing television on-the-go is adding functionality for in-home use: a YouTube app for streaming video on regular TV sets without needing a separate streaming device. It won't have an app for the Dish's new Sling TV service, though.